When I found out that FC Barcelona would be playing a home soccer game while I was in town, I had to snap up a ticket. Barca (look at me using nicknames) is currently considered the best soccer team in Europe and I didn’t want to miss the chance to see them play in their 100,000-seat home stadium. Even better, it was a Champions League game against FC Celtic from the Scottish Premier League.

[I do not warrant that anything in the previous paragraph is accurate.]

On the day of the game I went for a walk down Las Ramblas to the port area. It’s one of the most heavily touristed parts of Barcelona and it was crawling with Celtic supporters. They were not shy about wearing their green and white striped shirts and scarves and socks and parading around chanting for their squad. Imagine if Waldo from “Where’s Waldo” wore green. That’s what they looked like. And they were out in force. I would have guessed that a few people might make the trip down from the UK for the game, but not “All of Scotland.”

SIDEBAR: A British friend of mine tells me that the stripes are not referred to as stripes, but hoops. Oh those wacky Scots. 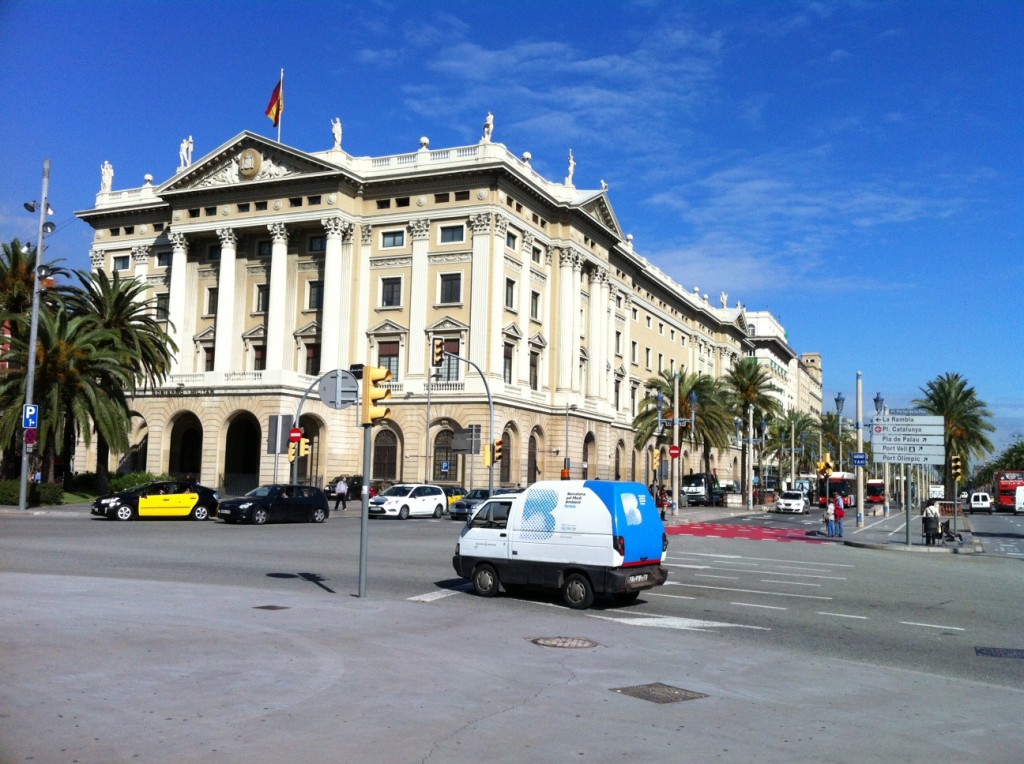 ABOVE: Gratuitous Barcelona picture. Would have been much cooler if I’d actually taken a picture of the Scottish fans who were pretty much standing everywhere except for where I was pointing my camera. I’m no Ansel Adams.

The stadium is only two metro stops from my apartment, but I gave myself a full hour to get there in case of delays. As it turned out, I’m glad I allowed so much time because as usual when I got off of the metro I had no idea which direction I was facing. You’d think it would be hard to miss a 100,000 seat stadium, but it was nowhere to be seen. I ended up following a couple of guys off the subway who were wearing soccer jerseys, on the theory that they were probably on their way to the game. After a few twists and turns and side streets it occurred to me that maybe they weren’t going to the game and I was about to get hopelessly lost — or they saw me following them and were trying to shake my tail — but after a few minutes we turned a corner and the stadium loomed up ahead, surprisingly close.

The crowds around the stadium were THICK. Trying to cram 100,000 people onto narrow residential sidewalks is not easy. The Celtic fans were out in full force, and I tried to fight my way through them and find the right entrance. My ticket said entrance 4, and I was walking past entrance 21. After a false start in the wrong direction, I made the long walk around the stadium, through masses of humanity, all of whom were chain smoking, until I found my way in. I got to my seat with about 15 minutes to spare.

The stadium is ginormous. It’s also pretty dated. Two small scoreboards on either end and a Jumbotron that was neither very jumbo nor very tron. But the field was absolutely the most gorgeous green grass, and my seat was just above one of the corners. 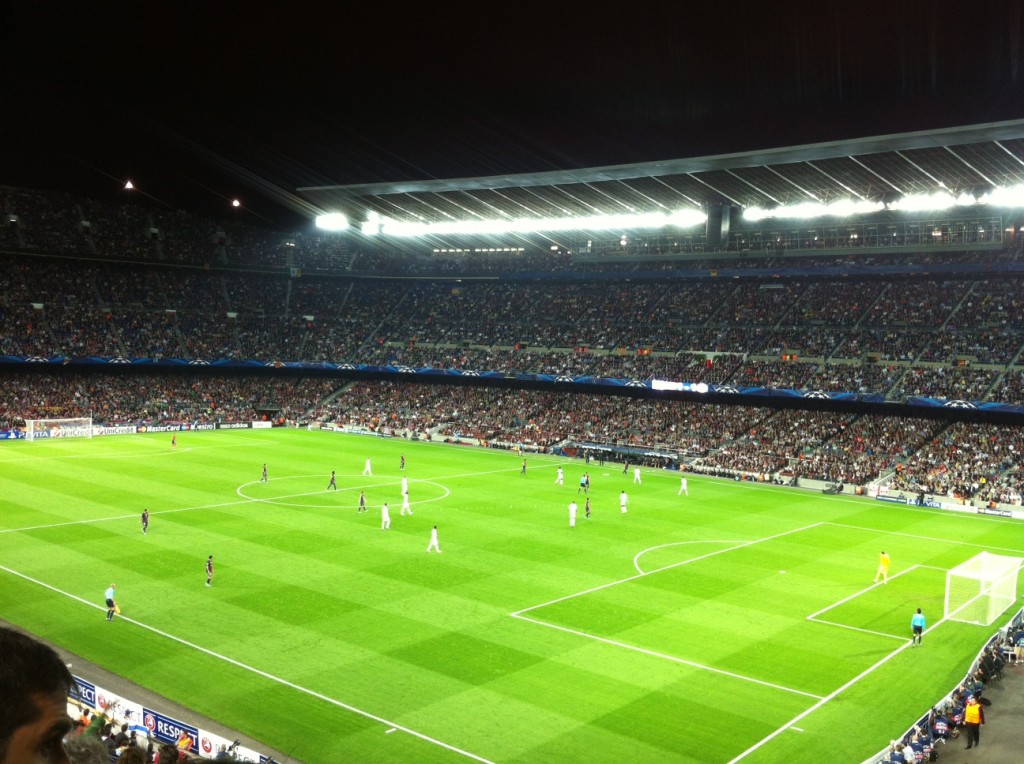 A huge section of Celtic fans was in the upper deck — there were easily several thousand who had made the trip. In theory, visiting fans are all supposed to purchase a special pool of tickets and be quarantined in one section, the better to prevent scattered riots from breaking out in the stadium. In reality, while there was a huge throng in the Celtic section, many other hoop-clad fans were scattered throughout the stadium.

Although starting times for many performances in Spain seem to be more of a suggested retail price, the game started at exactly 8:45 p.m. on the dot, just as scheduled. There was little fanfare — just a singing of the FC Barcelona fight song and we were underway.

FC Barcelona is good. Really, really good. Amazingly good. In fact, they’re like no soccer team I’ve ever seen before. Every single player is the best passer and ball handler you’ve ever witnessed, and they play a patient, ball control game with dozens of quick passes, long and short. Pretty quickly it became clear what the teams’ respective strategies would be. FC Barcelona was going to pass and pass and pass and probe and look for an opening to try to get a good scoring chance. And Celtic was going to pack nine players onto the defense and try to keep them from scoring. I am not exaggerating when I say that, after the opening kickoff, Celtic did not touch the ball for the first five minutes of the game.

In the 18th minute, Celtic finally got possession of the ball in the Barca end, and after being fouled they lofted a free kick into the box and…

The ball deflected off of a Celtic player and a Barcelona player’s shoulder into the net. Barcelona looked shocked, the Celtic fans went wild and Celtic had a 1-0 lead. To put this into perspective, some bookmakers had Celtic as a 45-1 underdog coming into the game.

The ball control game continued for the rest of the half, with Xavi controlling the middle expertly and trying to set up runs for Argentinean forward Lionel Messi, who is considered by many to be the best player in the game. It looked like Celtic would hold their advantage going into halftime, but in the 45th minute Barcelona snuck a pass through to a forward who banged in the equalizer. All square at the half. The possession statistics: 75% for Barcelona, 25% for Celtic. And that was generous. It was more like 75% for Barcelona, 20% Barcelona retrieving the ball after stealing it, 5% Celtic. Total passes for the first half: Barcelona 448, Celtic 81.

Halftime entertainment: nada, but I can report that Call Me Maybe is every bit as popular in Catalunya. As the second half rolled along, Barcelona kept trying and trying, passing around and occasionally geting a shot off, but Celtic continued to thwart their scoring chances. In the 90th minute Barcelona worked the ball in and banged a shot off the post, and it looked like Celtic would hang on for the tie.

There were four minutes of stoppage time added on, mostly due to some time-killing phantom injury shenanigans from the Celtic players. Barcelona had a renewed sense of urgency, and as the clock ticked past three minutes Celtic banged the ball all the way down into the Barcelona end. The goalkeeper ran to keep the ball from going out of bounds and lofted it back high into the Celtic end. With just seconds left, Barcelona executed a neat series of passes, snuck a player behind the defense on the left side and banged in a cross for the winner. The Celtic players fell to their knees in agony as the crowd went wild, save for the Celtic faithful who were stunned.

After the restart there were only a few seconds before the referee ended the match and the Barcelona fans and players celebrated in relief. An announcement in the stadium requested that the Celtic fans remain seated until notified, presumably to prevent fans of both teams from exiting at the same time and potentially getting into a riot situation. All in all, the Celtic fans seemed to take it well. They didn’t seem riot prone.

The statistics on the scoreboard were in English. I have no explanation for this. Either they were being polite to the visiting team or their Jumbotron scoreboard only speaks English.

For that size of a crowd, they were surprisingly subdued. The Portland Timbers crowds are infinitely more raucous, and the Celtic fans were able to drown out the Barcelona fans for much of the night even though they were outnumbered twenty-fold.

Twenty-Fold would be a good name for a movie about blackjack. Matt Damon needs to get on that.

It was about 70 degrees at game time, and maybe dropped to 68 during the game. Most of the crowd was bundled up like they were at Lambeau Field in January.

For a full description of the match, in a style of writing that is pure poetry, you must read this. Or this.