So here I am in another Spanish-speaking country. For those keeping track, this adds another recent stamp to my passport that also includes Mexico (three times), Nicaragua, Argentina, Spain and a Chipotle Grill in Buffalo. The Spanish here is amazingly easy to understand, and the people are incredibly nice. The Costa Rican catchphrase is “Pura Vida,” which is an all-purpose way of saying “It’s all good.” My Spanish is also getting better, notwithstanding the fact that I tried to tell somebody today that I was a sly fox and I ended up telling them that I was a tiny parrot.

Hadas and I have been planning this trip for several months — I have spent hours arranging lodging, rental car and itinerary, and she has spent hours squealing at pictures of sloths. And also monkeys. And hummingbirds. And snakes. And frogs. And probably ants. Today she spent several minutes during breakfast imitating Costa Rica’s myriad bird calls and probably confusing the chef into thinking there was a grackle in the dining room. Bringing an animal enthusiast like Hadas to Costa Rica is like taking a crack addict to the crack store.

[Note to self: do a Google search to find out where one buys crack.]

So far the only wildlife we have seen is the slobbery little dog at our B&B, and Hadas is one more glass of wine away from constructing a makeshift wearable toucan beak out of a box of Froot Loops and flying the pooch around the swimming pool squealing “Follow your nose!’ She tells me the dog is a Bichon Frise, which is French for “Tiny Parrot.” 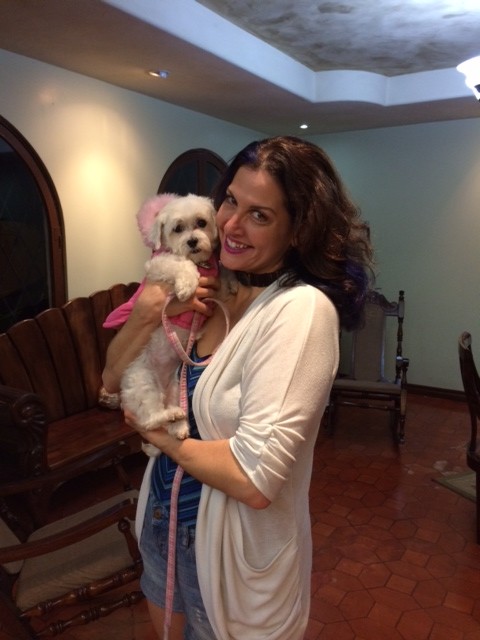 Yesterday’s travel day got off to an inauspicious start when I found out my 8:00 a.m. flight was delayed until noon, which would cause me to miss my connection in Dallas and not make it to Costa Rica until the next day. Luckily, a quick call with American Airlines got me rebooked on a US Airways flight through Phoenix, which would actually get me to Costa Rica earlier than planned. When I walked over to the US Airways desk and announced that I had been re-booked on their flights they regarded me with the same kind of suspicion as if I had invited them to root around in my pants for a Bison Friche.

Ah US Airways! A company that consistently makes the list of US airlines that are still operating. J.D. Power and Associates ranks then #1 for “Seats that don’t recline because they are in front of, behind or on the same aircraft as an exit row.” US Airways combines the customer service of the IRS with the luxury of a 3rd-class commuter train in Bangladesh. It’s the airline where they assign Federal air marshals to prevent the flight attendants from attacking the passengers.

Ha, I kid. It was a perfectly comfortable flight and the flight attendant even anticipated that my request for “Orange juice, no ice” meant “Orange juice with enough ice to create a 3rd-grade science fair diorama of Greenland.” Luckily, I had been switched from a Priority Boarding window seat on American Airlines to a Boarding Group Infinity middle seat on US Airways, so I got to enjoy the delicious mix of emotions that cattle must feel during their daily routine, only with a decidedly inferior in-flight magazine.

I had an hour layover in Phoenix, where I grabbed a salad for lunch in an extremely non-gay fashion so as not to invite being denied service due to religious exemptions.

The five-hour flight to San Jose, Costa Rica was uneventful, and the US Airways in-flight movie was “Ha ha ha ha … read a book.” They did come down the aisle with a desultory Duty Free cart selling cigarettes, because due to the timezone change it was 1954.

Passing through customs in San Jose was smooth sailing and within a few minutes I was on the shuttle bus to Dollar Rent-a-Car, where I rented a tiny SUV that looks like Baby’s First 4WD. It comes with a gearshift lock, which would probably be more effective if a potential thief couldn’t just fit the entire SUV in his pocket. Unlike in the USA, I sprung for all of the insurance coverage, so I’m pretty sure I’m bringing the 4WD back as a convertible.

Finding the B&B was a challenge. First of all, it was night. Second of all, I was tired. Third of all, Costa Rica doesn’t have street signs or in many cases street names! The directions I was given read like something out of The Lord of the Rings, and it took me almost as long as the Deluxe Director’s Cut Box Set to find where I was going. After multiple wrong turns, double-backs, loops, u-turns and second breakfast, I finally found Casa Primo (Spanish: “House of the Tiny Parrot”), where the bubbly Costa Rican proprietor greeted me with a warm handshake and a 20-minute conversation about TeamSnap, the new economy, the veracity of TV’s Shark Tank, and her idea for an internet business selling dog clothes. She also showed me to our suite, which had a lovely display on the bed of two towels folded into kissing swans, adorned with chocolates and rose pedals. Don’t tell Hadas, but I think we might be in the Honeymoon Suite. Or as she calls it, the Divorce Concourse.

After four hours of fitful sleep I drove back to the airport, by way of Guatemala, to pick up Hadas, who was flying in separately due to shenanigans that you can read about in her blog. Today was spent napping off the travel and working, since this week is a working vacation for the both of us and next week is vacation vacation. I would describe the internet in this B&B as “US Airways-quality.”

Tonight we had dinner at an Argentinean restaurant, continuing my pattern of eating cuisine that is offset by two vacations from where I am actually located. Nine months from now I expect to enjoy Costa Rican delicacies in Vietnam. We both had the pollo deshuesado (“boneless tiny parrot”).

[Note: In October, Hadas and I went to Mexico and decided to write he-said, she-said versions of our blogs about the trip. Unfortunately, due to technical difficulties (technically, I’m lazy), that didn’t happen, so we’re trying again on this trip. You can read her blog at klutzinmypants.wordpress.com.]