It turns out that Colombia is more dangerous than I thought. A man tried to kill me on Saturday.

That man was Daniel, the guide for my Medellín bike tour.

When I signed up for a half-day Medellín bike tour I assumed it would be a nice relaxed pedal on fat-tire cruiser bikes along tree-lined paths, stopping every few blocks to let the panting, out-of-shape tourists at the back of the pack catch up. What I didn’t expect was grinding up hills on high-end mountain bikes and then bombing through busy freeways and on ramps in downtown Medellín with cars whizzing by inches away on either side. Basically, the panting out-of-shape tourist at the end of the pack was … me.

Daniel’s been running bike tours in Medellín for a few years now. I caught a taxi to his apartment, using the EasyTaxi app to summon a cab to the front door of my condo in about one nanosecond. EasyTaxi is said to be safer than hailing a cab on the street, though I think “Robbed by taxi driver” is one of those travel urban legends like “Enjoyed flying on US Airways” that has been overblown. Nonetheless, there’s something fun about pressing a button on my iPhone and having a driver pull up in less than a minute. I’m pretty sure this must be what it feels like to be Donald Trump.

Anyway, joining me on the bike tour was Chris, a 50-something Californian who is here on a “journey of self-discovery.” He’s apparently interested in “affecting change in our world from a grass-roots level,” but right now he’s “taking time out to really get in touch” with himself. If I told you he lived on a houseboat in the Bay Area, I bet you would not be surprised.

The final member of our pack was Prahlad, a mid-20s New Yorker from India who currently lives in Bogotá and works in fraud prevention at Citibank. He came directly to the bike tour after landing at the airport, and apparently had already set up a date for the evening, which confirmed my suspicion that he had a lot more game than the rest of us combined. 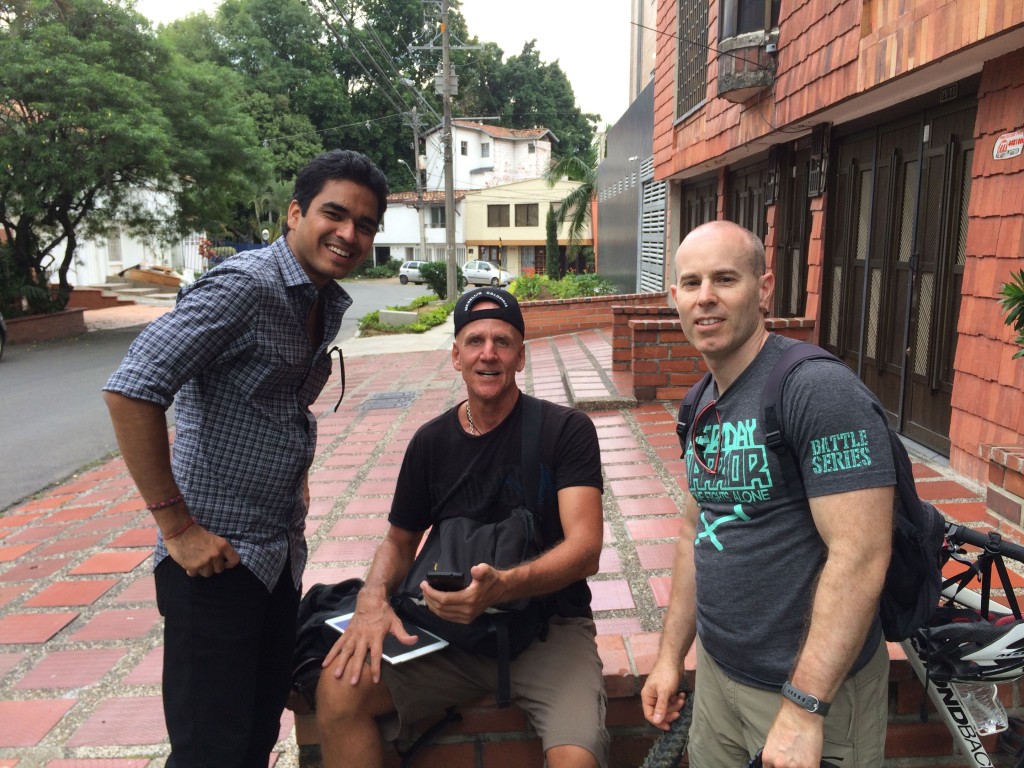 After getting outfitted with helmets and gloves, and signing a release form that I probably should have read more closely because I’m pretty sure it included phrases like “inadvertent decapitation” and “repatriation of remains,” we set out on our ride. Daniel advised us to keep close and watch his hand signals carefully. He showed us the signals for “Follow me,” “Wait for traffic to pass,” and “Oh my god there’s a bus heading right for you!”

Just kidding. There’s no point in a signal for that. There was constantly a bus heading right for me.

The first stop on our tour was the Cerro El Volador mountain, which I had just hiked on foot the day before. To say that my sea-level adapted lungs were not keen on pedaling up a grueling incline on a heavy mountain bike would be an understatement. I made it about 1/3 of the way up before I had to dismount and do the walk of shame, pushing my bike to the top. When I finally reached the summit we took a break while Daniel pointed out the key neighborhoods of the city, regaled us with tales of Colombian women’s penchant for plastic surgery, and dropped the factoid that Cerro El Volador was the city’s prime dumping ground for bodies during the drug wars. I decided to wait and refill my water bottle somewhere else.

We re-mounted our bikes and bombed down the mountain at high speed, then made our way to downtown by merging our bikes directly through a busy intersection where a two-lane highway merged onto a four-lane superhighway, weaving in and out of cars while buses and motorcycles shot past at maximum speed. I’ve done a lot of stupid things on my previous travels – ziplining, rappelling, snorkeling, renting from Alamo – but this was by far the most dangerous. At one point we were weaving through speeding taxi cabs in a sketchy downtown neighborhood, leading to a possible scenario where one could be run over by a car and subsequently robbed by a pedestrian at knife-point.

We took a break for lunch at the Botanical Gardens, where Daniel recommended ordering a salad so as not to get overly filled up. I ordered a 12,000-calorie plate of food in the interest of not passing out. Chris told us about his plans to discover the meaning within himself, while Prahlad thumbed through pictures on Tinder (I’m presuming).

Properly fueled up, we headed out for the second part of the tour, which consisted of bombing through dedicated bus lanes, dashing across freeways on foot and stopping every three or four feet for me to catch my breath while Daniel shared anecdotes and historical tales about the city. I would recount these to you if I hadn’t had a stroke while riding.

The next day was Sunday, and I was excited because it was Ciclóvia. Every Sunday in Medellín (and many other cities around Colombia), they close down a number of major streets to cars from 7 a.m. to 1 p.m. and make them into giant bike-and-running paths. For those who live in Portland, it’s like our once-a-month Sunday Parkways, only here it happens every week and they close down 25 miles of streets. And these aren’t dinky side streets — these are major thoroughfares through the heart of the city.

My AirBnB comes with a bike, but when I tried to lower the seat I realized that it was jammed. I also found that the front brakes were stuck shut. The bike did not seem rideable. Undaunted, I threw on my running shoes and walked over to Avenida del Rio for a jog along the river. As advertised, there were tons of people out biking, running or rollerblading this long stretch of highway. It was fantastic.

After a short run I was pretty pooped, so I came back to my condo and decided to have another go at the bike. By turning it over and pile-driving the bike seat repeatedly into the ground, I managed to unstick the seat post and get the bike adjusted to an appropriate height. It’s probably good that I’m not a chiropractor. I also undid the front brakes entirely, figuring no brakes was better than a wheel that wouldn’t turn. Thus outfitted on a rickety, squeaky, poorly-adjusted, unstoppable death trap, I headed out for a ride.

On my way back toward the Ciclóvia I ran smack dab into the start of a city-sponsored community ride called Ciclopaso Por Los Derechos De Las Mujeres (“Ride for the Rights of Women”). I thought what the heck, and merged in with the group of 500 or so riders for the free event. It was a slow-paced ride, which was good because the bike I was on had the acceleration of an anchor. One older gentleman was doing the ride with a dog perched on his shoulders: 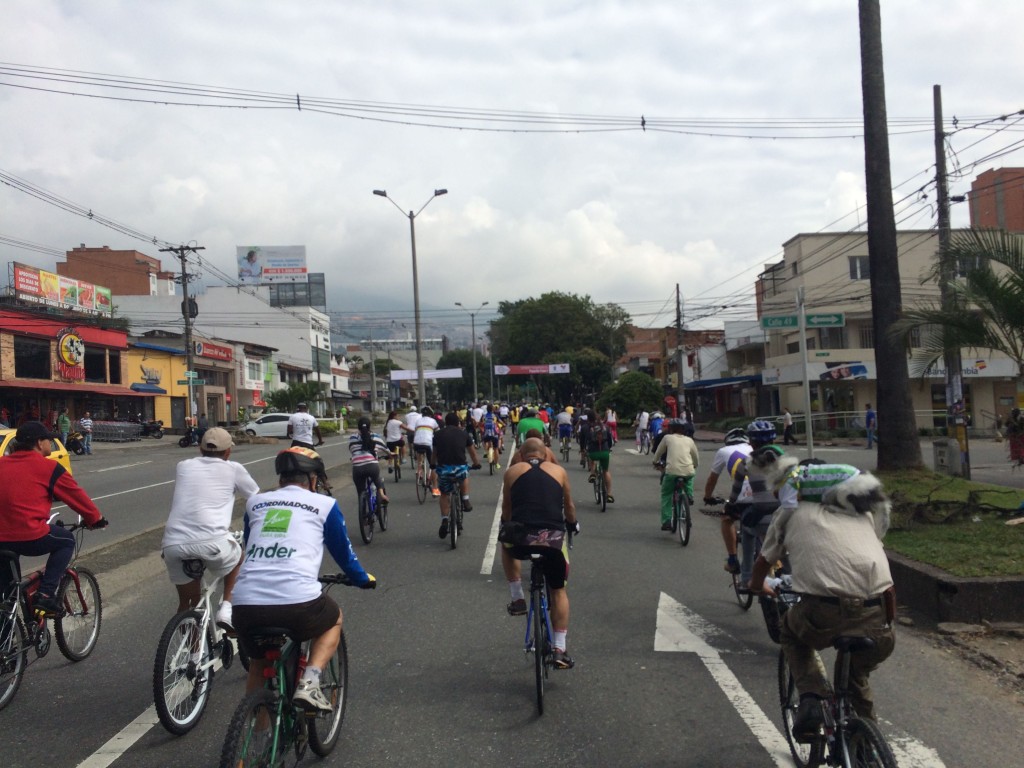 There was much cheering and good spirits on the ride, and every mile or so the entire pack would slow down to allow the stragglers (i.e. me) to catch up. Then our motorcycle escort would head out again and block traffic as we rode through Medellín’s streets.

After an hour of riding, we passed right next to Cerro El Volador, and I began to have nightmares of a third trip up the mountain in three days. Luckily, we only skirted the mountain and eventually made our way to downtown, where we stopped near the science museum for a brief rest and bags of water (which sounds goofy, but cleaning up 500 bags of water is so much faster and easier than 500 plastic water bottles). 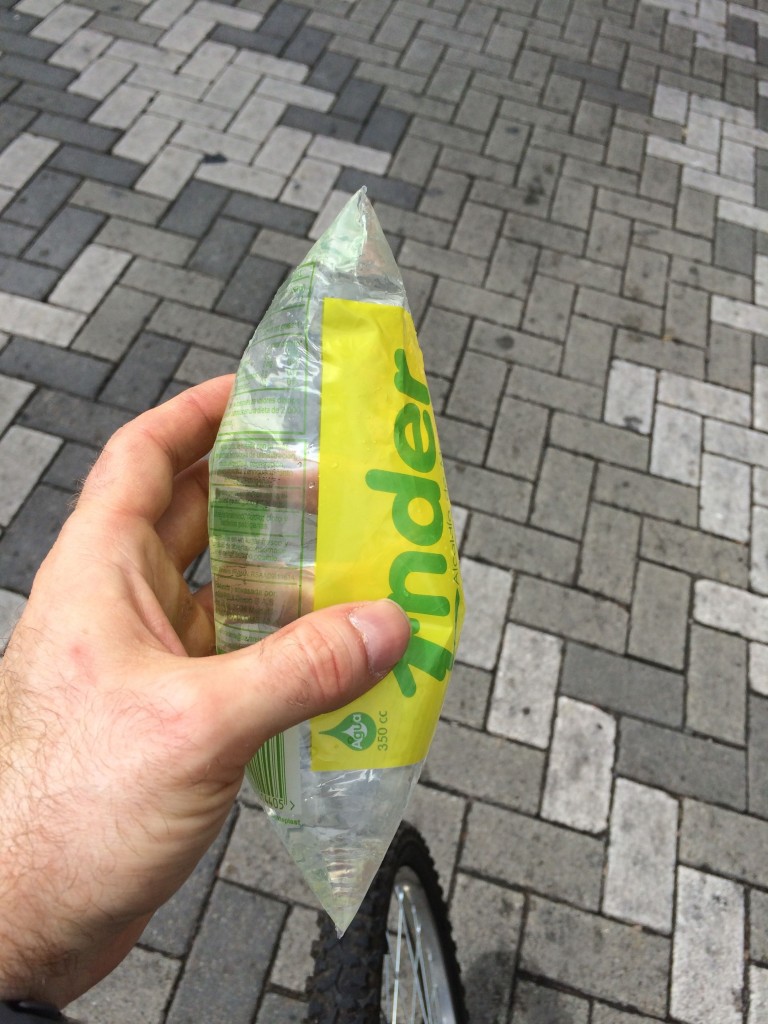 After two hours of riding, it occurred to me that maybe I should have asked how long the ride was before I joined in. Maybe I misunderstood the title of the event and it was the Ride Until Women Have Achieved Full And Equal Rights. I probably should have brought a snack.

While crossing back over the river toward what I presumed would be the end of the ride, my legs finally threw in the towel and said “Nope, here’s where we cramp.” Two and a half hours of hammering in the sun on a $15 bike will do that to you. I was stopped flat, my legs so cramped that I couldn’t even take a single step. After some self-massage and stretching, I was finally able to gingerly walk my bike the mile back home.

In two days I rode more than the last three years combined, and Medellín’s bike culture made me feel right at home. Like Portland, it’s a community that loves to come together for cycling. Unlike Portland, the people here apparently wear clothes while riding. Go figure. 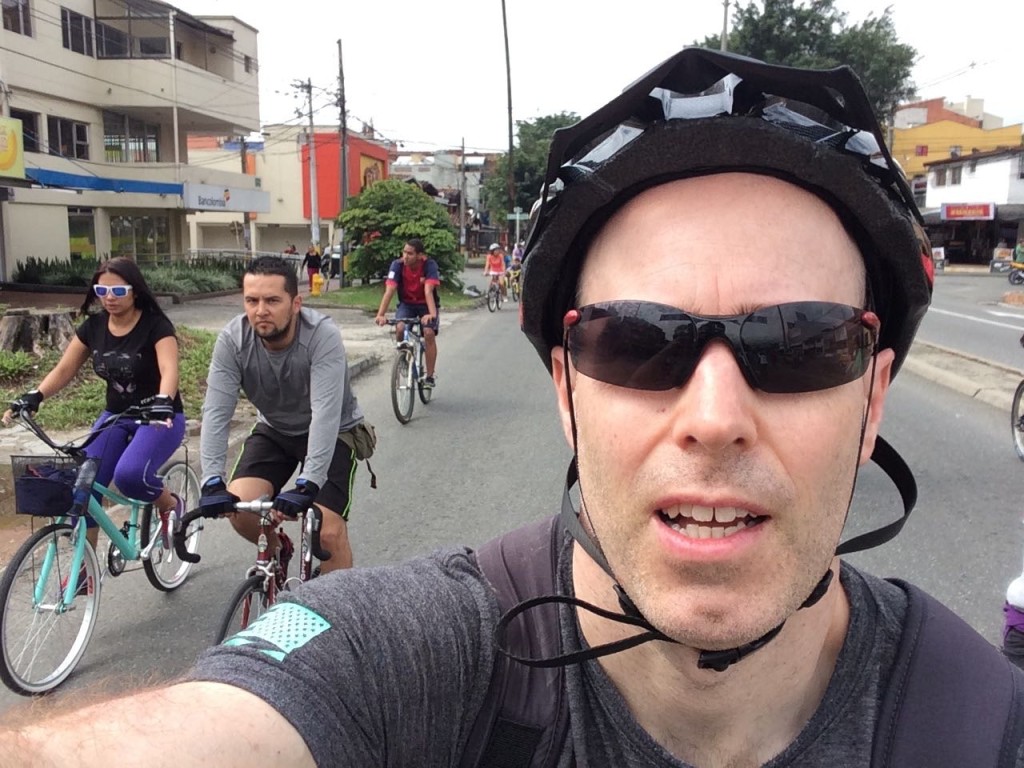