I think Colombia has a counterfeit money problem. The reason I think this is because every time I buy bananas down at the local grocery store the employees examine each bill as though I were a high-profile international criminal involved in ransoming hostages.

Every cash register has two employees. When I hand the cashier a bill she examines it carefully, holding it up to the light and rubbing it suspiciously between her fingers. Then she hands it to the second employee and together they point out the appearance of certain security features, such as a watermark or the absence of “Get 10% off your next Vistaprint order” printed on the back. Finally, once they are in agreement that the bill looks kosher, the cashier cops one last feel before putting it into the register.

Between this routine, and the fact that the exchange rate means I’m walking around with a half million pesos in my fanny pack, I’m definitely starting to get a feel for what it must be like to be an international criminal mastermind.

[Note to self: check Wikipedia to see if wearing a fanny pack automatically disqualifies one from being an international criminal mastermind.]

Luckily, I don’t have to go to the grocery store that often, because street vendors provide many of the things I need around here. For instance, there’s a woman in front of the tienda across the street who sells delicious grilled chorizo on arepas every night. 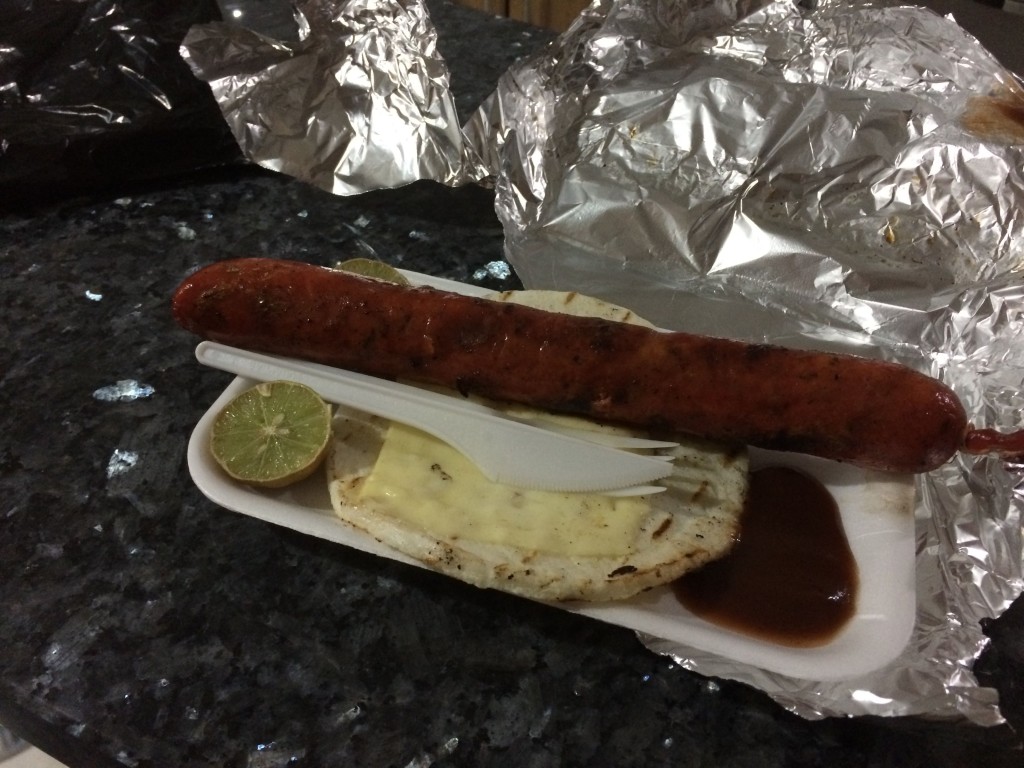 And all of my avocado needs are easily met by the avocado salesman who wanders up and down the street for what appears to be 24 hours a day shouting “Aguacate!” at the top of his lungs. It took me two days to figure out that the shouting at sunrise coming from the street below my 6th-floor condo wasn’t a caffeine-deprived early riser shouting “I got coffee!” over and over again. I really need to work on my Spanish comprehension.

I may or may not actually be on the real 6th floor, because my condo building inexplicably has a -1st floor. Apparently “P” or “B” wasn’t good enough for the parking garage; someone had to go and get all funky with algebra. I’m told that there’s a barbecue area up on the roof, but I haven’t yet had a chance to venture up to the 8 – 3/4th floor yet. 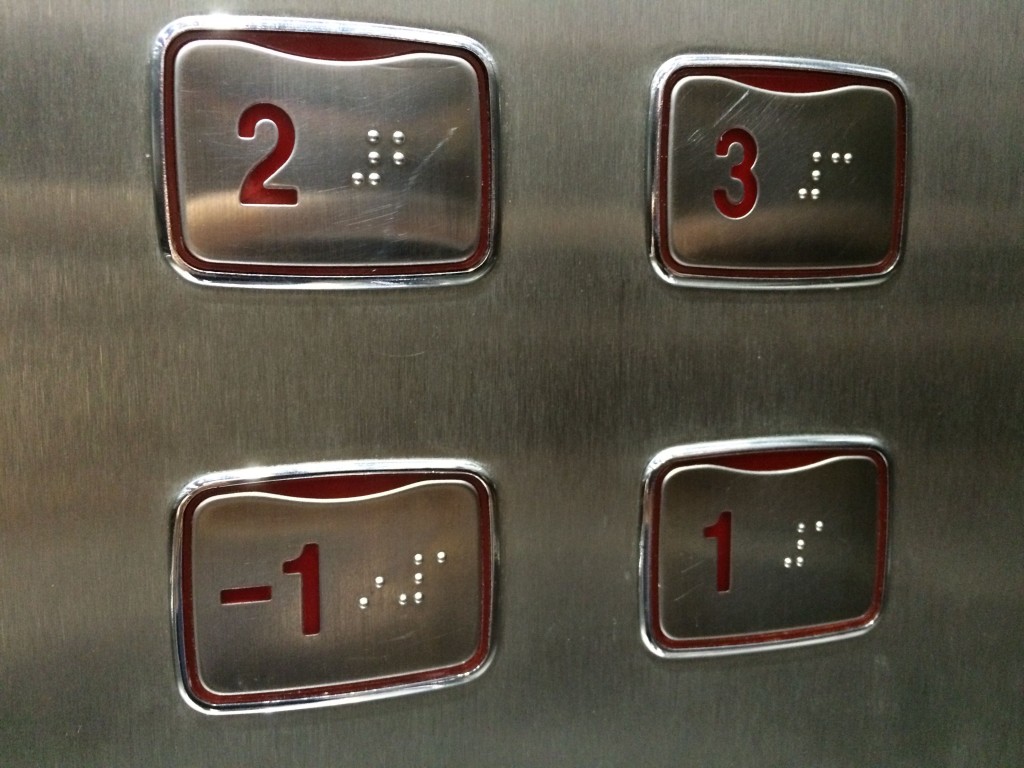 Absolutely the best part of this condo is that it has a garbage chute accessible right outside my door, leading down to (I presume) a dumpster on the -1st floor. There’s nothing that turns me into a gleeful eight-year-old boy faster than listening to the satisfying thunk-thunk-thunk-smack of a trash bag rattling seven stories down the garbage chute. I believe that throwing junk off of buildings satisfies a universal human drive — at least for dudes. I’m 95% sure that’s why the Mayans built the pyramids.

Besides street vendors, the other notable feature of this neighborhood is the highest per-capita collection of beauty salons in the world. There are at least two hair stylists on every block. Either someone’s figured out a loophole in the whole law of supply-and-demand, or there are a lot more two-headed Colombian women than I was lead to believe.

On Friday I walked about a mile from my condo to Cerro El Volador park, an extinct volcanic bulge in the center of the city. It took about 90 minutes to get from my place to the top of the park, but I was rewarded with a gorgeous 360° view of the entire Aburrá Valley and the city of Medellín. I was also rewarded with a reminder that Medellín is at about the same elevation as Denver, and I was panting like a beagle on a treadmill by the time I got to the summit. The top was a peaceful respite from the noises of the big city, as I sat among the trees and watched hawks and buzzards fly past. The only sounds were the occasional cries of parrots whizzing past, and my oxygen-starved heart beating at 290 beats per minute. 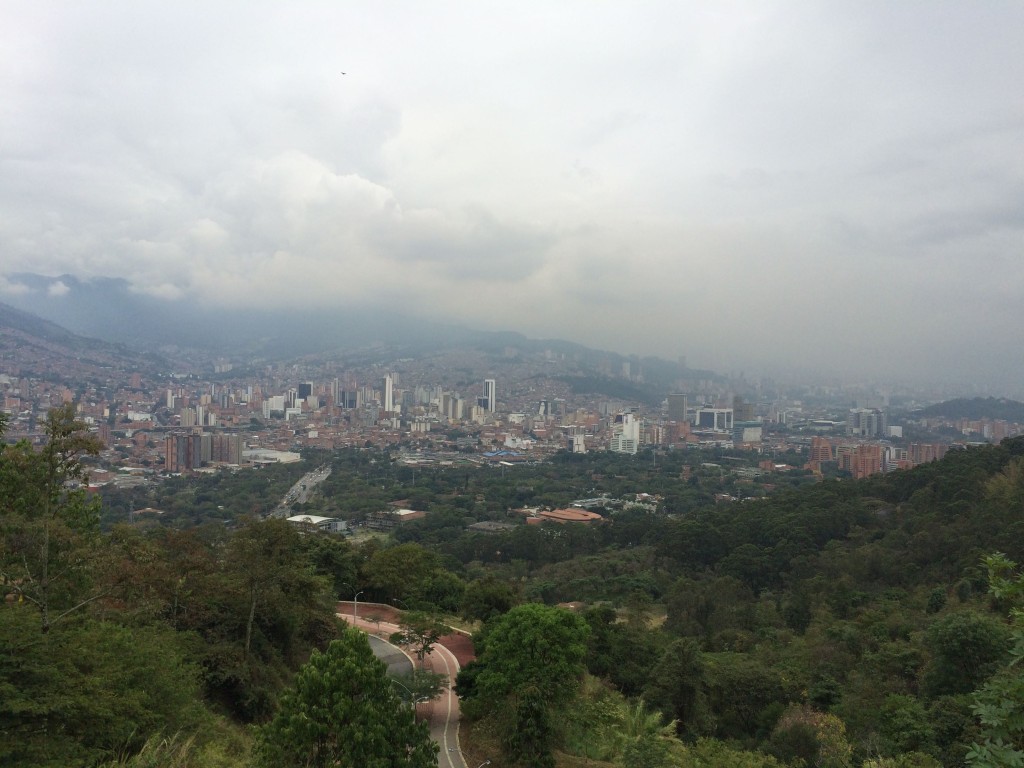 The weather in Medellín is absolutely delightful. It’s known as the City of Eternal Spring, owing to the combination of equatorial proximity and high altitude. Pretty much every day gets up to the mid-70s or low 80s, and at night the temperature stays at a pleasant mid-60s. We’ve had a mix of clouds and sunshine, with the occasional powerful afternoon thunderstorm. With its unique geography, Medellín somehow manages to be both dry and humid at the same time. Come to think of it, this may explain the preponderance of hair salons.

So far I’ve managed to sunburn myself twice, even under a full cloud cover and wearing sunscreen. At least I hope it was sunscreen – I can’t really read the tube. It’s entirely possible I purchased toothpaste from the farmacia and my scalp is just minty fresh.

As they say in Spanish, aguacate!