There is a hierarchy of people you would like to sit next to on a six-hour airplane flight, ranging from good to terrible. At the positive end of the spectrum – the Platonic ideal of an in-air companion – you might find a mute narcoleptic dwarf. No interactions, no space issues, no unwanted conversations.

At the very opposite end of the spectrum – the winner of Bad Airline Seatmate Bingo™ – would be a 300-pound, gregarious, extroverted dump truck company owner who has also worked as a concrete layer, Canon copier salesman, construction worker and biker bar bouncer.

If it sounds like I know a bit too much about this guy’s resumé, that’s because he did not hesitate to share the nitty-gritty details of his life story with me as we winged our way across the Pacific to Hawaii.

Usually I’m pretty good about sending out “signals” that I’m not interested in a conversation, like putting in noise-canceling headphones, watching a movie on the in-seat entertainment system or dramatically nodding off to sleep. No such luck with Bouncer McCopiersales.

“They couldn’t believe I sold [name of boondoggle Canon copier model] on my first day,” he says with a laugh, sipping his guava juice and not noticing that I have been forced to pause the movie I’m watching in order to indulge him in conversation.

“Ha ha, right?” I say in a tone of voice that I hope will alert the interest of any nearby plainclothes air marshall. I go back to my movie.

This goes on for the duration of the flight. Me, popping in my earbuds and hoping he will take the hint. Him, elbowing me and talking very loudly so I’ll be forced to engage in conversation.

“Negative fifty-seven degrees outside,” he says at one point, reading off the screens on the bulkhead of our section.

“Glad I’m not outside!” I say fake-jauntily, while secretly wishing I were outside.

A few minutes later: Nudge. “Got any plans for Hawaii?”

“Uh, snorkeling,” I say, because “Blogging about you,” seems overly honest.

Mercifully, the flight lands 40 minutes early, and I zip out of the plane before he can engage me in a long farewell, or sell me a Canon IR 3045.

Hadas and I were flying separately to O’ahu because our frequent flyer rewards were on different airlines, so I had seven hours to kill until her arrival. I picked up the rental car (according to the discount code I found online I work for Unilever – don’t tell my boss) and fought my way through Christmas afternoon traffic to the AirBnB near the tiny town of Waiʻanae on the leeward side of the island. Apparently all the islands here have a “leeward” and “windward” side, but as far as I’ve been able to tell the leeward side is plenty windy, and I imagine that the windward side is overrun with guys named “Lee.” I might need to spend some time on Wikipedia.

Anyway, our AirBnB host (“Shelley”) showed me the amenities of the cottage, pointing out the extra beach towels in the bathroom, demonstrating how to work the remote for the AC unit and giving me the scoop on the beaches within walking distance. Before leaving me with the keys she also casually mentioned that there had been “quite a few” shark attacks this year.

Now I’m not an expert on the hospitality industry, but I think there’s probably some kind of unwritten rule that you should lead with shark attacks when welcoming someone to your property. I mean, the artisanal soaps in the bathroom are lovely, and I appreciate the partially-obstructed ocean view, but if I were renting out beach-adjacent property where said beaches were an all-you-can-bite buffet for sharks, I think I’d probably share that information immediately. Like pretty much when I pulled the car up in front of the cottage she should have come running out the door screaming “THERE HAVE BEEN QUITE A FEW SHARK ATTACKS THIS YEAR!” This is key information. I can probably figure out how to work the TV on my own.

But no, instead she just happened to drop the whole shark thing into conversation the same way I might mention offhand that I was thinking of looking at after-Christmas sweater bargains down at the TJ Maxx.

“Yeah, we’ve known those sharks were out there for years,” she says casually, while showing me which key works the screen door. “Oh, there’s snorkel gear in the closet. Make yourself at home!”

I brought my roller bag inside, deadbolted the front door for safety, and after a brief nap took a trip to the Waiʻanae grocery store where, charmingly, shopping carts are referred to as “wagons,” and somewhat-less-charmingly, Spam® comes in 13 different varieties (Jalapeño and Black Pepper anyone?). After unloading the groceries and checking the shower for sharks, I drove 45 minutes back to the airport to pick up Hadas, whose Delta flight had taken the indirect Portland-Seattle-Wyoming-Uruguay-Qatar-Tatooine-Honolulu route. We were both pretty tired.

After a solid night’s sleep and waking to the traditional Christmas morning sound of tropical birds bleating, we indulged in a breakfast of eggs, lentils and 60 pounds of pineapple (estimated). Then we drove 15 minutes north to the end of the highway, where Ka’ena Point State Park begins, and hiked two and a half miles along a bluff overlooking the ocean, while the waves crashed below, pelagic seabirds screeched overhead and my calves screamed from an ill-advised CrossFit workout two days before. We took a few pictures, which were especially -esque.

Near the westernmost point of the island we passed through a fence that led to a protected seabird nesting area, and sure enough there were albatrosses (“albatri”?) nesting on the ground just feet from the path. An albatross basically looks like a ginormous seagull that would try to steal your lunch money if you met it on the playground. Luckily, I left my cash back at the AirBnB.

At the very end of the path we trudged through deep sand to a rocky shoreline where we saw endangered monk seals splashing in the water and lolling about on the shore. “THERE HAVE BEEN QUITE A FEW SHARK ATTACKS THIS YEAR!” I shouted helpfully. An interpretive sign reminded us not to disturb the seals, so I made a deliberate point of not trying to sell them a copier while they were clearly catching an afternoon nap.

The walk back to the car was hot and tiring, as it was now mid-day and our energy was flagging. Luckily, it appears to be a Hawaiian tradition to carry a stereo and blast music while hiking, so we had a little pick-me-up every time we passed other trekkers. We all greeted one another with a hearty “Merry Christmas!” as the War on Christmas has apparently not made its way to the South Pacific.

On our way back home we picked up some groceries from the store and a bottle of wine-flavored Spam. Hadas almost fainted when she saw the grocery store prices. Three imported portobella mushrooms cost $10. On the other hand, pineapple is 15¢ a pound, so we bought another 290 pounds for breakfast tomorrow. I think it’s all going to even out in the end. 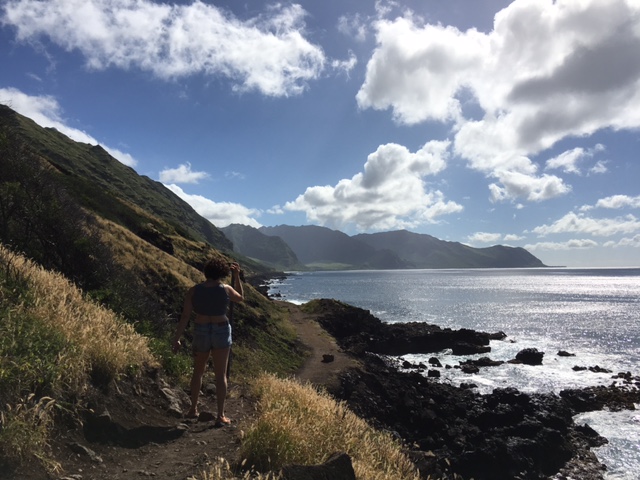 You can read Hadas’s version of the trip at her blog.