Part of the joy of travel is meeting new people from around the world, learning about their interests and their backgrounds, and then figuring out how to ditch them during a hike so you don’t have to tell them to shut up to their face.

But I’m getting ahead of myself.

Yesterday was our final day in Quepos, on the Pacific coast. We got up at sunrise and drove 7 km to Manuel Antonio National Park so we could enter right when it opened at 7 a.m. Manuel Antonio is the most popular park in the country, so we wanted to beat the crowds of pasty Germans wearing safari gear who would descend on tour buses after breakfast. We were on our way into the park by 7:15 a.m., right after Hadas stopped for her 17th cup of coffee of the morning. She hasn’t so much tanned in the Costa Rican sun as bold roasted.

Before entering the park we had the option of hiring a guide for the day, who would carry a powerful spotting scope and help us spy wildlife or assassinate world leaders. We declined, on the theory that by now we were excellent sloth spotters. Which is true, inasmuch as we had already spotted one sloth in the wild, although technically that was only because Hadas bumped her head on it while walking beneath a tree.

The 1.5 km path into the park was lined on either side with sloth-ready trees, but unfortunately there were no sloths that morning; it’s possible they were still waiting to get their coffee. Emerging from the trees at the end of the entry road we discovered an impossibly beautiful cove, lined with a white sand beach and gorgeous jutting rocks out in the sea. Breathtaking. We walked along the sand and soaked in the view, keeping our eyes peeled for the myriad wildlife that was certainly hiding in the trees.

Near the end of the beach, a wild-eyed woman stopped us and asked in VERY LOUD SPANISH if we would mind taking her photo. Of course not, I said – but something was not working with the camera on her phone. Maybe it was because it was an Android phone from 1977. Anyway, she soon lost interest in having her photo taken, and instead proposed that she should join us on our hike.

This seemed like a splendid idea to me, as I couldn’t think of a better way to enhance a romantic early-morning animal-spotting hike than to have a potentially-insane woman tagging along and speaking Spanish at the top of her lungs. OK, actually I can think of infinite better things, but unfortunately I never got to Chapter 34 of Berlitz Spanish for Travelers where they cover “Polite rejections for possibly escaped mental patients,” so I said sure that seems like a splendid idea.

We left the beach and proceeded into the jungle, but Hadas and I dilly-dallied at the first scenic overlook near the trailhead, and when the woman walked ahead on the left fork in the trail we made a beeline for the right fork and successfully ditched her. We are not proud.

The trail was a loop through the jungle, high above the beach and the crashing surf. After a few minutes of hiking we heard crashing in the brush, and up ahead we saw a family of capuchin monkeys playing in the trees. Capuchins are a bit larger than the overcaffeinated squirrel monkeys at our cottage in Quepos, and considerably more chill. In fact, when we stopped in the middle of the trail to watch the monkeys, the monkeys stopped to watch us. They wandered over to branches within eight feet of us, sat down and hung out. One of them flopped down on its belly, letting its arms and legs dangle in a position that recalled a bored teenager on the sofa on a Saturday afternoon. 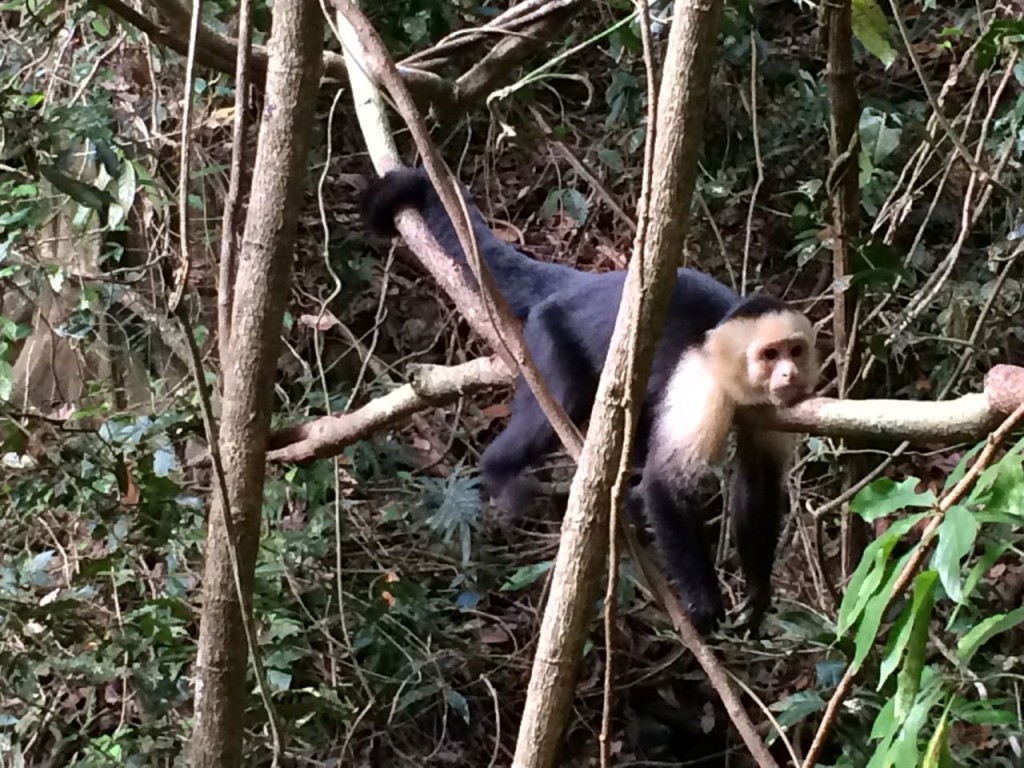 We spent 15 minutes of quality monkey time contemplating the quiet of the jungle, until our VERY LOUD SPANISH SPEAKING FRIEND came around the other direction on the trail and stabbed the monkeys to death with a metal shank she had hidden under her tank top. Not really. Actually, we just continued on our hike and left the monkeys behind.

A few minutes later we climbed up to an overlook and had a spectacular view of the ocean from high up on a cliff. We had a snack and then continued on the trail, where we saw a gray necked wood rail (that’s a bird) and an agouti (that’s a mini-capybara). After emerging from the jungle we finally had our first Costa Rican iguana spotting, although it was a tiny baby iguana that didn’t even seem up to the task of selling car insurance.

It was still before 10 a.m., but it was HOT in the park. Every time we stepped into the sun it was like jumping into a furnace. We were both soaked with sweat and our energy was flagging. We decided we’d seen enough wildlife to call it a day, so we headed back toward the parking lot on the path leading out of the park. We searched the trees for sloths, but alas there were no sloths in any of the trees.

As we got closer to the park entrance we began to see swarms of visitors making their way into the park. Every 10 feet or so, a party of pudgy Germans or pasty French tourists were stopped along the side of the path to look up into the trees at a sloth pointed out by their guide. It turns out that virtually every tree in the park contains a sloth. We just suck at slothspotting.

After the drive home and a nap, we spent a couple hours in the pool. Alas there was no monkey hour on this day, though we were joined by a loud Canadian woman who implored us to never open a Bed and Breakfast. Done and done. Then in late afternoon, as we were sitting out on the deck enjoying the sunset, Hadas noticed a large iguana climbing in the tree directly across from us. She said it was still smaller than what she had been picturing — apparently Hadas believes that iguanas are the size of Godzilla. 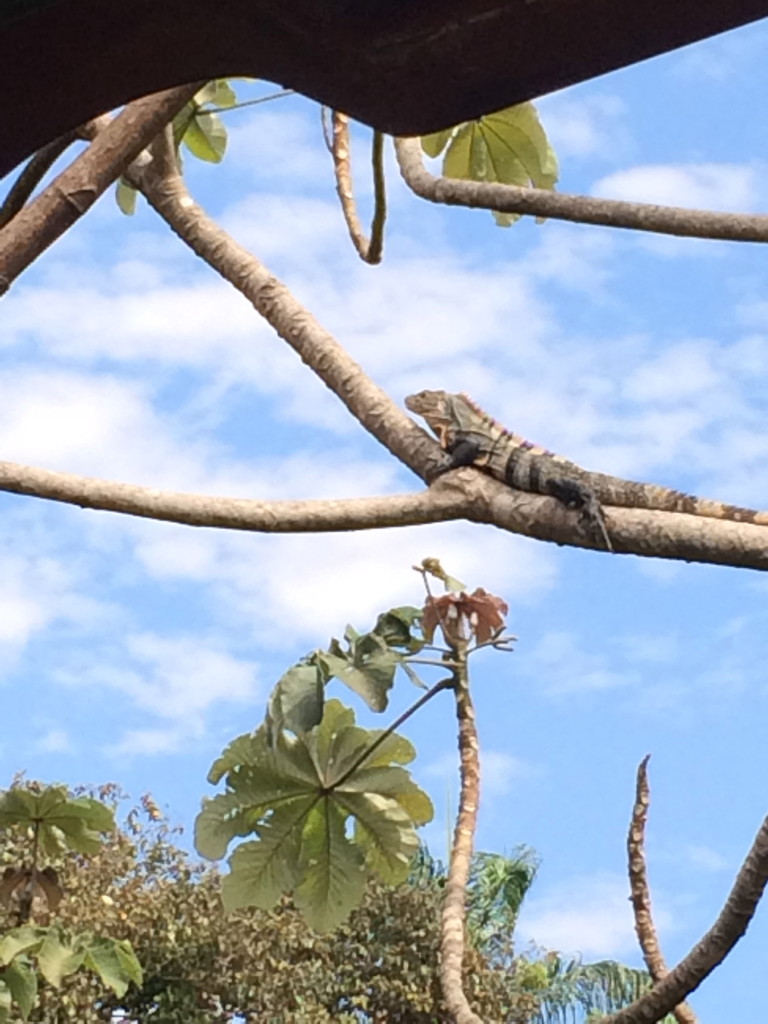 Today, sadly, it was time to leave Quepos and our beautiful view of the ocean. As we had been every day, we were awakened at 5:15 a.m. by the birdsong of Costa Rica’s myriad avian species, by which I mean a rooster. By 8 a.m. we were on the road, and by 8:25 a.m. Hadas had tired of my law-abiding driving, so she took over and proceeded to drive the rest of the way to San Jose at 390 kph.

After only two wrong turns and a brief detour through Ecuador we made it to Heredia, a small town just north of San Jose, where we had planned to take a coffee tour at Britt Coffee. The 11 a.m tour had 30 people and the 2 p.m. tour had 90 people. Sandwiched in between those was our 12:45 p.m. tour which had … us. We got to know our tour guide Maria very well over the ensuing 75 minutes; frankly there’s a lot of pressure being the only two people on a tour. She kept asking if we had any questions, and I felt obligated to come up with something. So I feigned interest in coffee bean hull shucking technology or somesuch. Really, the tour was mainly an excuse for Hadas to sample upwards of 84 cups of coffee. 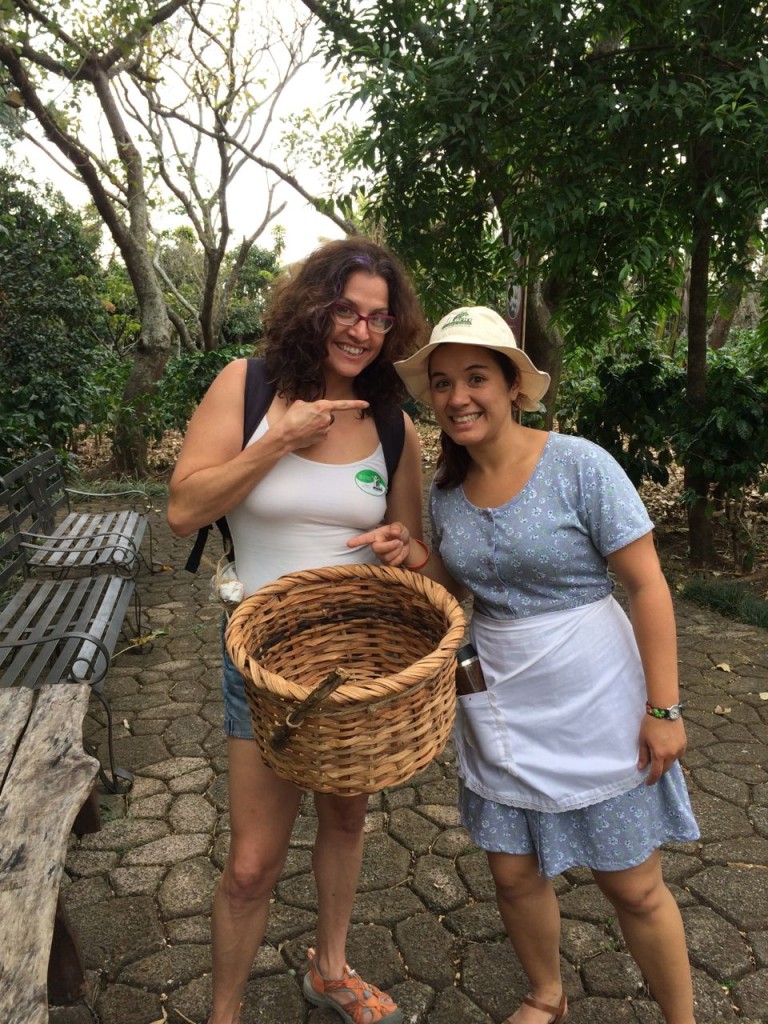 Anyway, we learned how coffee beans are planted, grown, picked, sorted, fermented, hulled, dried, roasted, ground, folgered and packaged. At the end of the tour we learned how to prepare perfect coffee:

After the coffee tour I got us lost on the way to our new B&B. It’s in an upscale neighborhood in the northwest corner of San José, operated by a couple from Canada. So far we’ve met two of the other guests — a man who probably works as a George W. Bush impersonator and an incredibly-annoying woman from Portland who is down here to get dental work. Hopefully she will have her jaw wired shut. 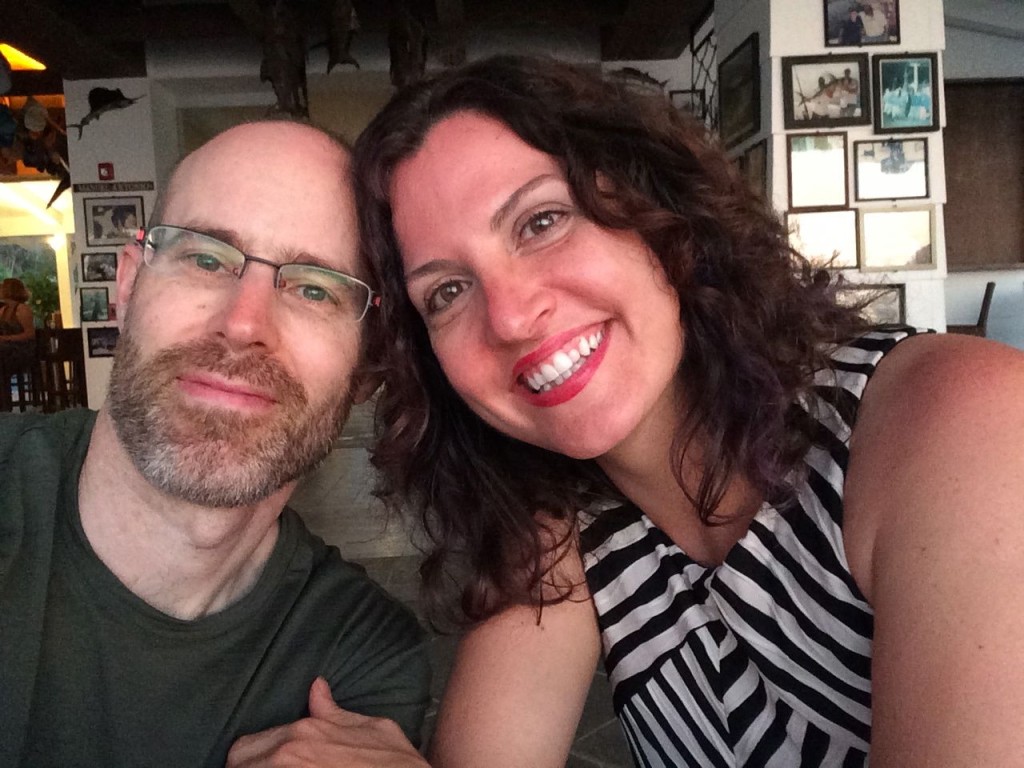 [Note: Hadas and I are writing he-said, she-said blogs about this trip. They should have done this with the Bible. You can read her blog at klutzinmypants.wordpress.com.]

One response to “Costa Rica Days 10-11: Iguana Be Sedated”