Here’s a little quiz for those who have been following my blog. If I were going to visit a monastery high up on a cliffside in the mountains outside Barcelona, which of the following modes of transportation would I choose:

My past few days in Barcelona have involved a lot of seeing of the obligatory sights, most of which fall under the Jeopardy category of “Holy Jesus That’s Big.” A recap:

If I were building a monastery I’d put it somewhere accessible like, say, next to the Costco. Fortunately, I am not in the monastery-building business (and let me point out that monasteryconstruction.com is still available for the enterprising reader) so we have a bunch of 12th-century monks to thank for building a really spectacular monastery at Montserrat, smack dab on the side of a cliff.

To get there you take a one-hour train from Barcelona, which deposits you at the base of the cliff and in the station for the aforementioned aerial tram. It’s a 10-sided yellow metal box on a cable that runs nearly vertically 3,000 feet up the side of a mountain. I would describe the five-minute ride as “harrowing,” especially at the point where the tram scrapes the foliage on an outcropping 2/3 of the way up the cliff. 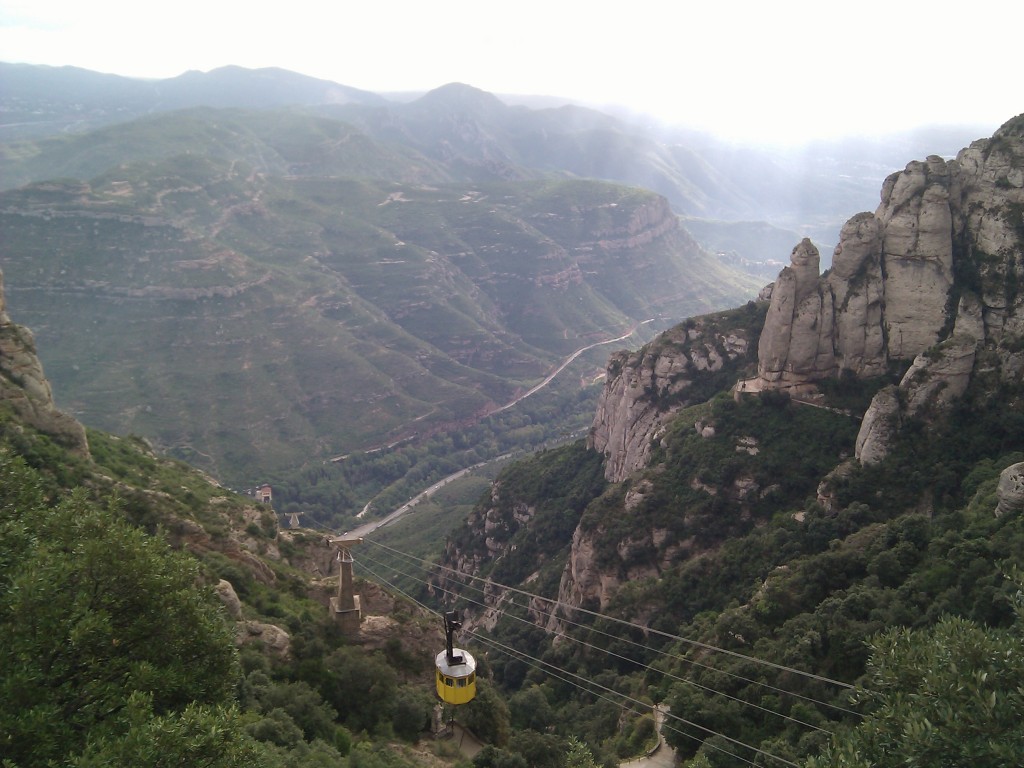 Once you reach the top, the monastery is pretty spectacular, as is the view. Numerous trails lead off into the mountains for hikes to smaller chapels; I hiked up to a cross overlooking the monastery, and was inexplicably greeted by a friendly kitty cat that was hanging out up there, as well as a grandmother from Norway who asked me in broken English whether I was a student (no, but thanks) and then spent the rest of her time saying “Poosy poosy poosy,” which is either Norwegian for “Nice kitty” or she was coming on to me. 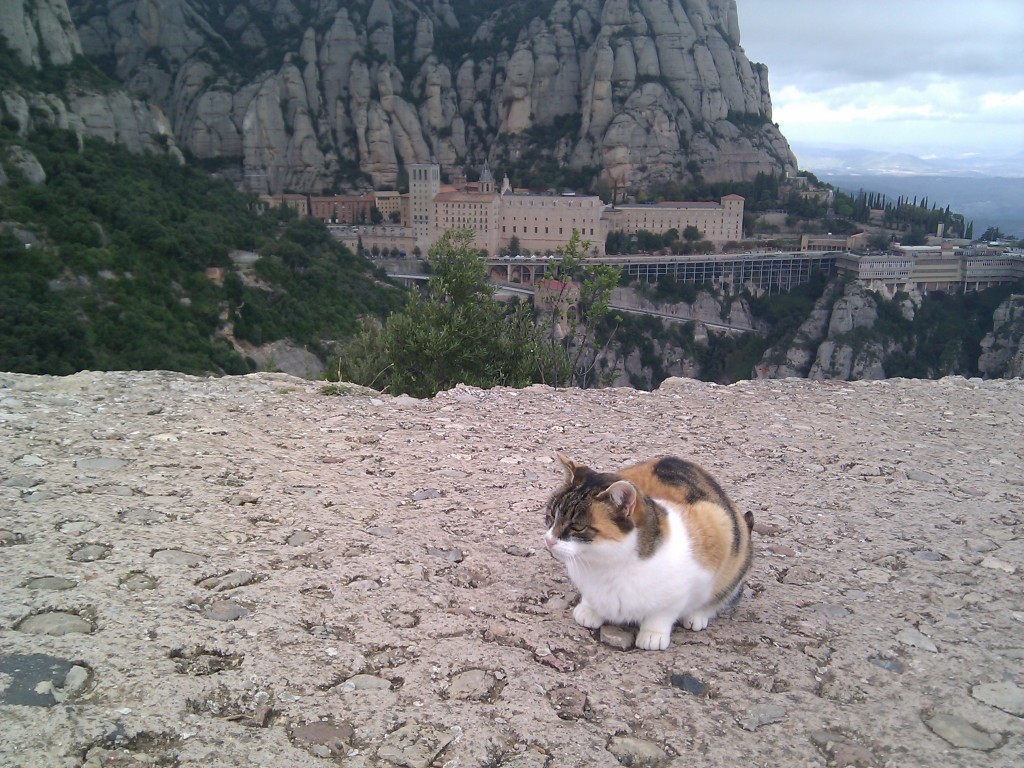 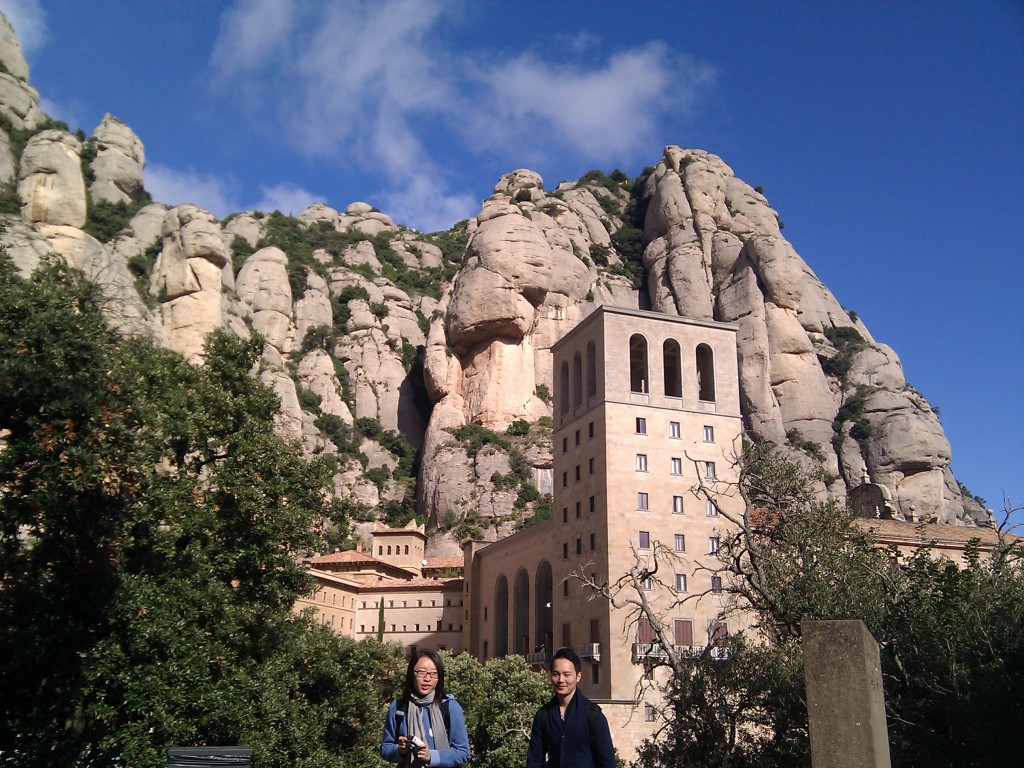 I met up with my improv friend Noah and his friend Rachel to visit Spain’s #1 Tourist Destination™, La Sagrada Familia. In an attempt to beat the tourist rush, we booked tickets online for the 9 a.m. entry, which in Barcelona time is like booking for 4 a.m. This is not a morning city. Rachel is an improviser from New York (and formerly Boston) and we exchanged the requisite list of improv friends in common. After waiting in line for a few minutes, and then being moved to another line because we were apparently in the wrong line, we got to enter the cathedral. If you’re going to visit one of the most spectacular Catholic churches in the world, doing so in a coterie of Jewish improvisers is not a bad way to do it.

La Sagrada Familia (official name: “Basílica i Temple Expiatori de la Sagrada Família y Cerveceria”) was Antoni Gaudí’s crowning achievement, notwithstanding the fact that it wasn’t even remotely close to being finished in his lifetime. Construction started in 1882, and is scheduled to be complete sometime around 2030 (my tip: bet the over). To put that into perspective, they built an entire subdivision behind my house in two months, although it did not contain any stone-carved gargoyles. The ubiquitous construction cranes towering over Sagrada Familia mar what is otherwise a spectacular sight. 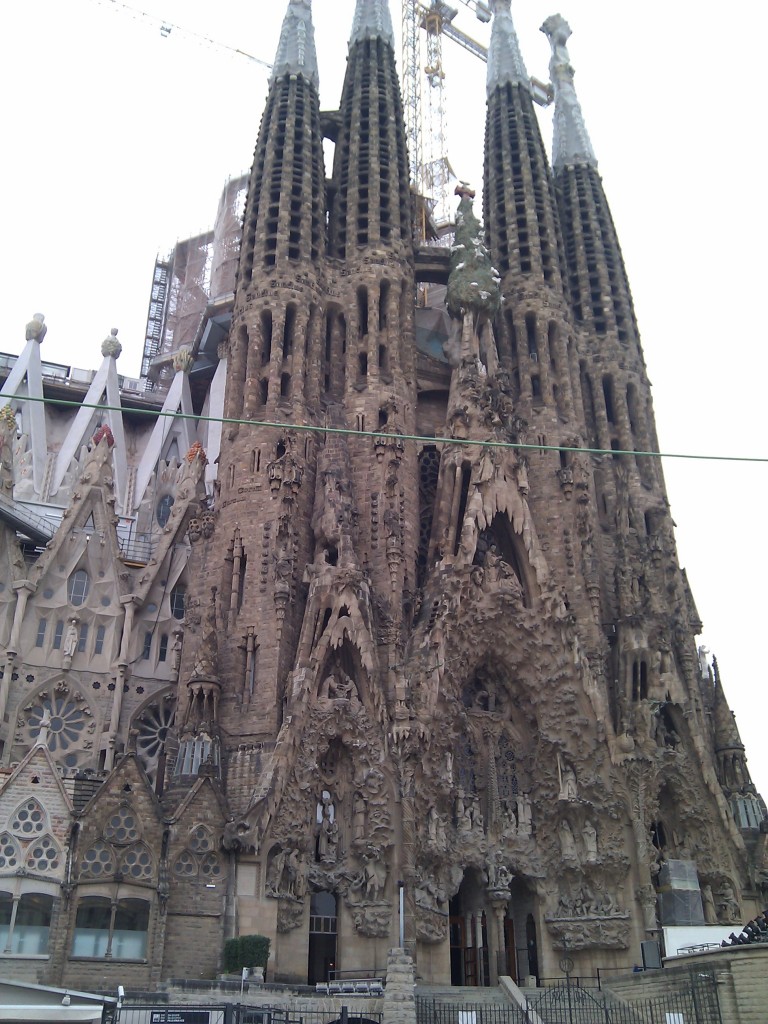 Photos don’t really do Sagrada Familia justice. First of all, it is enormous. The church takes up an entire city block, and from various viewpoints in Barcelona you can see its scale rising up in the center of the city. It is spectacular on the outside, and equally amazing on the inside. 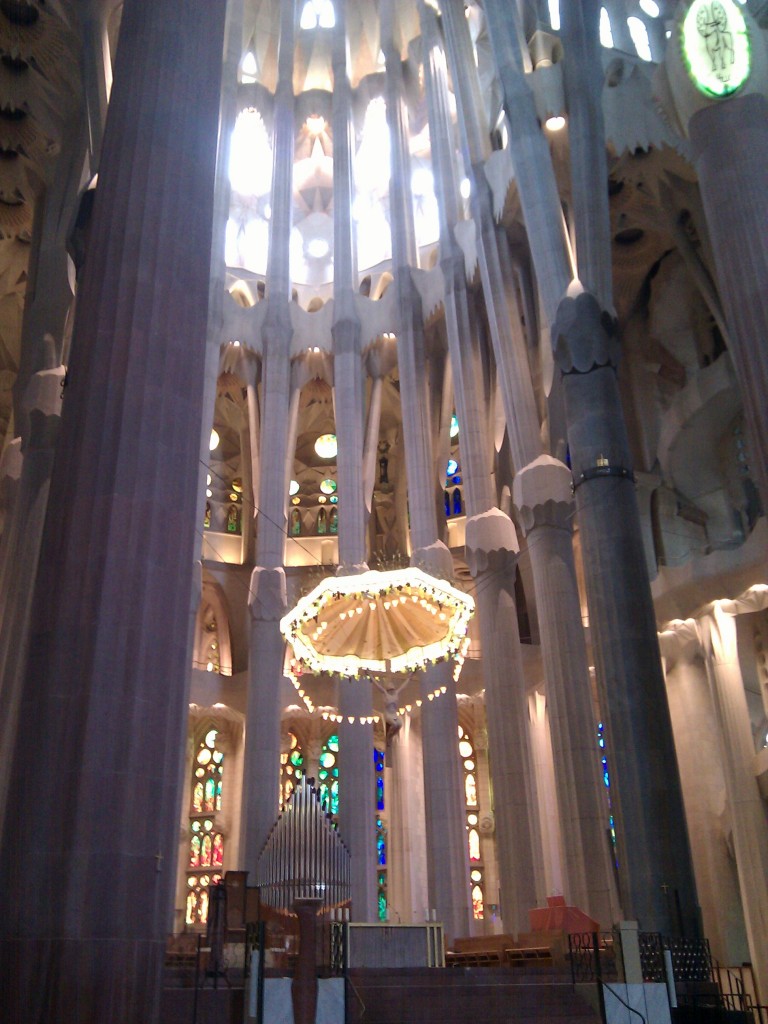 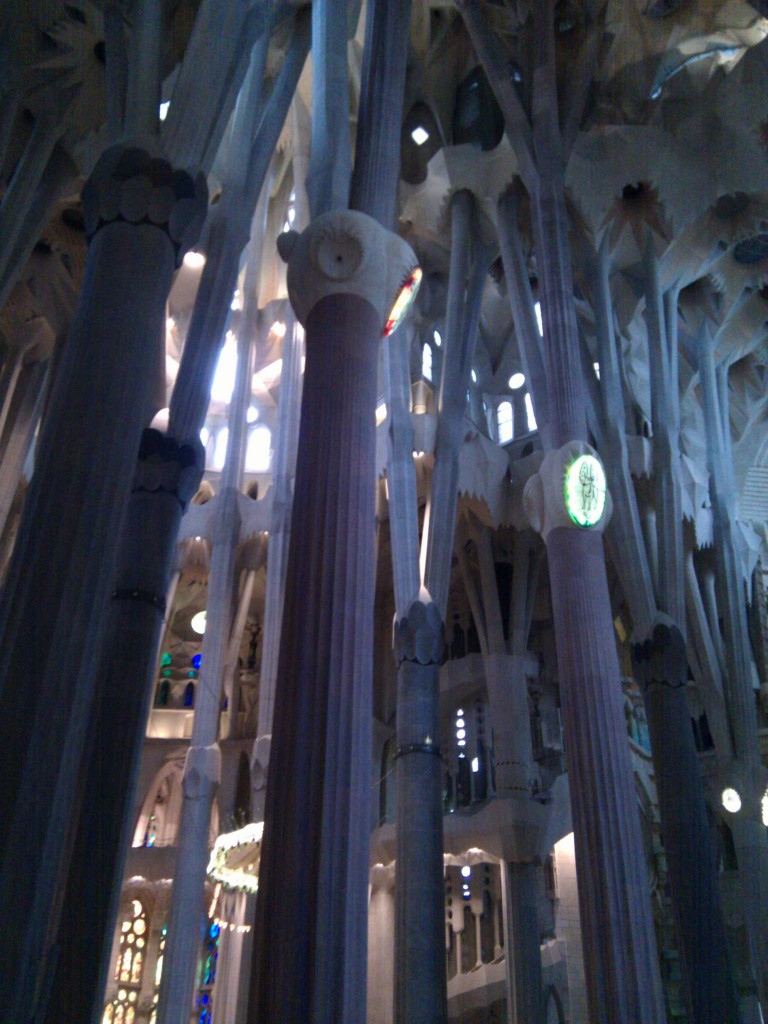 If Park Güell was Dr. Seuss, Sagrada Familia is Wizard of Oz meets Star Wars. Walking around the inside and outside of the church it’s impossible to believe that this was designed in the 19th century. It is at the same time impossibly modern and undeniably ancient. If there was ever a case to be made for time machines, Gaudí has my vote.

After 10 days in my AirBnB apartment I had to move because there were new guests coming in, so I arranged for another place about 3/4 of a mile from my old place. I packed up my stuff, cleaned the apartment and walked to the new place. It’s much bigger, but oddly less comfortable. I preferred the coziness of the old place. When I got here I discovered that the Internet was barely functional, the stove wouldn’t work, there was no hot water and there were these incredibly disturbing photos on the wall in the dark upstairs hallway: 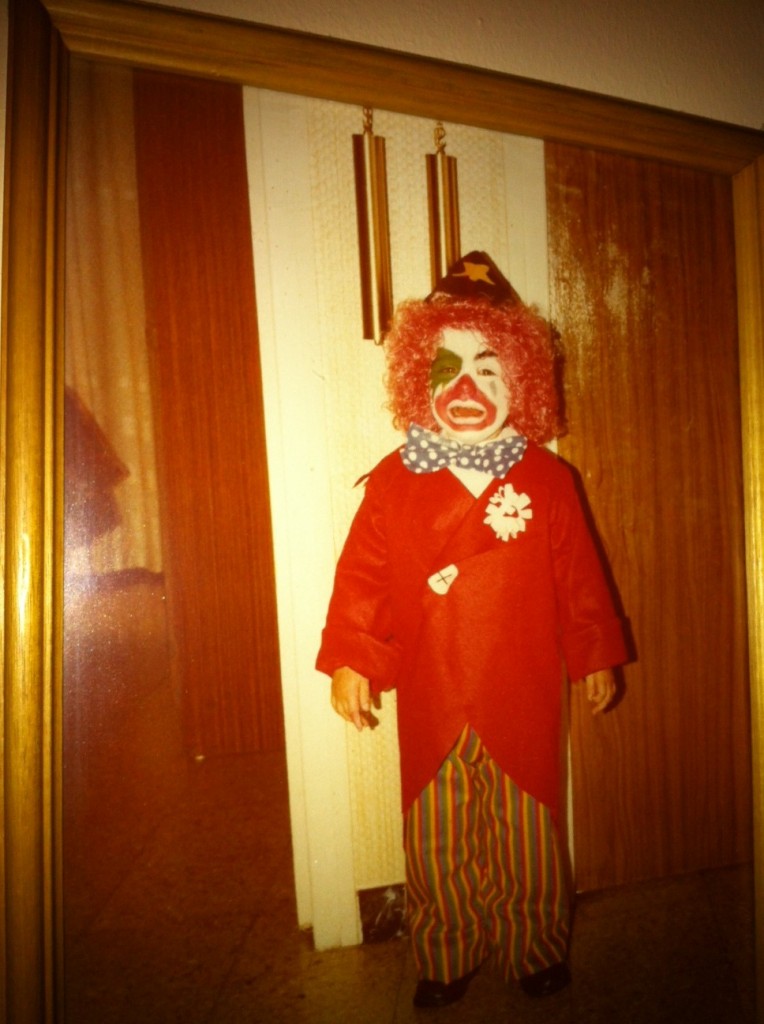 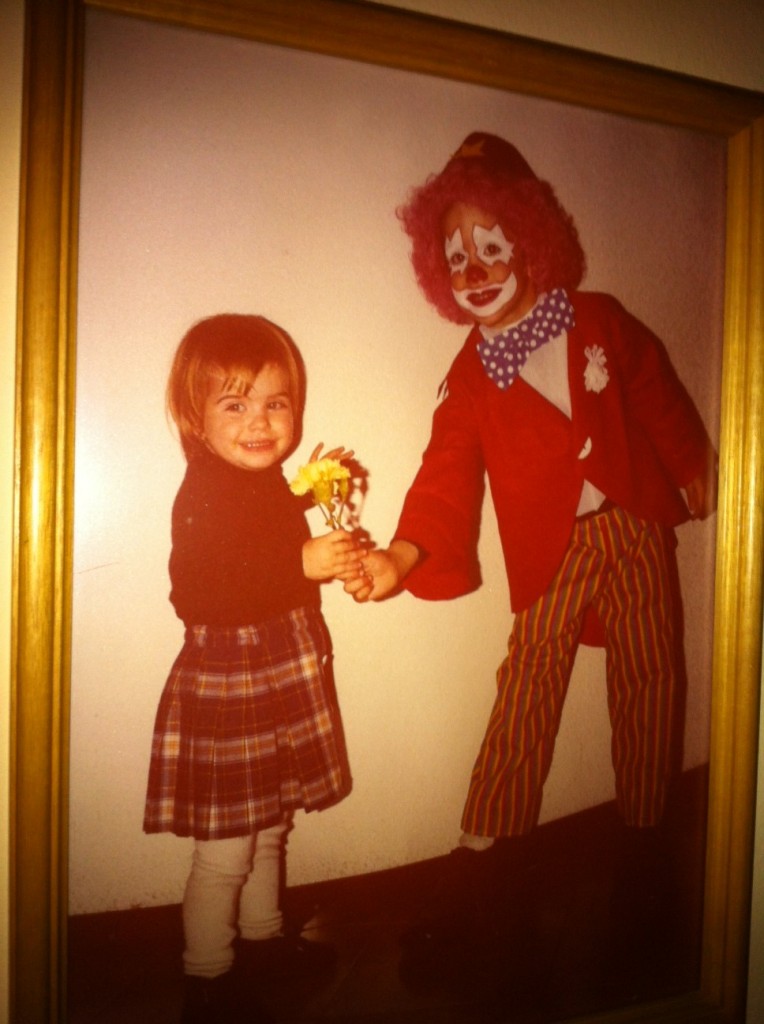 By the next day the rental agent had come by and fixed all the problems, except that the stove is still balky and the photos are still on the wall. At least the internet works now. I’ve come to discover that the main thing I look for in lodging is “solid internet.” I could even live in a cliffside monastery as long as it had a fiber optic connection.

Friday night I went to the finals of the Barcelona Comedy Festival’s stand-up competition. Five of my friends from the Barcelona Improv Group were finalists, so I figured I’d lend my support. Honestly, I had fairly low expectations because back home the amateur comedy competitions I’ve seen have been painfully unfunny, so I was pleasantly surprised when every single person knocked it out of the park. The winner was the only native Catalán, who had a hilarious and self-deprecating routine about not wanting to end up on YouTube and a dream about Lady Gaga and Justin Bieber. His stage persona could be described as “I can’t believe you’re watching me do this” and was utterly charming and delightful. I also won 5€ because we started a betting pool before the judging and I successfully predicted the winner.

One of the things you probably don’t think about until you travel internationally is that most people from other countries have never heard of Portland, Oregon, and have no idea where it is.

I find it endlessly charming to get into conversations where I have to explain where Portland is and what it’s like. It makes you reconsider a little bit your place on this vast globe.

I slept in on Saturday after a typical late Friday night in Barcelona, then took the train to Castelldefels, a small town about 30 minutes outside Barcelona, to pick up my packet for Sunday’s 10K race. (Language fun fact: The word for race bib in Spanish is “dorsal,” so every time I go to packet pickup I feel like I’m collecting a shark.)

After returning home I went out to see the Magic Fountain, which is a Barcelona landmark. This giant fountain sits in a plaza beneath the art museum, at the head of a long corridor of fountains that leads to Plaça Espanya. During the day the fountain is dormant, but on weekend nights there’s a spectacular water, light and music show. It’s one of the top tourist attractions, which explains why every tourist in Spain was there to watch. The fountain has a bit of a Las Vegas feel to it, but of course with the Spanish touch of being accompanied by Disney music, Spanish love songs and a hint of opera. It really is beautiful, and the view down the corridor, with the backlit art museum towering over the scene, is transcendent. 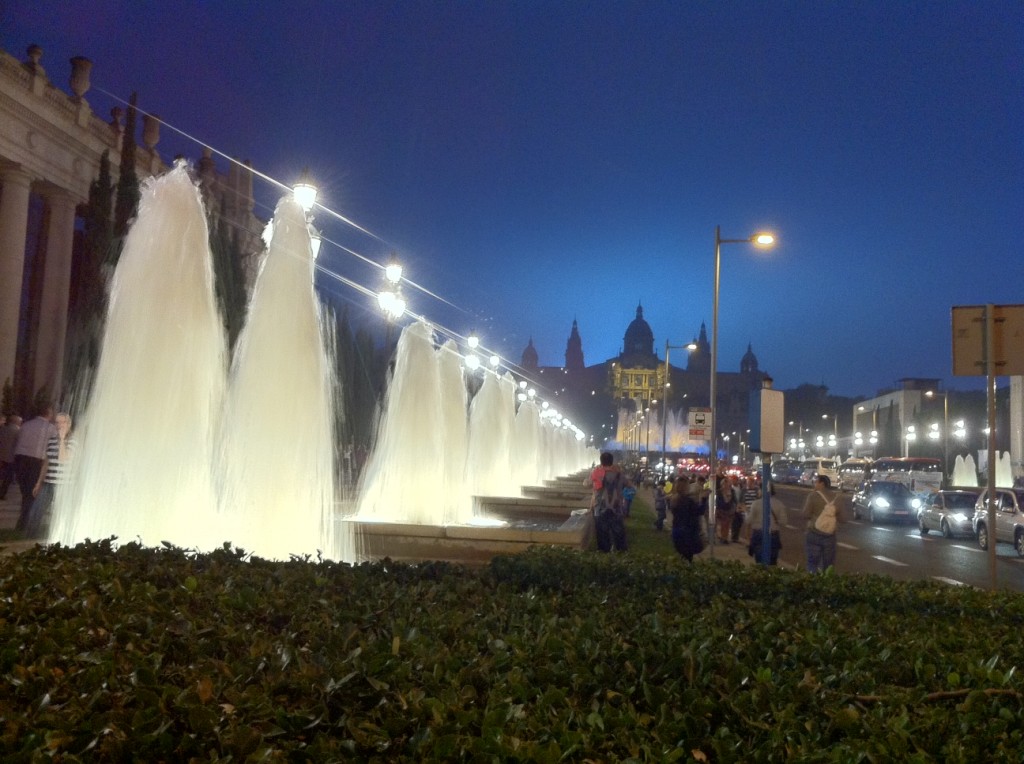 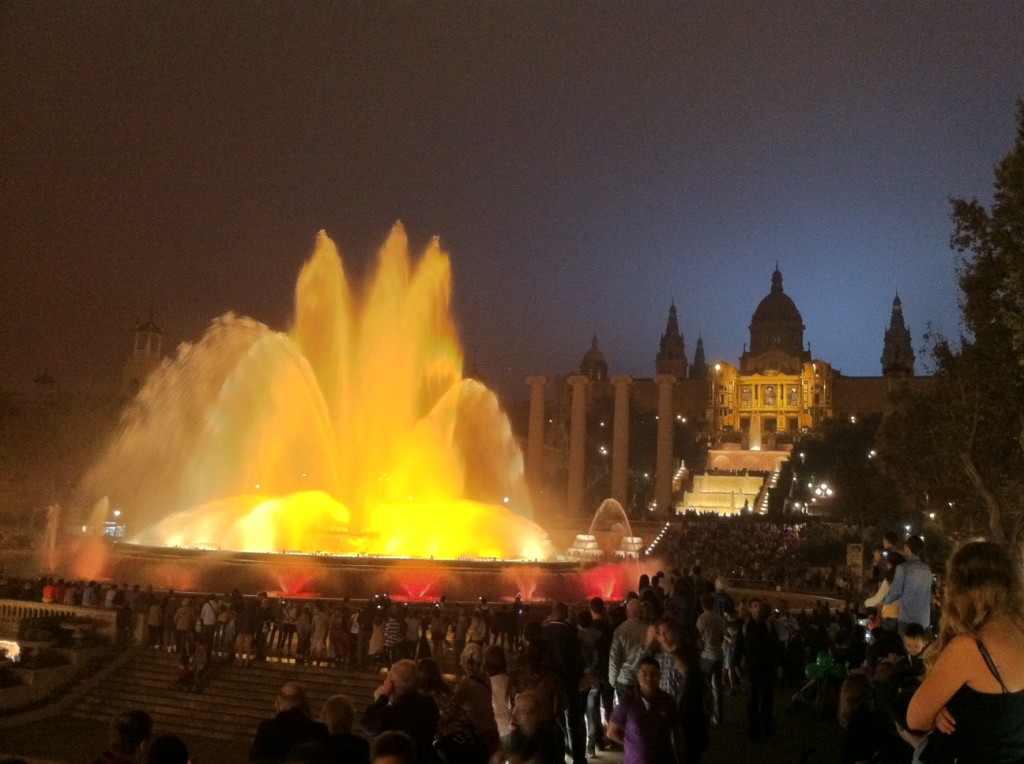 After the fountain I took the metro to the Palau de la Música Catalana, a landmark theater that was built in 1905 and which is considered one of the most beautiful music halls in the world. I can report that it is every bit as beautiful as advertised, but a number of the seats do not, technically, have a view of the portion of the theater known as the “stage,” so it was a bit difficult to watch the flamenco show I was seeing. Also, it turns out that I am not as big a flamenco fan as I would lead myself to believe. One flamenco dance = cool. An entire evening of flamenco = flamtiguing. I snuck out early to get some sleep. 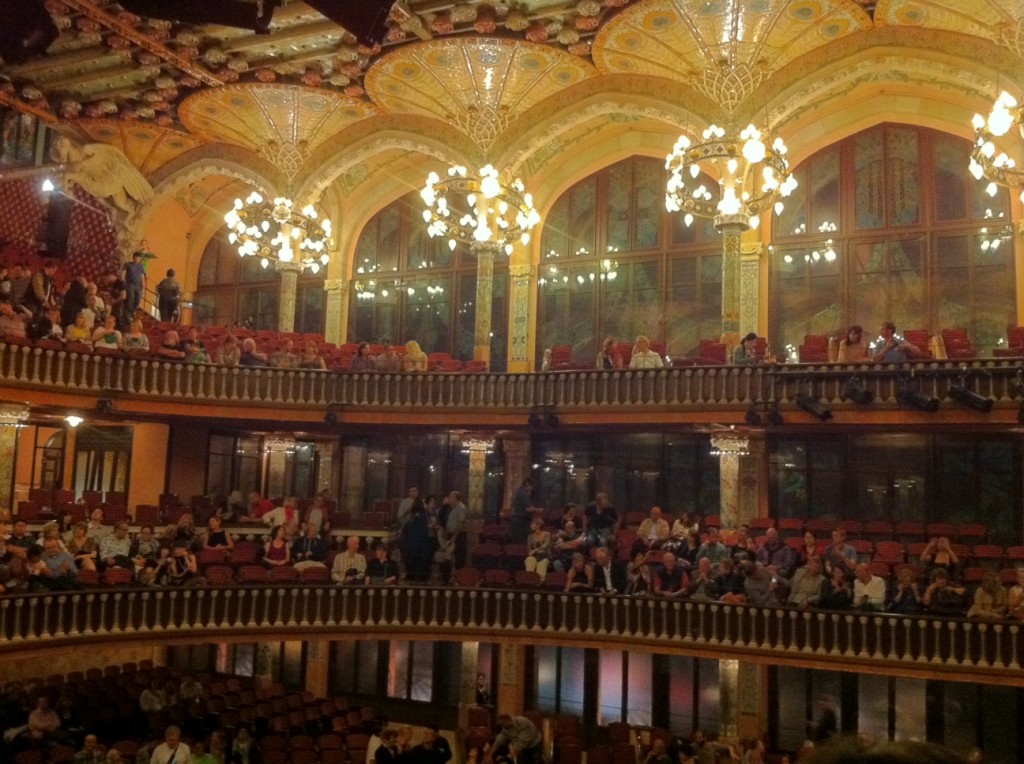 After a 6 a.m. alarm, I caught the metro to the train station and the train to Castelldefels to run the 10K portion of the Marató del Mediterrani. It was over a mile to walk from the train station to the starting line at the old Olympic rowing facility, and my feet were already tired from having done so much walking the last few days. I got there an hour early, so I sat and rested my feet and tried to decide how much of my clothing I should check at the guardaroba and how much I should keep with me in case it decided to monsoon. I opted for “no monsoon,” which turned out to be the right call except that I should have kept my sunglasses because the clouds lifted halfway through the race and it was bright running along the beach.

I was a little concerned that there seemed to be an amazing lack of port-o-potties for the number of participants, but apparently in Spain it is customary (for dudes at least) to haul off and pee in (or near) the bushes anywhere near the starting line, which is pretty efficient when you come right down to it.

The race itself was easy and pleasant. I didn’t really push it and finished within 14 seconds of last week’s time in the Correbarri. Afterward I made the mile-plus walk back to the train station and had an easy trip home. Between four different trains I had to wait a grand total of five minutes; the public transportation here is ridiculously efficient except when they’re on strike.

After a long nap, I went out to teach a couple classes for the Barcelona Improv Group. The first was for their main performance team, and the second was their weekly open drop-in class. The latter was attended by about 25 people, with skill levels ranging from “Hey it’s my first class ever!” to very experienced. It was tons of fun, especially having to explain to non-Americans what scene suggestions like “rodeo” mean. After the class we ran through the rain to a bar, where Ella from Australia played the ukulele and we made up songs about blankets and cheese. It was just like being at McMenamins back home in Portland, except that the food and drinks were served within our lifetimes.

2 responses to “Jews Looking at Things Built By Catholics”