The View From Row 56

I was surprised by a lot of things in Thailand. For instance I was surprised how easy it was to get by with my rudimentary grasp of the Thai language (and by “grasp” I mean “each of my fingers could count one of the words I know in Thai”). I was also surprised by how little culture shock I experienced. I chalk that up to being an experienced traveler coupled with the friendliness and accommodating nature of the Thai people.

What I didn’t expect was to freeze my butt off.

Monday morning, the clouds that had sat over Chiang Mai for a week miraculously lifted, and for the first time I could see the mountain Doi Suthep looming nearly 4,000 feet above the city. What I didn’t know was that it was a massive cold front from China that had swept the clouds away. 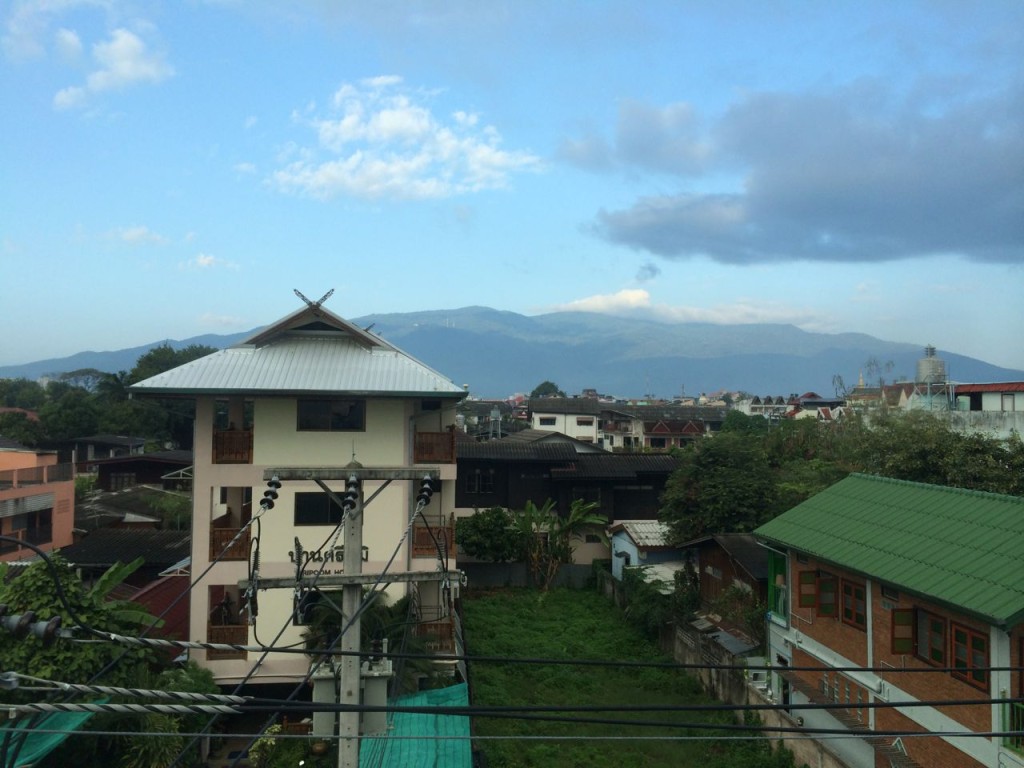 I’d been waiting a week to visit Wat Phra, the spectacular temple near the top of Doi Suthep. Now, with clear weather, I hurried over to the Chang Puak north gate where songtaews were waiting to drive up the mountain. The good news is that it was only 50 baht ($1.50) each way. The bad news is that the songtaews wouldn’t make the drive until they had 10 passengers. So I sat on a bench with a mixture of Japanese and French tourists and waited for more sightseers to arrive. It was the United Nations of Awkward. 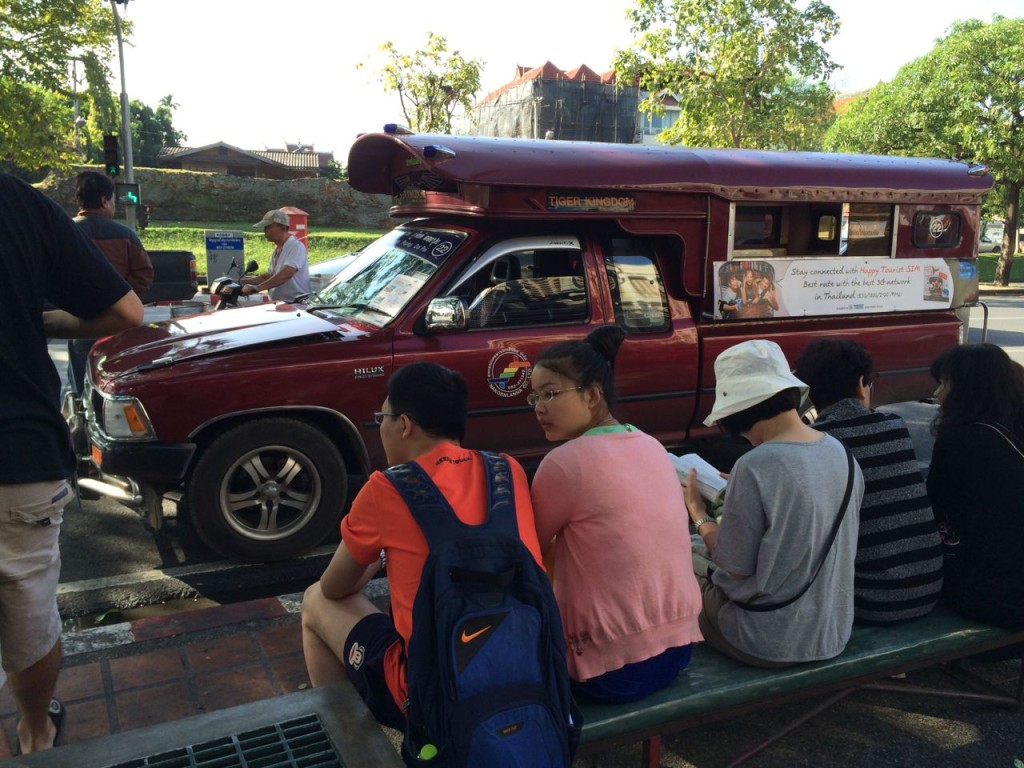 After a few minutes, a slightly befuddled gal from England wandered along and we had our quorum. We all piled into the back of the open-air truck for the 45 minute ride up the mountain. Our driver made it in 30. Possibly because he discounted things like “lanes.” If you’ve never passed a tour bus using the oncoming lane while screaming uphill in a songtaew, you haven’t lived.

Upon reaching the top there was a long staircase to climb to reach the actual temple, and then I somehow managed to miss paying the entry fee required of foreigners when I accidentally wandered in the back way. Security was not TSA-level. 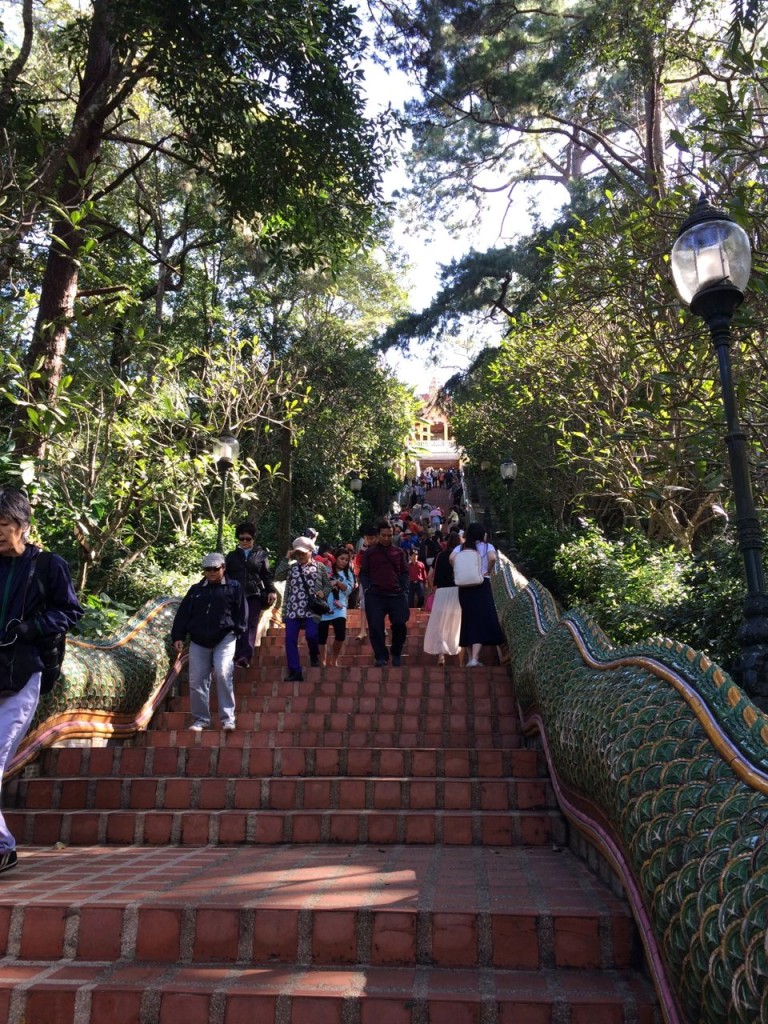 The temple was, as advertised, spectacular, as was the view of Chiang Mai spreading out below the mountain. I have to admit to being a little bit templed out at this point, but I still enjoyed it. Visiting temples in Thailand is a weird vibe, with a mix of Japanese and European tourists snapping photos while stepping over and around Buddhists who are actually there to make offerings or kneel in prayer. Imagine if there were a bunch of Japanese tourists loudly walking among the pews and snapping pictures at your Sunday church services. 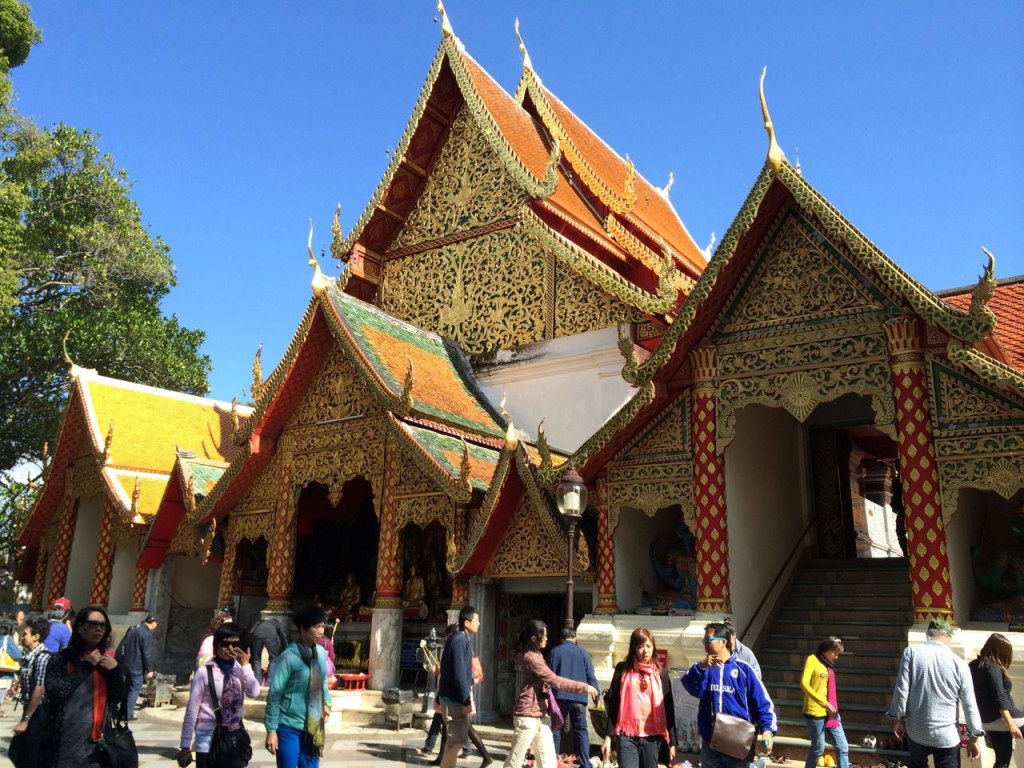 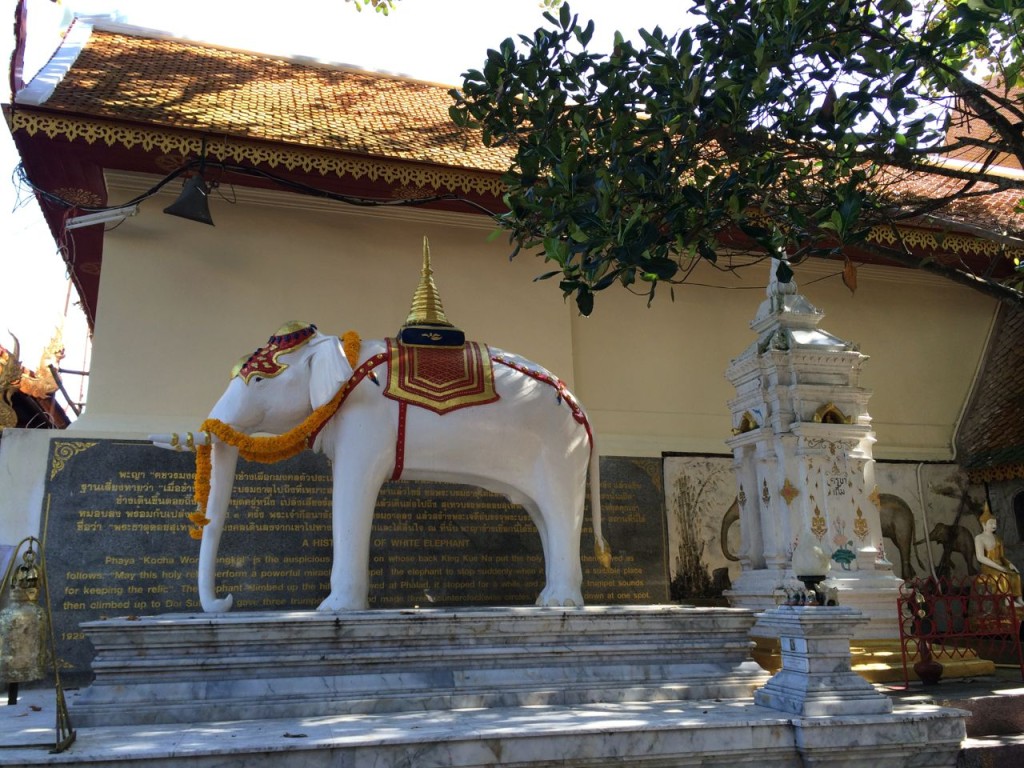 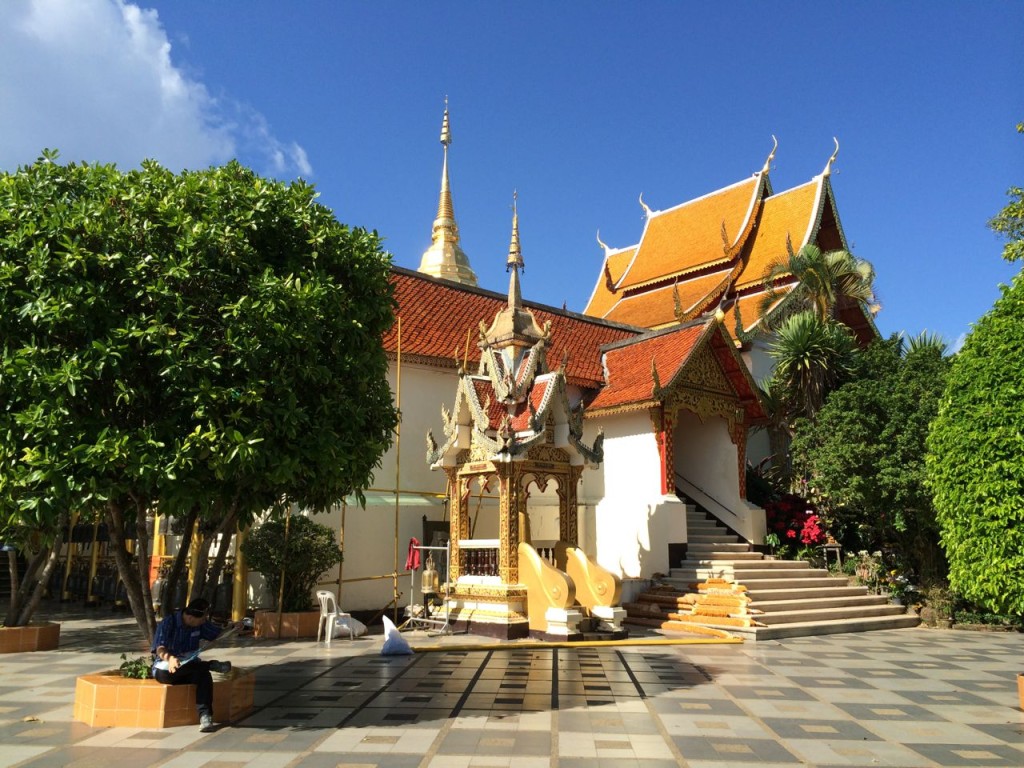 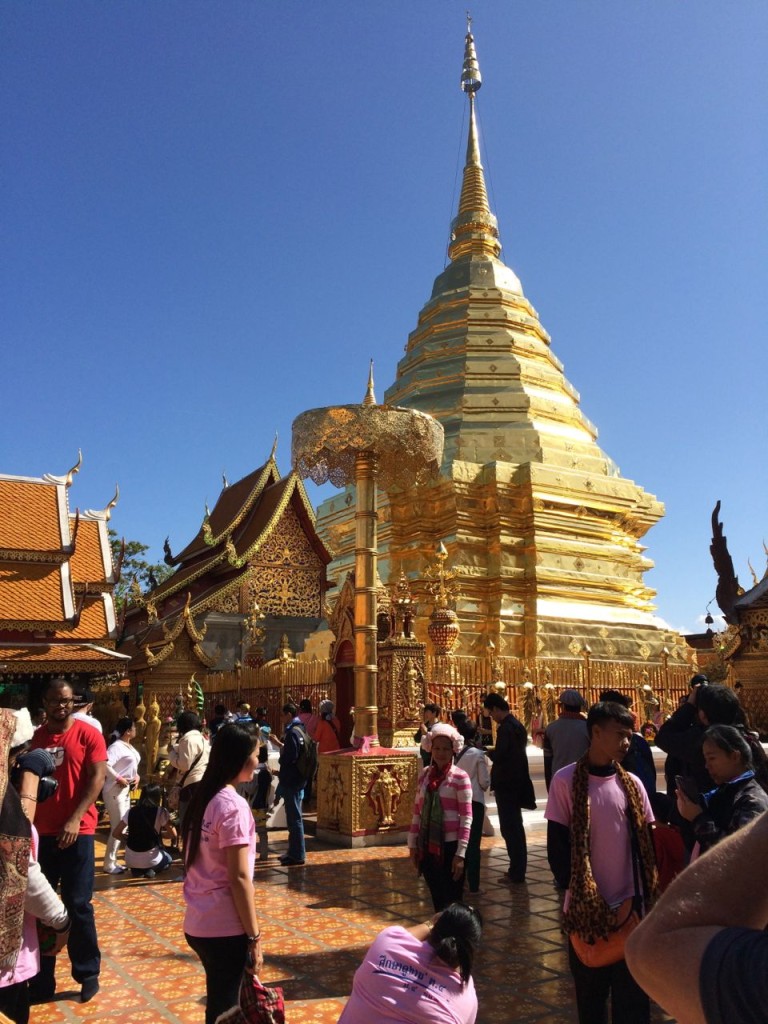 On the way up the mountain, our driver had stopped at a viewpoint so we could “take pictures,” which turned out to be an opportunity to shake us all down for the return fare. “I wait two hours,” he had said, not entirely convincingly. Reluctantly, we all forked over another 50 baht before he would take us the rest of the way to the top.

When I came down the staircase two hours later to look for a ride back home I was somewhat shocked to see the driver standing there waiting for me. He waved and grinned and excitedly rounded all 10 of us up for the ride down the mountain. We made it in four minutes. 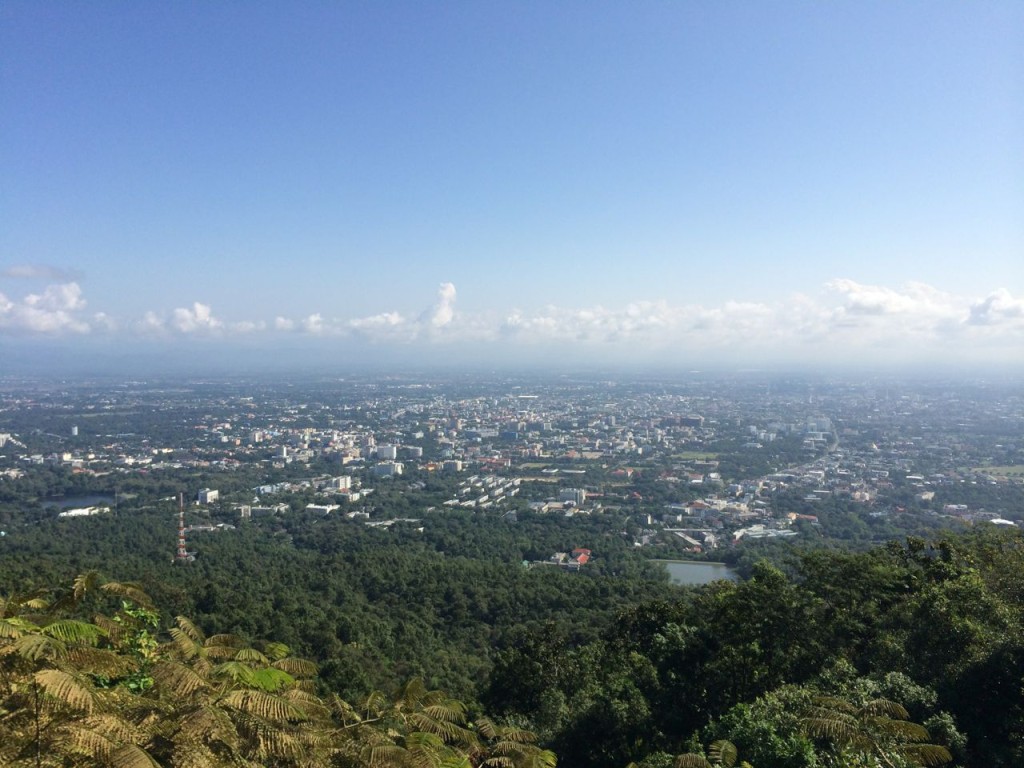 That night the cold front began to settle in, and the temperature dropped to 51 degrees. Those of you who are currently enjoying winter may not think of that as a cold temperature, but buildings in Chiang Mai are not insulated and have no heat. As I sat by the window working on my computer, the curtains were blowing in the wind even though my (very drafty) windows were closed. My fingers started to stiffen.  Eventually I went to bed, fully-clothed, wrapping myself in the lone blanket like a spring roll. It was frigid.

The next morning I looked at the forecast and it was not promising. Lows of 45 degrees every night for the next seven days. The local English-language news website reported that towns nearby had been declared disaster areas due to the cold, and offered tips on how to stay warm by building a rudimentary heater out of a candle and baking dish. I was going to freeze to death if I stayed in Chiang Mai.

So I jumped online, bought a ticket for Bangkok, packed my bag and two hours later headed for the airport. It took me three tries to find a songtaew driver who would accept less than 100 baht for the ride. Two weeks in Southeast Asia and haggling over 61¢ seems like a good idea.

The Chiang Mai airport had free wi-fi and prayer rooms for several flavors of the devout, presumably overrun with Japanese tourists. Domestic security was predictably light. I probably could have smuggled a candle and baking dish in my pants. 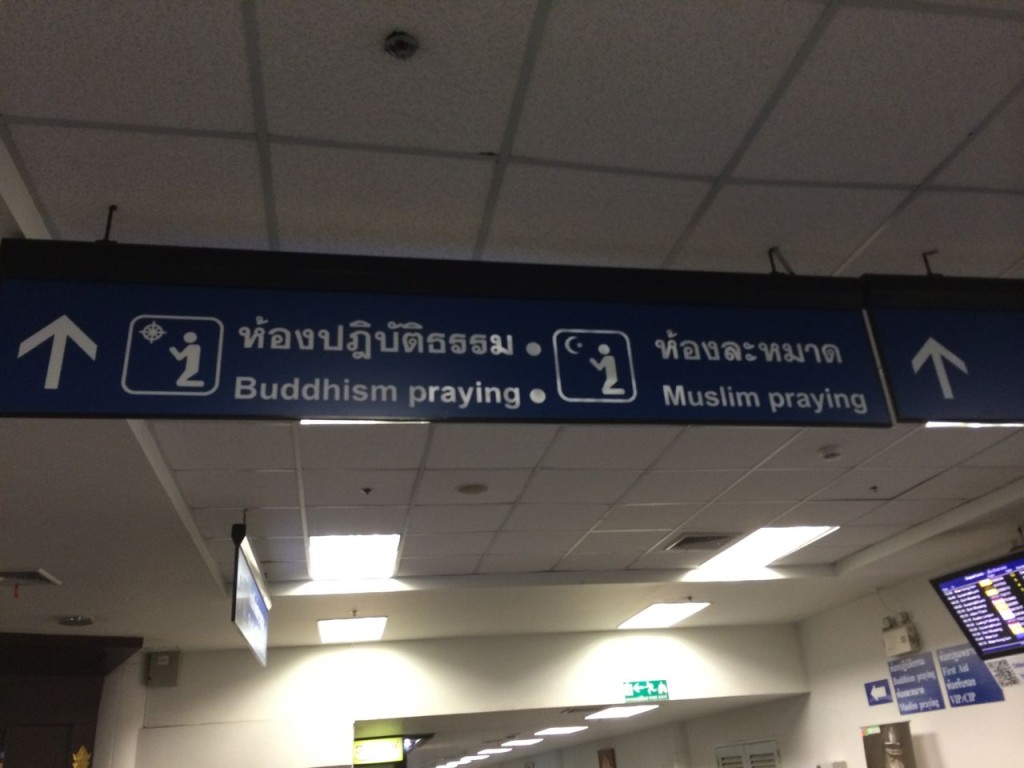 Curiously, my Thai Airways boarding pass said I was in row 56, which seemed like an awfully large plane for such a small route as Chiang Mai – Bangkok. I wondered if the $34 fare meant I was getting towed behind the plane in a lawn chair.

The mystery was solved when I boarded the aircraft; the first row of the plane was row 31. I have no idea where the prior 30 rows of the plane were. Did they make two 737s by just breaking a 747 in half?

Thus settled into my empty row 56 (enjoying a secret identity as row 25), I read a Kindle book through the one-hour flight to Bangkok and occasionally glanced out the window to enjoy glimpses of the Thailand countryside. Once landed at Suvarnabhumi airport (pronounced “Sa-wa-nee-poom” — someone was drunk in transcription class) I caught the ultra-modern Airport Link elevated railway to the Sky Train and then to the comfortable AirBnB that I had reserved in the On Nut area of Bangkok (insert your own joke here). Bangkok is also experiencing unseasonably cold temperatures, which means the mid 60s at night and low 80s during the day. It’s very pleasant. The people here are wearing parkas.

I’ve spent the last couple days exploring the night market near my condo and visiting the Siam Paragon mall, which is the most Instagrammed place in the world. I made a point of not Instagramming it

One last surprise in Thailand: I’m surprised by how much I miss home. Not homesick, so much as road weary. I’ve had an absolutely amazing and wonderful trip here, but tomorrow is my 103rd day of travel for 2013. I’m looking forward to heading home tonight so I can be somewhat recovered from jet lag by Christmas. I’ll be back to Thailand for sure, and I’ve had a great year exploring the world. Thanks for joining me on this journey.

My next trip starts January 6. 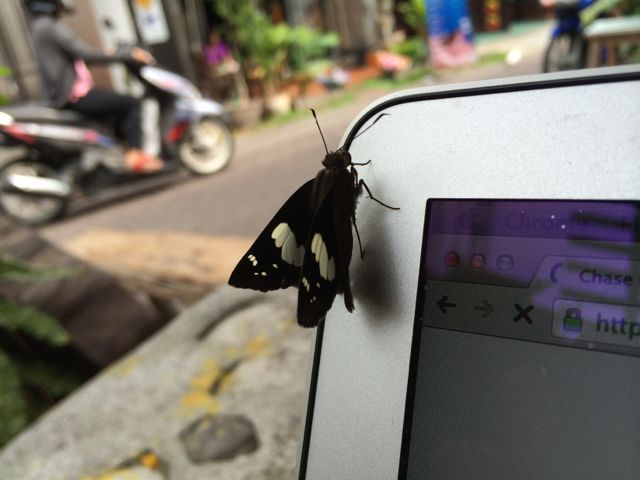 One response to “The View From Row 56”