About four hours into my epic stay in Bangkok’s Don Mueang airport I finally decided to pass through security and find the gate for my flight. While entering the extremely perfunctory security checkpoint a random guy noticed my TeamSnap t-shirt and asked where I’d gotten it. He was very excited to learn that I am one of the founders of TeamSnap. He’s a customer — Jason from Edmonton — who plays on a TeamSnap-organized hockey team. We had a nice conversation.

I was SUPER excited to get recognized for my TeamSnap t-shirt in BANGKOK!

His wife/girlfriend regarded our entire conversation as if we were space aliens. I’m betting that “My dude met the founder of the software used to organize his beer league hockey team” doesn’t make it into the Highlights of Bangkok post on her blog.

It was quite the hike to my gate. Since Don Mueang only services a handful of low-cost airlines, much of the airport appears to be walled off or otherwise closed. It was a good 10 minute walk to the gate area, down two flights of escalators and past much abandonment. After waiting in the airport for close to six hours, I was excited to learn that my flight was delayed another hour. I sat in the waiting area and let the cold Arctic air conditioning waft over me, hoping a tauntaun would happen by that I could filet with any number of objects I might have smuggled through the perfunctory security checkpoint.

I was flying Air Asia, with my ticket having cost all of $39. The signage is perky Japanese-inspired typefaces and bright colors, and their staff appears to have been hired primarily on the basis of sex appeal. Every single flight attendant and gate agent for Air Asia would be Miss (or Mr.) December on the Delta Airlines pin-up calendar.

A lot of Air Asia is really slick. For instance, after checking in online they sent a QR code to my phone. When I got to the airport I was able to scan the QR code at a kiosk and it spit out my boarding pass.

There are also some elements to Air Asia that are a little less successful. For instance, you can pay extra to get priority boarding access, but because we were at a gate that didn’t technically contain an “airplane,” we boarded onto a shuttle bus instead. Every person who had priority boarding access was summarily shoved to the rear of the bus by us non-prioritized boarders, and thus were last in line to actually get onto the airplane.

A secondary issue — and more serious in my book — was that the shuttle bus driver did not appear to have all the required details to execute his job, such as — for instance — the location of the plane. Our shuttle bus drove to one section of the airport. Stopped. Did a u-turn. Drove to a second section of the airport. Stopped. Waited for a minute while (I presume) a heated radio conversation ensued, and finally drove to a third section of the airport where there was a plane parked on the tarmac.  I still haven’t figured out why they didn’t park the plane at the location where the shuttle bus was initially located, but for $39 I’m not complaining. I imagine an interview for the position of Shuttle Bus Driver at Air Asia involves picking a photo of an airplane out of a lineup that includes other vehicles like tractors and sailboats.

On board the plane I perused the (fantastic) English-language in-flight magazine, the only drawback of which was an article about how they recover the cockpit recorder “black box” after airplane crashes. Maybe their editor got lost on his drive to the office.

The stunningly hot flight attendants demonstrated the safety procedures, which I paid rapt attention to because safety first is my motto. In the event of a water landing you can blow into the tube on your life jacket for inflation. I consulted the map in the in-flight magazine to see if we were traveling over any water.

The flight was uneventful, especially because there are no complimentary beverages and I wasn’t going to pay a buck for water on an airplane, like an animal. We landed in Chiang Mai in about an hour and pulled up directly to a walkway leading to the terminal, thus forestalling the possibility of getting lost.

While waiting for a taxi I met two jolly Poles (which is also the title of my Bing Crosby tribute Christmas album), who offered to split the cab fare and along the way one of them shared tales of getting thrown from a motorcycle in Krabi (a town on the coast of Thailand) and suffering a severely sprained ankle. Amidst swapping travel stories I politely suggested that I had always wanted to visit Poland, which may slightly stretch the definition of both “always” and “wanted.”

Chiang Mai’s old city is a square about 1.5 kilometers on a side, surrounded by a moat and remnants of the original wall built in 1296 to keep out (I think) East Germans. The rest of Chiang Mai surrounds the old city radiating out a mile or so in each direction until it meets the countryside. The old city is a maze of twisty roads and alleyways and I can attest that it is solidly possible to get very lost wandering its streets (with or without priority boarding). 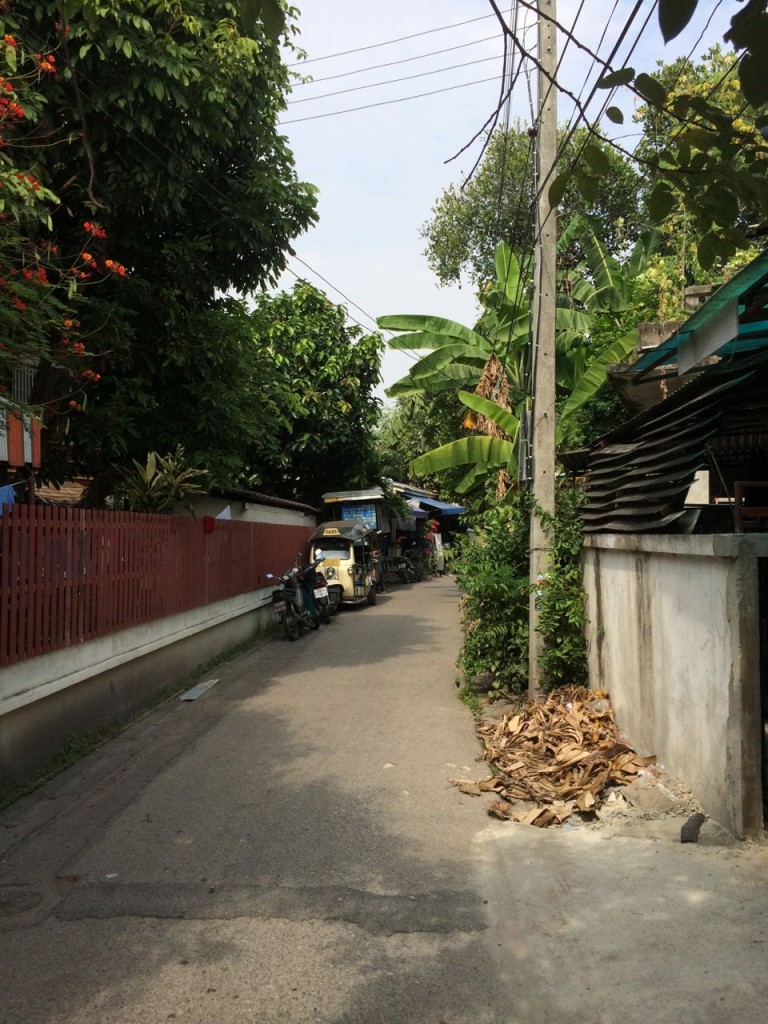 Luckily, being only two square kilometers in total (the city, not me, though at the rate I’m eating I’ve got a shot at it), eventually you come out on one of the edges of the old city and can get your bearings by the swarms of traffic driving the two streets that parallel the moat. My guesthouse is on the third floor of a lovely building on the northeast inner side of the old city. I have a lovely view of Doi Suthep mountain, or at least I will when the clouds lift. 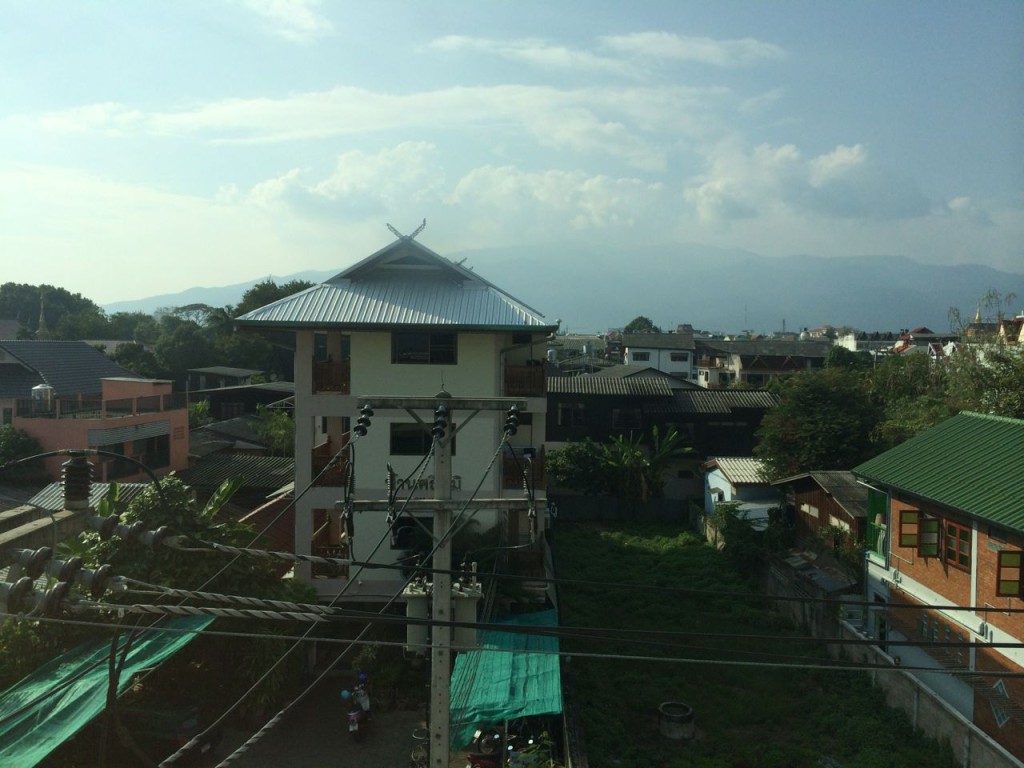 Within a few blocks of the front door are dozens of restaurants, cafes, massage shops and street vendors. About three blocks aways is a small daily market that sells fruits and vegetables and freshly-cooked food.

Yesterday evening I walked about a kilometer up to the north gate of the old city, where there’s a large nightly food market. One of the best-known vendors is a woman in a cowboy hat who cooks up braised pork shank served over rice with a soft-boiled duck egg. Delicious! This is an area that few tourists visit, so none of the food vendors has signs in English. Thus ordering is a bit of a challenge, but a fair amount of pointing seems to get the job done. 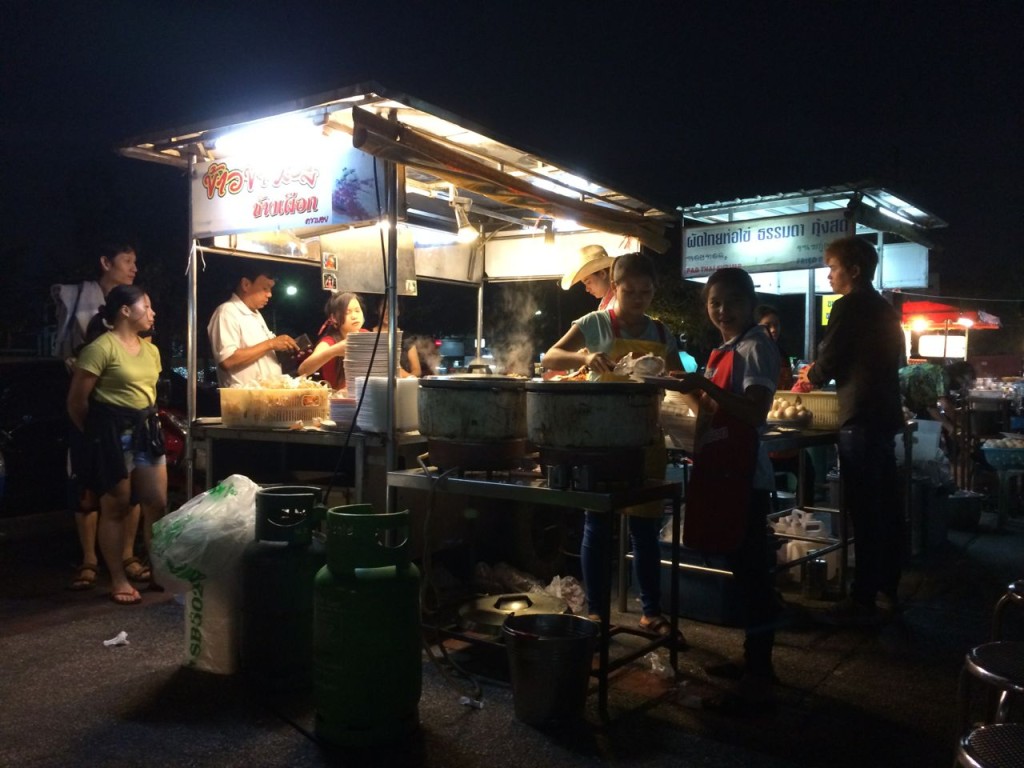 This morning I walked about a mile and a half to the Wararot Market, a large complex of buildings and outdoor stalls near the river, that has food vendors, meat, fish, fruits and vegetables and anything else you could want to buy. I picked up some meat-on-a-stick along the way, and when I got to the market I finished my breakfast with some fried rice and two packets of spicy sausage grilled in banana leaves. After some initial tests I determined that you probably are not supposed to eat the banana leaves. Delicious. One of the stalls had buckets of live turtles, eels and catfish, which did not make it onto my breakfast menu. 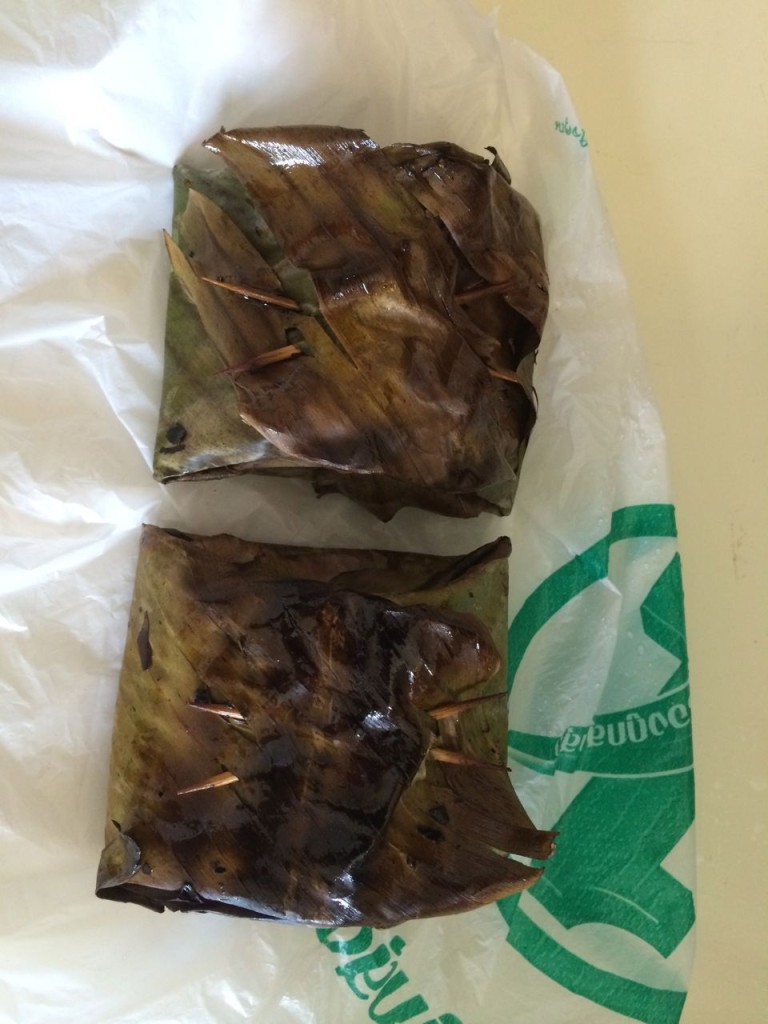 This afternoon, after my morning nap (still sorting out my body clock, but getting more onto a rational schedule), I caught a songthaew over to the supermarket to pick up some midnight snacks to keep in my room. Chiang Mai has neither public transportation nor traditional taxis, so most people get around by songthaew (literally “two rows”), a red pickup truck with a modified cab on the back that has two parallel benches and acts as a sort of communal taxi. 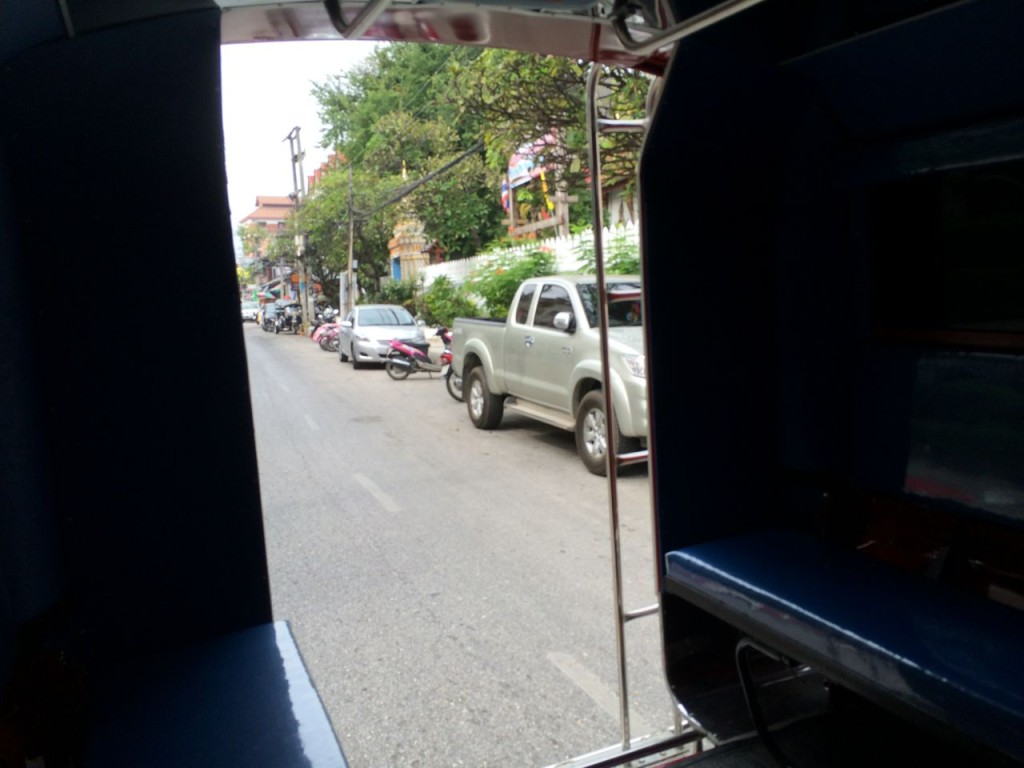 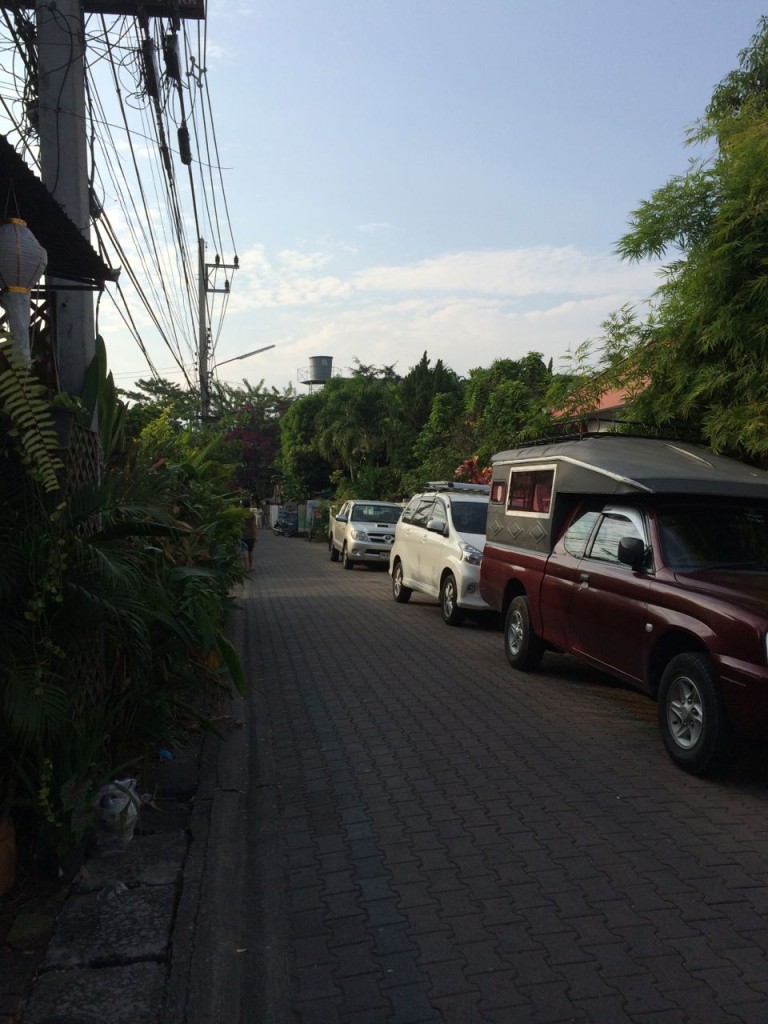 They ply around the city by the hundreds and you just wave them down and tell them where you’re going. If they’re headed in that direction, you hop in and share the ride with anyone else who’s in there. If they’re not going near your destination they’ll tell you no and you just flag down the next one. I went one for three on my first flagging (probably because the grocery store was not a common destination) but caught the first songthaew that I flagged for my ride back home.

After storing my groceries I headed out to a nearby restaurant where I enjoyed a bowl of tom ka gai soup (coconut soup with chicken) and did some work on my laptop. It’s 82 degrees, very comfortable, and other than mosquito bites on my feet, pretty darned close to paradise. The only thing that would make it better were if my gal were here to enjoy the food and perhaps an occasional water landing, if you catch my drift. 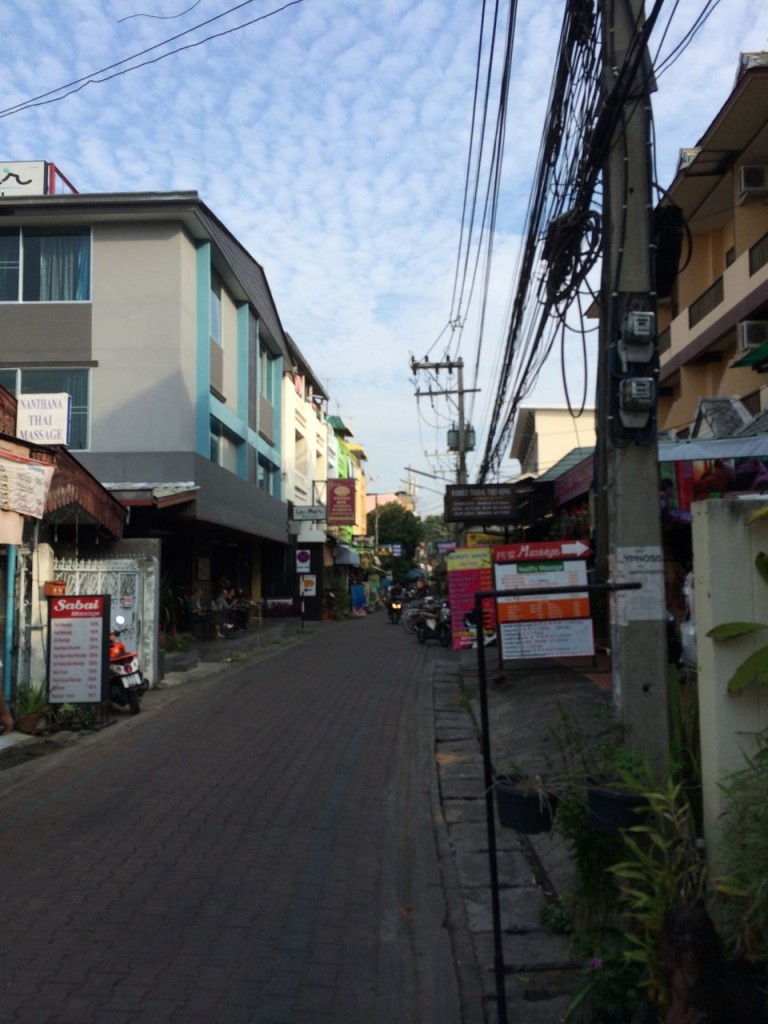