So far I’ve kept my massage-a-day streak intact, with an alternating schedule of foot massages (after long days of walking) and traditional Thai massages (after long days of blogging). Thai massage, which is performed fully-clothed (both of us) on a mat on the floor, involves a lot of stretching, pressure points and flexibility work. It’s been described as having yoga performed on you, which is also my favorite threat in a street fight.

Before the massage you are given a pair of Thai fisherman pants and a blousy top to change into; any bodywork that includes a costume change can’t be all bad. The masseuse then spends the next hour kneading, poking, stretching, bending, folding, spindling and mutilating. Highly recommended.

There are literally twenty massage places within two blocks of my guest house. I’m not sure how they stay in business, considering 99% of the time they appear to be empty and the competition has driven the going price down to $4.70 – $6.20 / hr. Also, none of them really does anything to distinguish themselves from the others. You’d think some marketing genius would come up with pirate-themed massage to really stick out from the crowd.

Speaking of sticking out from the crowd, here’s one style of massage I won’t be experiencing: 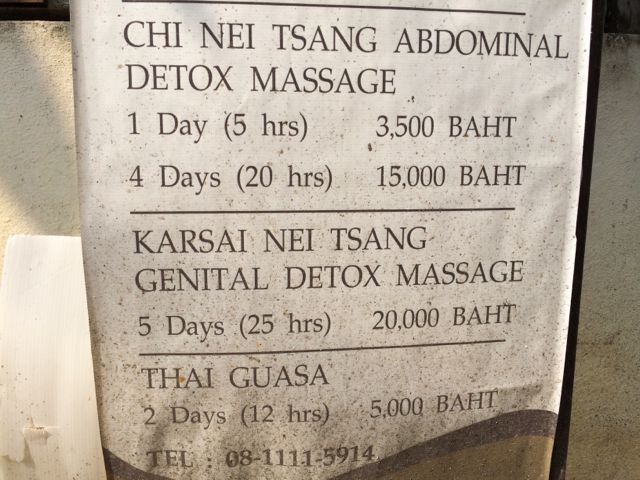 There is no scenario under which my genitals are up for 25 hrs of detoxification. I’m not even so sure that I suffer from Toxic Genitals. Time to consult the internets.

In other important news, I’ve now settled into a weird but effective bi-phasic sleep schedule where I sleep about 4.5 hours each night, with a big 90 minute nap in mid-evening. This is mostly driven by working until 2 a.m. or later to synch up with the other folks at TeamSnap and not being able to sleep past 7 a.m. due to the rooster laugh track outside my window. Yesterday I had meetings until 4 a.m. so I only got three hours of sleep; a good nap around noon perked me right back up.

There’s no better place to be on this kind of schedule, because if I have a half hour between meetings at 11:45 p.m. it’s easy to pop around the corner to the main street where food stalls are still happily cooking; midnight pad thai has become my go-to the last couple nights. (Midnight Pad Thai is also my Maria Muldaur tribute band.) 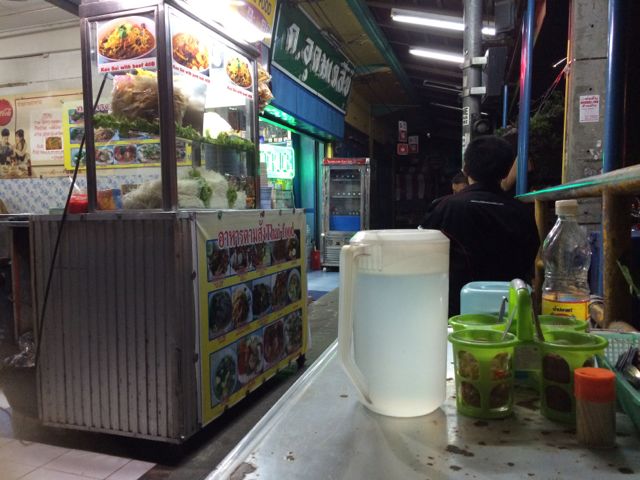 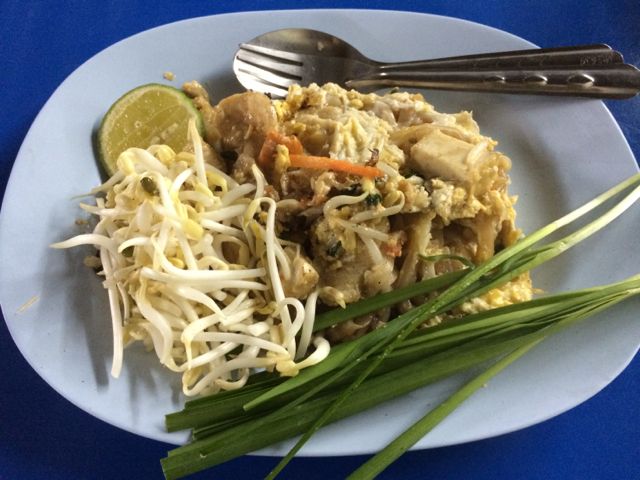 Yesterday I found the Facebook group for Chiang Mai Ultimate (frisbee, not fighting), so I headed over to Chiang Mai University to play a little bit of pickup disc. I flagged down the rare songthaew driven by a woman, and after consulting her map as to where I was going we engaged in the standard songtaew rate negotiation.

Certain things are expected to be bargained for in Thailand, such as everything at the public markets and prices on songtaew rides. Although the price of a ride is nominally 20 baht within the city, the definition of “within the city” is somewhat fluid, and the price for farang (foreigners) is “whatever we’ll pay.” As my destination was on the outer edges of what I’d consider the city, I was prepared to pay more than 20 baht.

Anyway, Hadas would probably describe me as “Not the finest negotiator in the land,” and so given the handicap of bargaining in Thai I was pretty much prepared to pay whatever price the driver named, even if it was 7,000 Euros. As it was, I lucked into perhaps not the greatest Thai negotiator either, because our conversation went like this:

So I was feeling pretty good about remembering all the points I’d learned in my business books about negotiation: Make the other party name the first price; respond with an offer that’s less than you’re willing to pay; and remember that traffic drives on the left in Thailand so when you step out into the street to commence negotiations you don’t get flattened by a truck carrying water buffaloes.

She motioned for me to climb into the front seat, which was a first for me in a songthaew. Along the drive she pointed out places of interest in Chiang Mai and I maintained a death grip on the seat cushion as we sped down the wrong side of the street while I sat in what should have been the driver’s side of the car in America.

Ultimate frisbee was fun. It was a mix of expats and locals. I was one of four people from Portland, just offering more proof that getting out of Oregon in the winter is the patriotic thing to do. I scored a goal or a touchdown or a field goal or whatever points are called in ultimate. I haven’t played since college, but one of the Thai players asked me how often I play, which I choose to take as a compliment.

It was a bit tricky to find a songthaew after the game, as it was dark, but eventually I caught one coming off campus and when I told the driver where I was going he said “40 baht.” So much for my crack negotiating skills.

Today I dropped off my laundry at one of the twenty places that do laundry within two blocks of my guesthouse. I think pretty much everyone who owns a washing machine has a sign out that says “Laundry – 30 baht/kilo.” I asked when it would be done, and the woman either said “tonight” or “stir-fried noodles with pumpkin.” My Thai is still pretty shaky. She also didn’t give me any kind of ticket or claim check, so it’s entirely possible that I’m going to have to pick my clothes out of a police lineup tomorrow. 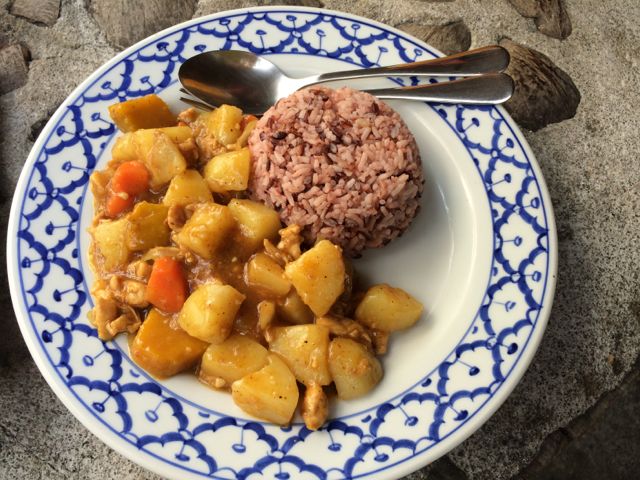 After that I went for a walk and then took my requisite mid-morning bi-phasic sleep nap. I’ve got a busy afternoon of massage and eating Thai food planned, followed by an early bedtime to rest up for the next two days of TripAdvisor Recommended Tourist Activities™. One fun surprise was picking up some meat on a stick that turned out to be rice-in-a-sausage-casing on a stick. Delicious and different than anything I’ve had here yet. 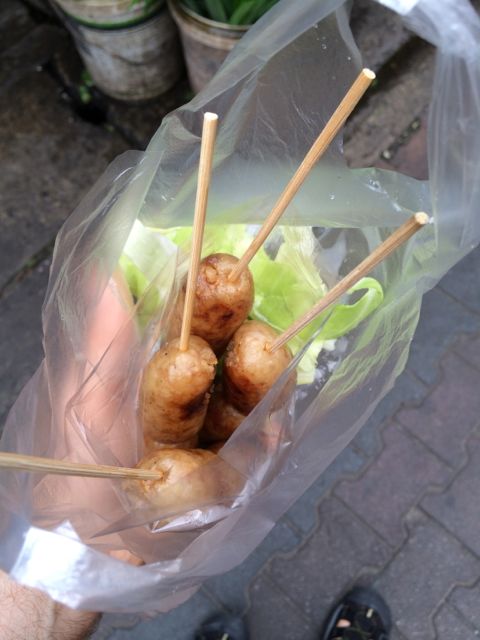 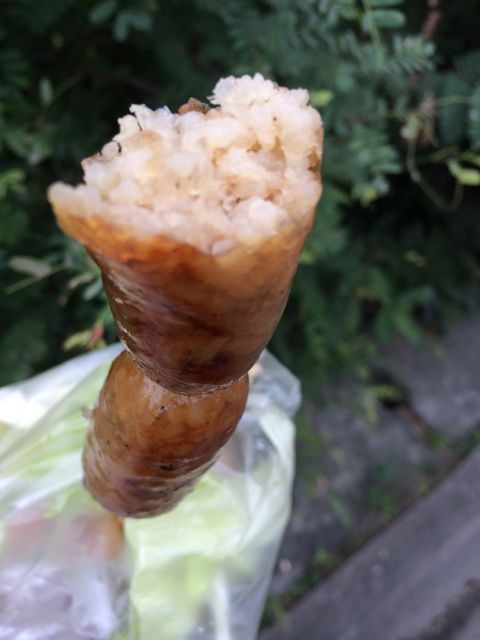 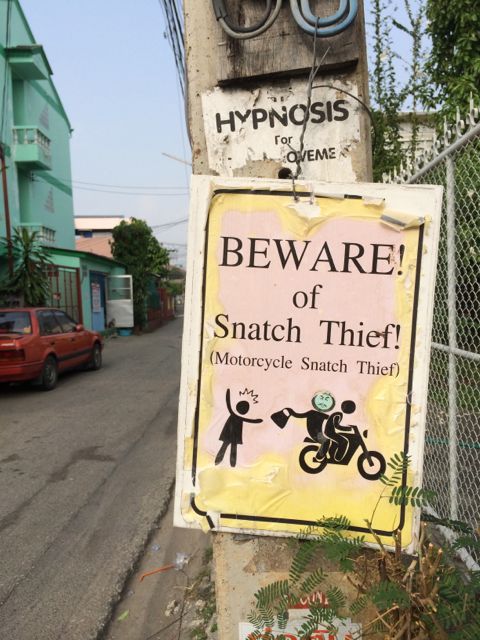 One response to “Days 5-6: The Ultimate Thai Experience”