So it turns out that every tourist in Costa Rica is from Canada.

In the last few days we’ve met people from British Columbia, Alberta, Manitoba and Ontario. I just need Quebec and Yukon Territories to win Canadian bingo. It’s like all of Canada collectively says “Screw this!” in March and heads as far south as they can get. We’re not complaining. Canadians are very nice, especially the elderly retiree at yesterday’s vanilla plantation tour who tried to convince Hadas that he was in arms dealing and gold smuggling. He quickly found out what it’s like to go toe-to-toe with an extrovert improviser. By the end of the conversation she was close to calling his bluff and forcibly removing his pants to look for prison tattoos.

Anyway, the vanilla plantation tour was very interesting. We learned how vanilla beans in the wild do not pollinate fast enough for farming, so they have a manual process that involves poking the flowers with a stick to spread the pollen. They also increase the vanilla plant’s libido by showing it dirty movies. 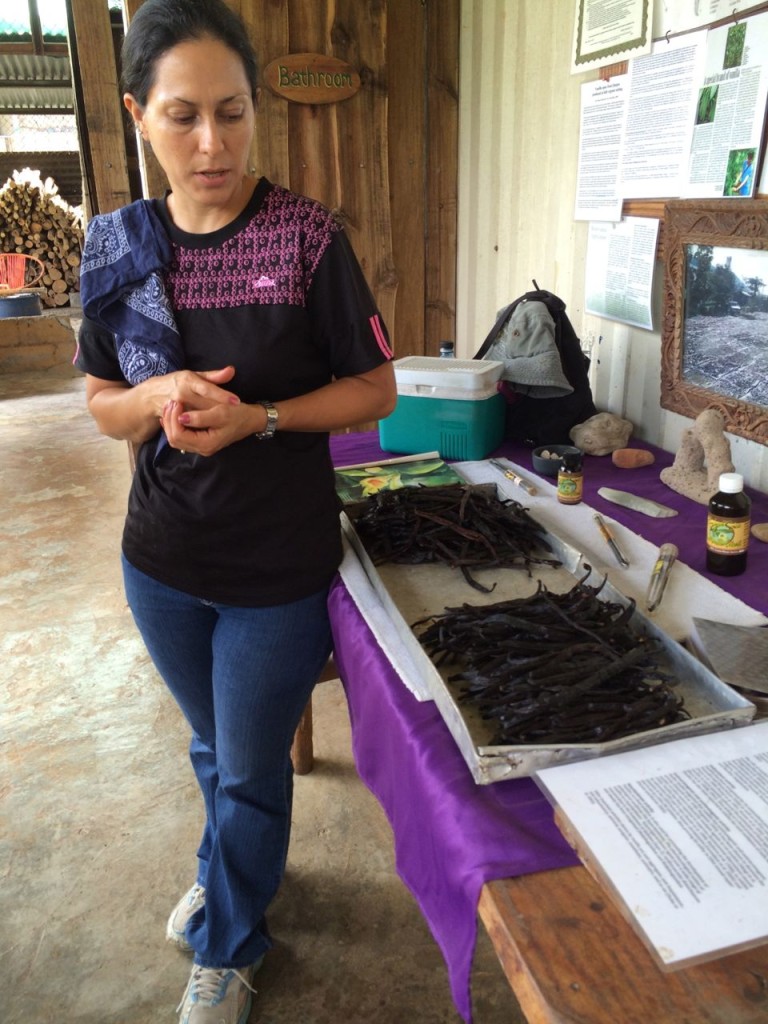 This farm also grows pepper, turmeric, coffee, cacao, pineapple, coconut and cinnamon. The latter is really fascinating. We watched a worker shave the bark off of cinnamon tree logs, and when you pop a strip of the bark into your mouth it’s an explosion of cinnamon flavor, like if you passed out face down in a food court Cinnabon. 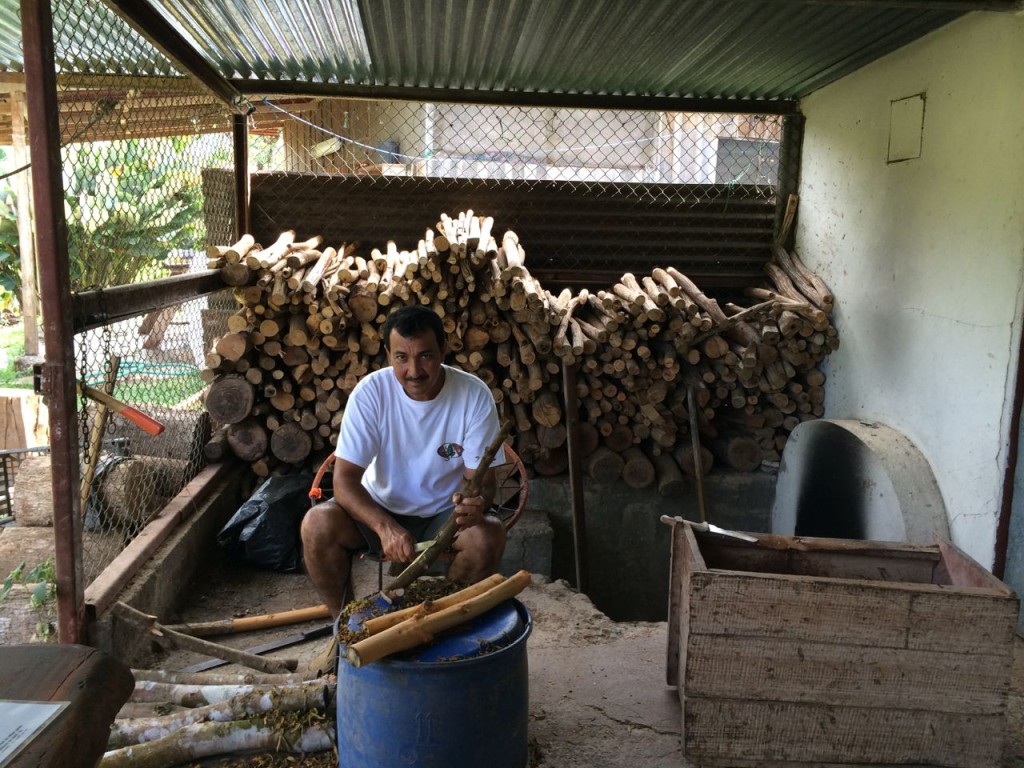 After learning about spice history and sampling some cardamom, cloves, allspice and other goodies, we joined the rest of the Canadians for a walk through the plantation where our guide (Giselle) showed us how the plants grow. We then retired to an open air tasting loft overlooking the valley, where we sampled cinnamon tea, cinnamon ice cream, chocolate cookies, biscuits with cacao nibs and a hot drink with cacao, vanilla and chili pepper. Everything was incredibly delicious and – as this is the most sugar I’d eaten in four years – I immediately bounced off the walls like a hyperactive 2nd grader until the inevitable sugar crash where they had to call my mom to drive down from Alaska to pick me up. Actually I was fine.

Then we walked to the spice shop, where we purchased vanilla beans and cinnamon bark. After a stop at the grocery store on the way home, Hadas cooked up a pulled pork with vanilla, which is about the most delicious thing I’ve ever eaten. If she were to open a restaurant in Costa Rica she’d be a gazillionaire. After dinner, we sat in a hammock overlooking the ocean and watched the sunset, and then Hadas engaged in the traditional passing out at 9 p.m.

Today we went ziplining. We had ziplined in Mexico a few months ago, but because the Yucatan Peninsula is flat as a tortilla the zipline towers were man-made and we didn’t so much soar through nature as soar through a large flat lot covered in scrub brush. Today’s ziplining was the real deal, as the zipline course is built into a mountainside in the jungle and we were able to whiz over and through the forest, with trees shooting past our heads as if we were in Return of the Jedi. Our ziplining party included a couple Canadians (of course), two Texans, a pair from Boston and two Belgians who were wearing shorts that could best be described as “insufficient.”

This particular zipline company’s claim to fame is the longest zipline in Costa Rica — nearly a mile long. And let me tell you, riding a zipline that goes for a minute and a half is the way to go. While waiting for our turn to fly I enjoyed chatting with the guides in Spanish, and Hadas enjoyed imploring them to let her ride the zipline upside down like a suicidal opossum.

Besides ziplines, we also walked from tree to tree on crazy bouncy suspension bridges, and climbed platforms high into the top of the forest canopy. While standing near the top of one tree we saw three toucans up close — our first toucan sighting in Costa Rica. They are bigger than I was imagining, but every bit as exotic-looking. After watching the toucans for 10 minutes I had an irresistible urge to down an entire box of Froot Loops, so they had to call my mom to drive down from Alaska to pick me up.

After finishing the course they fed us a traditional lunch and engaged in the traditional hard sell to try to get us to purchase photos from our day. Hadas is smiley and photogenic in each shot, and I have an expression that says “This harness is cinched exceptionally tight around my toucans.”

Just when we were about to get out of the pool, monkey hour started. At first one monkey crossed 10 feet above our heads on a telephone wire, followed by another and then another. Soon there were 15 monkeys cavorting around the pool, climbing trees, chasing across roofs and scurrying down drainpipes. Three of the boldest monkeys actually came over to drink out of the pool we were currently occupying, not four feet from us. This was both (a) adorable and (b) gross. I’m not saying that there’s anything wrong with drinking MY pool water, but earlier it had been occupied by a number of sketchy Canadians.

After a half hour or so monkey hour was over, so we returned to the room for more vanilla pork (the dish, not the bestselling adult movie) and then walked into town for a sunset trip to the grocery store. The long hike back up to our cottage was made even more challenging by the fact that I was carrying 25 pounds of watermelon, pineapple, tortillas and wine on my back, but it gave me a heck of an idea for a Crossfit workout when I get back home. I need to talk to the trainers at my gym.

[Note: Hadas and I are writing he-said, she-said blogs about this trip. I’ve changed a few details for artistic license. For instance, we are actually vacationing in Norway. You can read her blog at klutzinmypants.wordpress.com.]

One response to “Costa Rica Days 8-9: Swimming in Monkey Water”