So funny thing — after spending the better part of the last month brushing up my Spanish I managed to come to the one part of Spain where Spanish isn’t the first language. Not everyone knows this (I sound like I’m playing Wikipedia) but this region of Spain is known as Catalunya and the official language is Catalán, which looks and sounds like a cross between Spanish and French. For the most part, I can figure it out when it’s written, but I can’t understand it at all when it’s spoken.

Luckily, it appears that most everyone here also speaks Spanish, so when I talk to people they generally start in Catalán and then switch into Spanish when I speak. Everyone appears to understand me, but then again my Spanish is so sketchy that it’s possible they’re just nodding to be polite. For the most part, signs are in Catalán and Spanish, and sometimes English in the touristy parts of town. For many phrases, the Spanish and Catalán are so similar that it’s kinda funny that they bother to write both.

I will spare you fourteen paragraphs on Spanish-Catalonian politics. Google it or wait until we get it as a suggestion in Wikipedia.

Two things I have learned about laundry while in Barcelona

2) Removing both clothespins at the same time may be a bit of a timesaver, but it also means that your long-sleeve running shirt plunges nine stories into an inaccessible alley.

I slept in yesterday morning and then headed out to meet my brother and sister-in-law for some sightseeing. Unfortunately, the main sight we saw when we got out of the subway was a thunderstorm, so they decided to head back to their hotel and see the sight of a nap, and I headed back to my neighborhood for a little bit of exploring. This neighborhood is called Eixample (pronounced: “Yonkers”) and was built with careful urban planning instead of the hodge-podge see-what-sticks of many cities.

I quote from the real Wikipedia:

The Eixample is characterized by long straight streets, a strict grid pattern crossed by wide avenues, and square blocks with chamfered corners (named illes in Catalan, manzanas in Spanish). This was a visionary, pioneering design by Ildefons Cerdà, who considered traffic and transport along with sunlight and ventilation in coming up with his characteristic octagonal blocks, where the streets broaden at every intersection making for greater visibility, better ventilation and (today) some short-stay parking space. 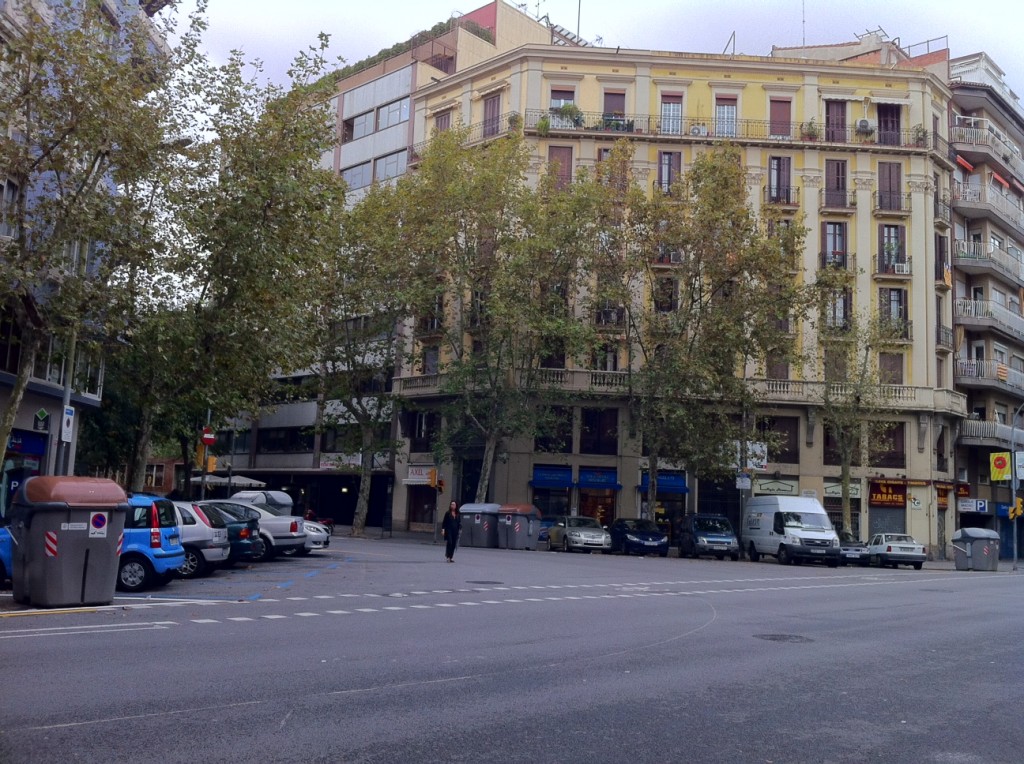 It really does seem like a well-planned design, and the wide sidewalks accommodate impressive amounts of scooter parking. Scooters seem to be the preferred method of transportation here, and on many blocks you see dozens of scooters lined up on the sidewalk. It’s a scooter-rama. 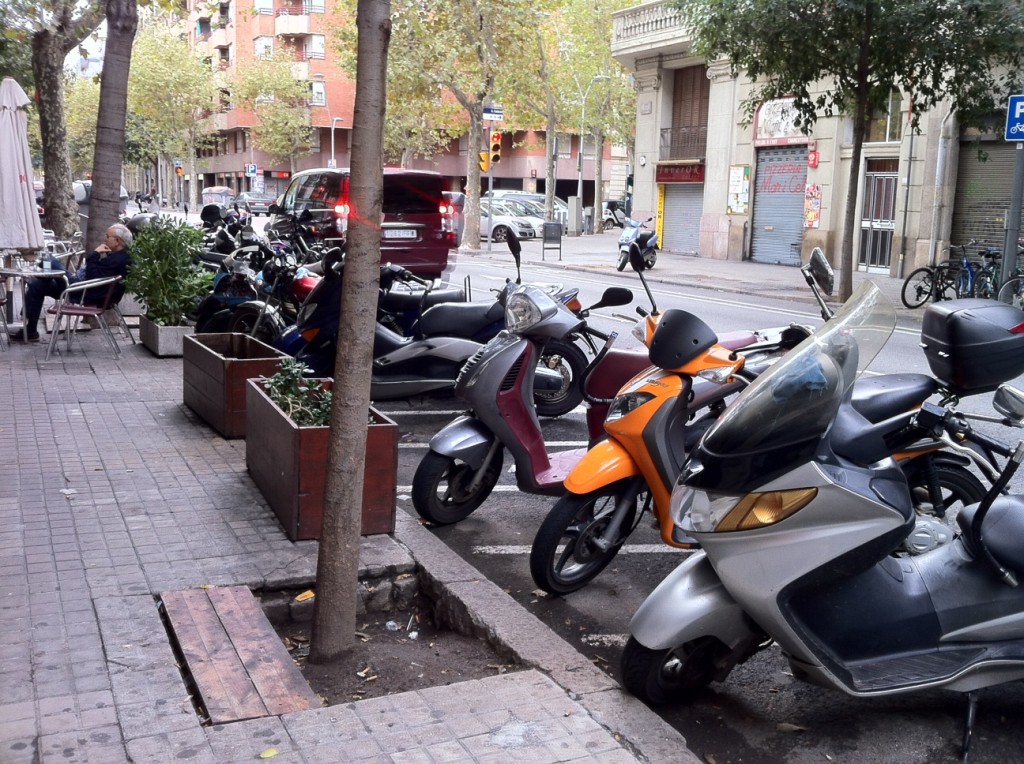 They also have adorable trash and recycling dumpsters on every corner, instead of people putting out individual garbage cans. These look like they were built by the Teletubbies. 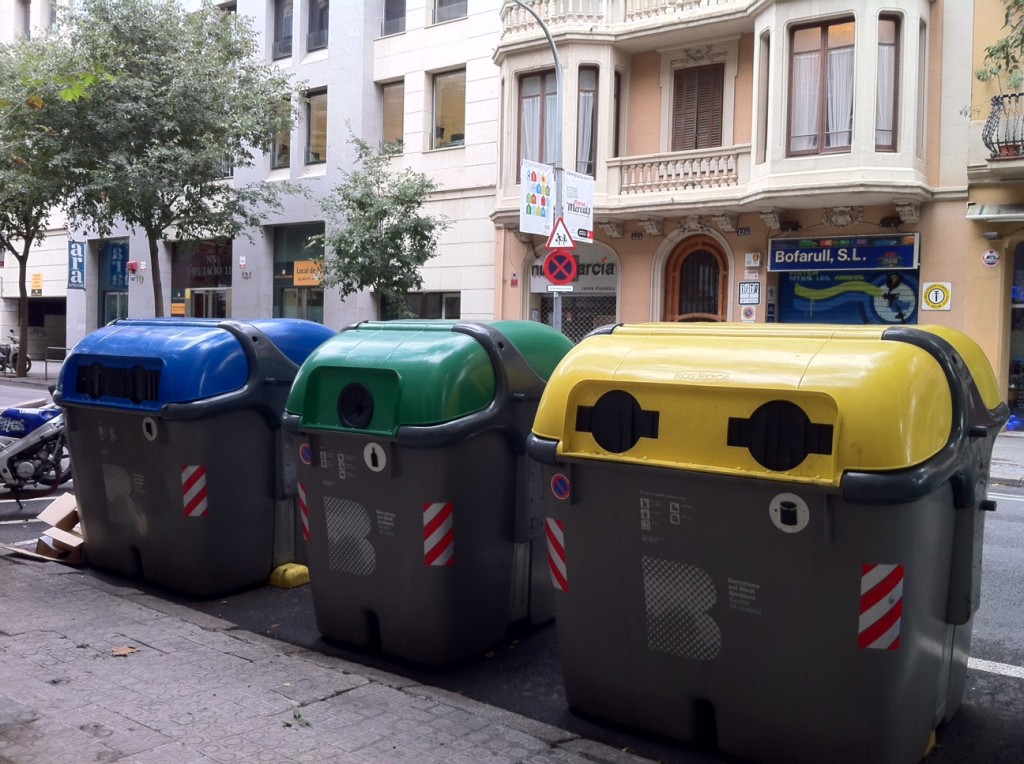 After an afternoon nap and some work, I headed out to meet a MeetUp group for a run. If you’re not familiar with MeetUp, it’s a website where people can create ongoing or ad hoc groups for most anything. The Barcelona Casual Road Runners caught my eye. They have a group 10K run every Tuesday and Thursday night at 8 p.m., and I thought it might be nice to run with a group of people who actually know the city. Based on my sense of direction, it’s highly likely that running by myself I’d end up in Iceland.

About 15 people showed up for the run, a mix of locals and expats. A couple Americans, a couple Brits, a German and so on. I got my very first European air kiss on both cheeks when greeted by one of the women, and I handled it with the kind of smoothness that says “International incident.”

We set out at a nice pace, and after about 15 minutes I started up a conversation with a guy who was from Colombia, currently studying for a Ph.D. We talked about Colombia (he recommended it as a vacation destination), Barcelona sightseeing and some other stuff that I only half caught because my Spanish comprehension is mediocre at best. He was kind enough to correct some of my grammar without doubling over in laughter.

Unfortunately, he was also a faster runner than me, so the combination of running fast, trying to think in Spanish and also trying not to run off the edge of the pier wore me out. I was flagging by the end. Luckily, I perked up when he asked what I do for a living and I told him I work at TeamSnap and he said “Oh, I know TeamSnap!” It’s a small world, folks. When I returned from my run I took the elevator up to my apartment, opened the door, turned on the light and there was a giant bug in the middle of the floor. Like two inches long giant. Carefully keeping to the walls of the apartment, I crept around toward my travel bag, where I keep a mini flashlight. I shone the flashlight on the bug from 10 feet away to see if it was moving. Answer: inconclusive.

I then went and got a mop and poked the bug to see if it was still alive. In my last experience with a giant bug (Mexico), the bug had decided to die in the middle of the floor, so I was hoping this was a similarly-minded bug. It wasn’t moving.

I grabbed my camera, so I could either document the death of the bug or the death of me. When I got close enough to take a picture I realized that the bug looked like an ant. A giant ant. A giant plastic ant. A giant plastic ant that my girlfriend had managed to stealthily hide in my running shoes, and which I had somehow managed to drop on the floor before I left the apartment and then failed to notice during the 10 minutes I was walking around the apartment in my running shoes. This is not a big apartment. The plastic bug takes up approximately 1/3 of the square footage.

This is not a new prank, mind you. Hadas knows that I am not fond of insects, so she went out and purchased a collection of realistic giant plastic bugs — beetles, spiders, etc — which she occasionally sneaks under a pile of papers on my desk or into my pockets just to hear me scream like a little girl. She once managed to sneak one onto my shoulder, leading to a shriek of unparalleled manliness.

Well played. Someone’s getting an off-color t-shirt when I get home. 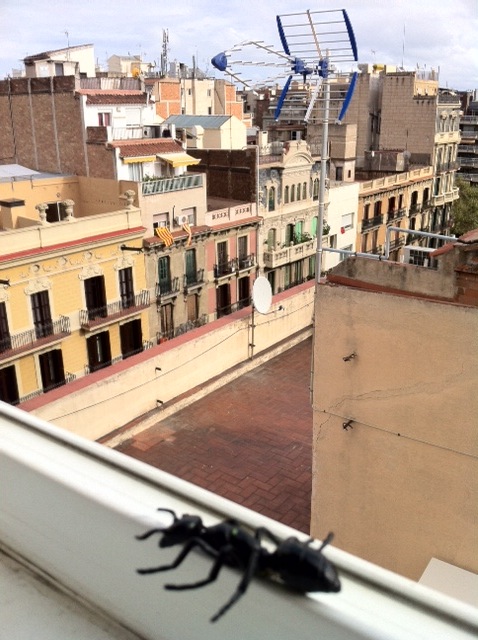