Despite the city’s deployment of the magical SUBE bus pass that obviates the need to hoard change for bus fare, there’s still a fairly major coin shortage here in Buenos Aires. Thus every transaction at the grocery store involves the following steps:

The “other scheme” is more common than you’d imagine. So far I’ve been given change in hard candies and onions. When I get back to Portland I’m totally going to make decisions by flipping an onion.

All of these high-level transactional negotiations have been tough for me because of the small detail that they don’t speak Spanish in Buenos Aires. I mean, technically it’s Spanish, but it’s like no other Spanish you’ve ever heard before. I’d been told before I came here that the Spanish in Argentina was “hard to understand.” That’s kind of like saying Chinese has some “minor differences from English.” I am not bad in Spanish, but I literally cannot understand anything that people are saying here. It’s heavily accented, slurred, filled with slang and alternate grammar and borrows heavily from Pig Latin. OK, I made that last one up. But even when the context should be obvious — for instance, checking out at the grocery store — I can’t parse what the cashier is saying. You’d think I’d be able to suss it out when the options are basically:

True story: An orthodontia student from Venezuela joined our Boot Camp class last week, and her Spanish was so clear I thought she was speaking English.

But I persevere. After Boot Camp last Thursday I walked back to the bus stop with a guy from the class, and during our 15 minute conversation in a mix of English and Argentine Spanish we managed to cover his work, my work, the job market in both Argentina and the US and the relative difficulty of starting a business in each country. Or maybe we discussed fly fishing and where to purchase the best Cuban cigars. I’m still not totally sure.

Every large city around the world has a contingent of English-speaking expats, and Buenos Aires is no exception. While reading through one of the expats’ online message boards I learned about an event called Beerlingual, a weekly bi-lingual pub quiz. That seemed like a great opportunity to engage in my three favorite pastimes: Meeting strangers, drinking beer and looking like an idiot. (Note to those whose browser isn’t rendering the sarcasm font properly — only one of those is among my favorite pastimes.)

A girl from Texas had posted on the board that she was thinking of going to the pub quiz this week, so I messaged and arranged to meet her there to form a team. I made sure to mention my girlfriend 45 times in the message so as not to come across as a weird stalker type who was looking to hook up. I also urged her to invite other friends. Weird stalker types don’t do that, right? It’s been so long since I’ve been weird or stalky.

I got to the bar at 7:15 for a 7:30 pub quiz, failing to take into account that nothing in Argentina starts even remotely at the actual start time. I think we finally kicked things off around 8:15. I teamed up with Mary from Texas and several of her friends, including a brother and sister from Buenos Aires by way of American schools in Dubai and a couple of other Americans from New Jersey and New York. All expats seem to teach English, so the “What are you doing here in Buenos Aires?” conversation is always really short.

The first category in the quiz was “Regional Current Events.” Not having watched last night’s Eyewitness News Uruguay, we flailed pretty heavily. We did better in the remaining categories, including science, The Oscars and art. I was able to flash my nerd credentials a couple times in the science category, including being the only person in the bar who knew what the computer language BASIC stands for (it stands for SCUBA).

In the end we finished fourth out of five teams. The low point was when we all agreed that the best answer to “Who invented the ballpoint pen?” was “Some dude named Bic.” (Actual answer László Bíró.)

While my friends in Portland are starting to celebrate the early signs of spring, everyone here is celebrating the end of summer but lamenting the oncoming fall and winter. Right now I would call the weather here “perfect.” It’s going up to the high 70s or occasionally low 80s during the day, and dropping down into the low-mid 60s in the evening. Or so I estimate. All the temperatures here are in Celsius. We had a Celsius question in the pub quiz and all of us stood around like drooling idiots trying to remember details from junior high science class. I think 75 degrees Fahrenheit is about 34 kilograms.

Anyway, after warm days, every few nights brings high winds or a spectacular thunderstorm; two days ago I woke up and there were puddles of water in the kitchen and bedroom from rain that had blown in under the doors. My security deposit should not be used for investment purposes.

With weather like this, it’s been easy to get out and go running, and in many cases it’s just plain easier to go sightseeing by running between destinations instead of bothering with the bus. On Saturday I went down to Puerto Madero, the neighborhood build by the river that mixes modern steel-and-glass highrises with buildings that look imported from the British docks. 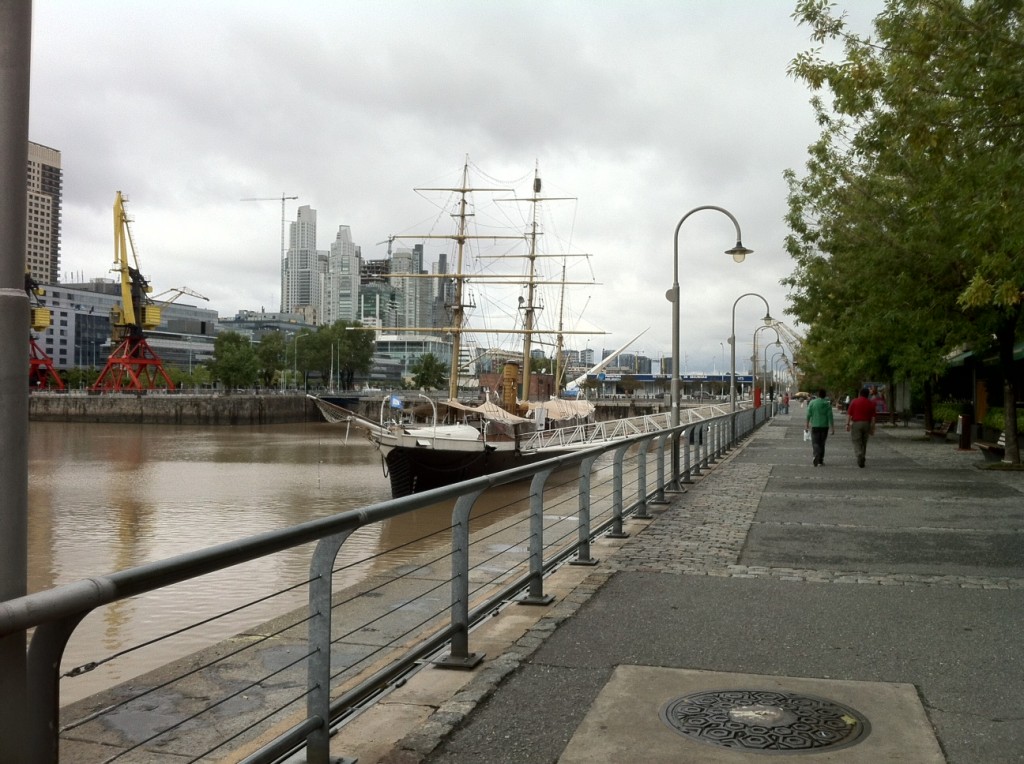 One of the most recognizable landmarks is Puente de la Mujer, a striking bridge by Spanish architect Santiago Calatrava. Recognizing a good opportunity when he saw one, Calatrava sold similar bridges to the cities of Seville, Spain and Sacramento, California, i.e. three of the most popular tourist destinations for savvy world travelers. 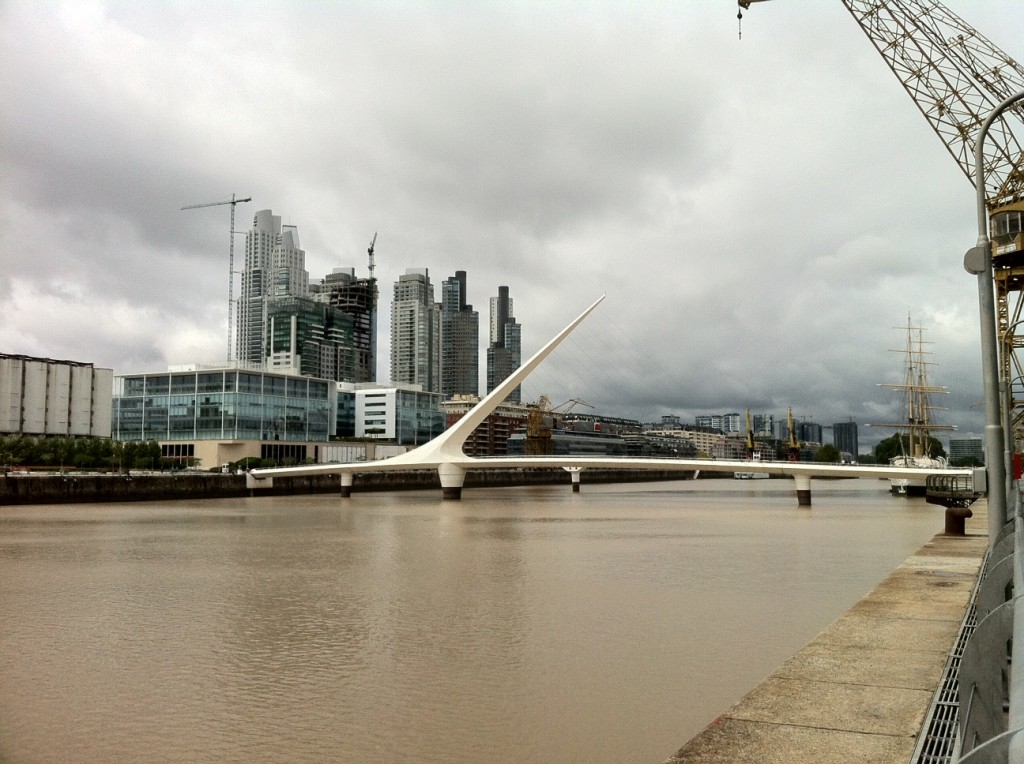 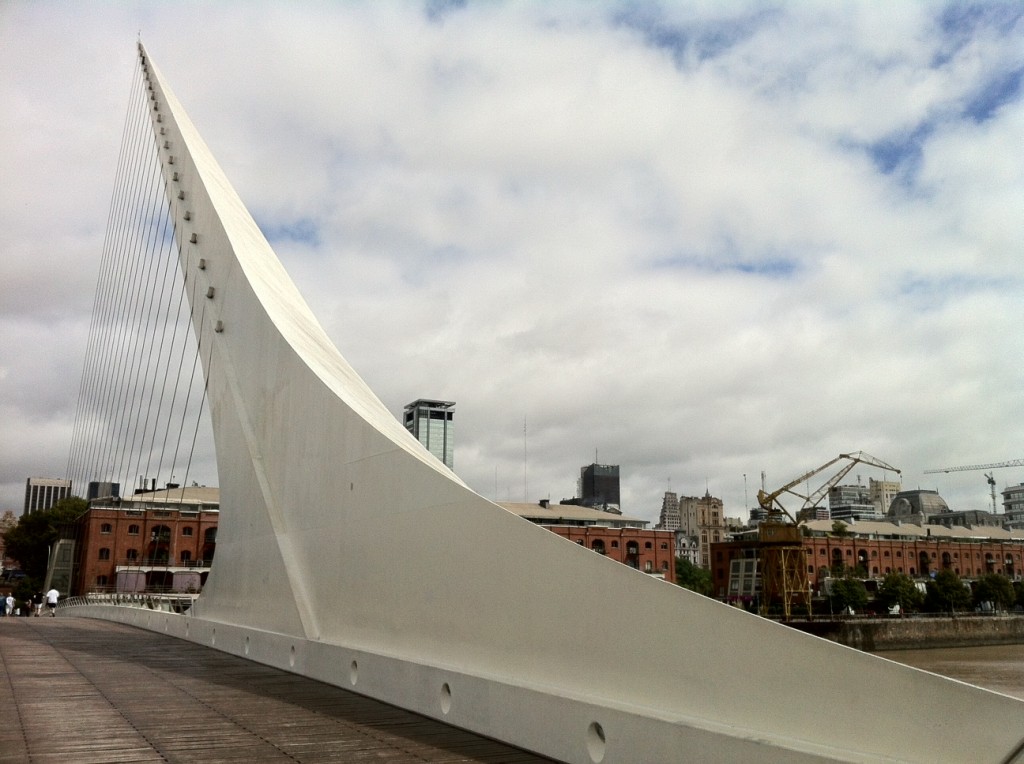 Yesterday I went for an eight mile run, highlighted by a tour through Recoleta, Buenos Aires’ poshest neighborhood. Recoleta suffers from much less of the graffiti, piles of trash, broken pavement and other urban blight of the rest of the city. It’s also where most of the tourists stay, so I’m glad I’m not living there. It looked to be overrun with pasty tourists in Bermuda shorts. If I were in the business of mugging tourists, that’s totally where I’d open my mugging store.

I visited La Recoleta Cemetery, which the BBC has hailed as one of the world’s greatest cemeteries and which CNN listed among it’s top 10 cemeteries in the world. (Nate Silver projects it at #3.) Wikipedia describes it thusly:

Set in 5.5 hectares (14 acres), the property contains 4691 vaults, all above ground, of which 94 have been declared National Historical Monuments by the Argentine government and are protected by the state. The entrance to the cemetery is through neo-classical gates with tall Doric columns. The cemetery contains many elaborate marble mausoleums, decorated with statues, in a wide variety of architectural styles such as Art Deco, Art Nouveau, Baroque, and Neo-Gothic, and most materials used between 1880 and 1930 in the construction of tombs were imported from Paris and Milan. The entire cemetery is laid out in sections like city blocks, with wide tree-lined main walkways branching into sidewalks filled with mausoleums. While many of the mausoleums are in fine shape and well-maintained, others have fallen into disrepair. Several can be found with broken glass and littered with rubbish. 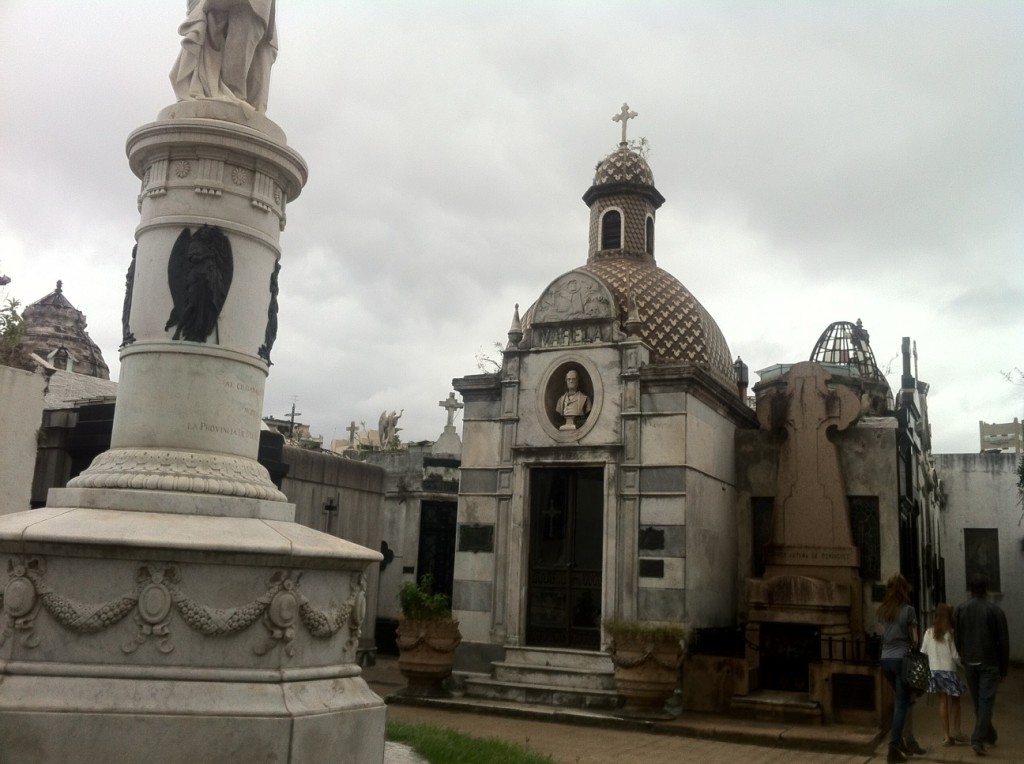 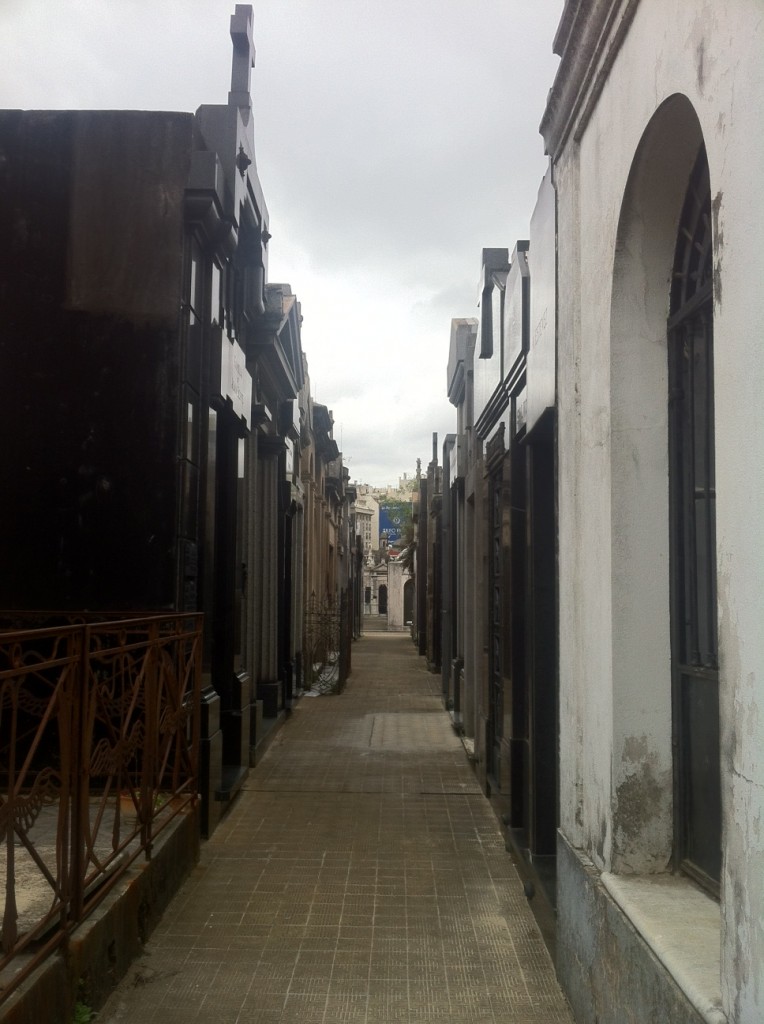 Many famous people are buried there, including the granddaughter of Napoleon, multiple Nobel Prize winners and Eva Perón, who inspired the Broadway musical Annie.

Besides being a mixture of dramatic and somber, with a side-order of creepy, the cemetery features a large contingent of feral cats who hide in and among the tombs. Overall, it’s an A+ tourist destination, especially because there are vendors outside the gates hawking bottles of agua sin gas that are very welcome to those taking the running tour of Buenos Aires. 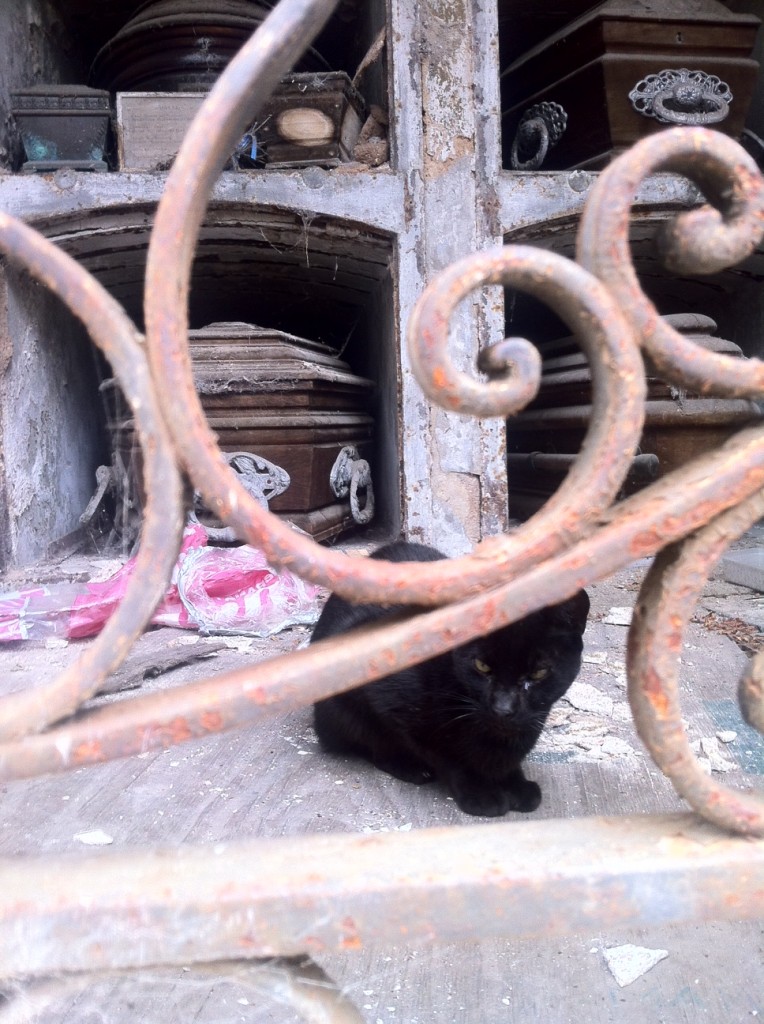 Last night I participated in Second Story Buenos Aires, an English-language storytelling show. The event was in a second-floor (get it?) speakeasy  in the Almagro district, about a 20 minute bus ride from my apartment. It took me about 10 minutes to find the actual joint, as I had the address wrong and was looking for a street-front bar, not a hidden club up a set of stairs with a three inch sign on the wall. Luckily there is free McDonalds wi-fi on nearly every corner, so I was able to refer back to the Facebook invite to get my bearings.

There were six storytellers, a mix of Americans, Brits and Irish. The highlight of the night was a 20-minute story told by an Irish chap about a tour of Mongolia that eventually ended up hundreds of miles out of the way to spend the night in the one-room hut of his driver’s family, watering the driver’s cousin’s camels and finishing with a wrestling match against the patriarch and sons of a nomadic tribe. It was a great story that had the audience’s full attention the entire way. It also made me not so eager visit Mongolia, despite the fact that it’s probably easier to understand the Spanish there.

Afterward I chatted up a few of the folks in the audience, including a gal from Bellingham, Washington who (surprise!) teaches science instead of English. And a gal from Shropshire, England, who was shocked when I said I had actually heard of Shropshire. I’m not honestly sure where I’ve heard of it before, and in retrospect I may be remembering something from a trailer I saw for The Hobbit.

Anyway … it was a fun evening filled with laughter and delicious pints of the local agua sin gas. I tipped the bartender two leeks.

One response to “Pocket Full of Jingling Onions”