You can’t throw a stick without hitting an elephant tour in Thailand. And come to think of it, most of the tour companies should probably be hit with sticks anyway, to give them a taste of their own medicine. The traditional method of “taming” an elephant involves restraining it in a tiny cage and beating it until it bleeds, so there’s a huge gray area around what it means to be a responsible patron of elephant tourism.

Speaking of huge and gray, I went on an elephant tour, and it was awesome. 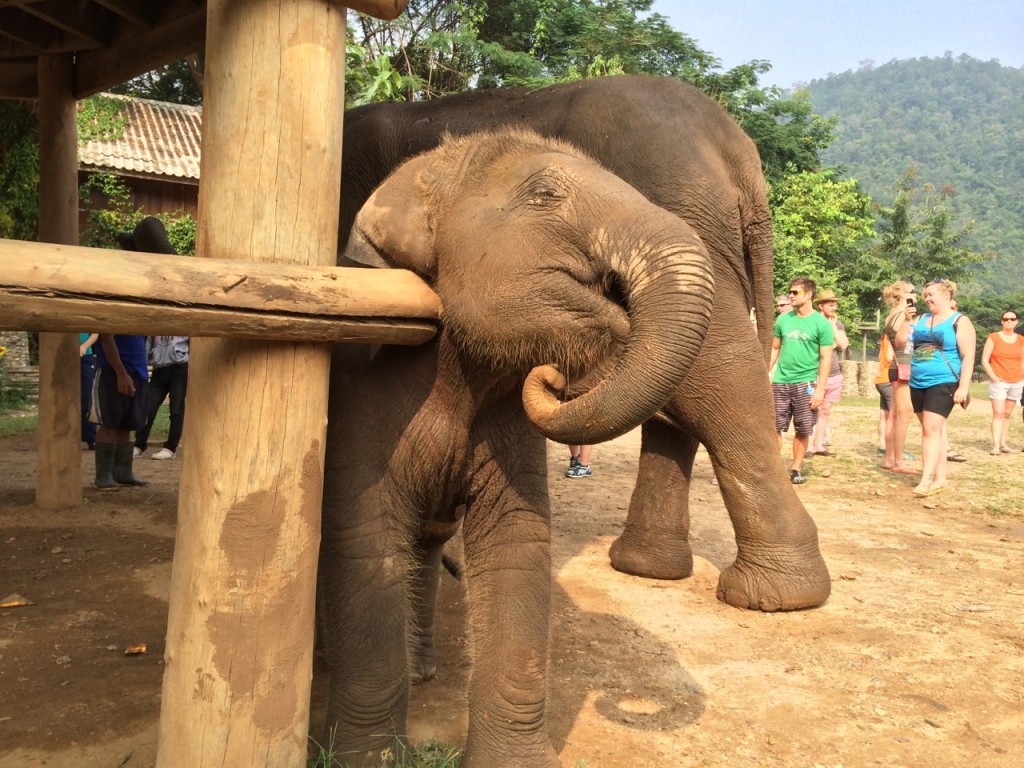 After perusing many options and discarding the tours where they make elephants do unnatural, demeaning tricks like dancing, painting or appearing as a guest rapper on a Justin Bieber song, I chose Elephant Nature Park. Unlike most other tours, this park is specifically set up as a rescue center for abused elephants. You don’t ride the elephants or pretend to be their “mahout for a day.” Instead, you visit to spend time with the elephants and learn more about the park’s mission. They have one-day options for those who want to get a taste of elephants (tastes like chicken) or two- to seven-day volunteer trips where you live at the park and help it operate. I chose the single day tour, because much as I love animals I also love showering.

I was picked up bright and early in an air conditioned van and we sped toward the park, about an hour from Chiang Mai. Along the way our perky tour guide “Bee” (not her real name — or species) gave us rapid-fire instructions about how to interact with the elephants: Don’t stand behind the elephants; don’t put your hand in the elephant’s mouth, don’t invest more than 20% of your pre-tax income in any securities offered by the elephants. Common sense stuff, if you ask me. We also watched a DVD, where two breathless naturalists searched for elephants in Thailand; apparently they hadn’t noticed the brochures in front of every guest house.

Elephant Nature Park sits in a bucolic valley in the mountains north of Chiang Mai. At 250 acres and about 35 elephants, there’s a LOT of room to roam. The four males and 31 females spend their days wandering around the park, split into a number of self-selected female family groups, as well as some loners and the solitary males. They range in age from four months (tiny, gray and wrinkled) to 80 years old (enormous, gray and wrinkled). A few of the elephants were born at the park — apparently they have no problem getting it on in captivity — but most were rescued from awful situations: abused pets, elephants used for begging on the streets or former logging elephants. 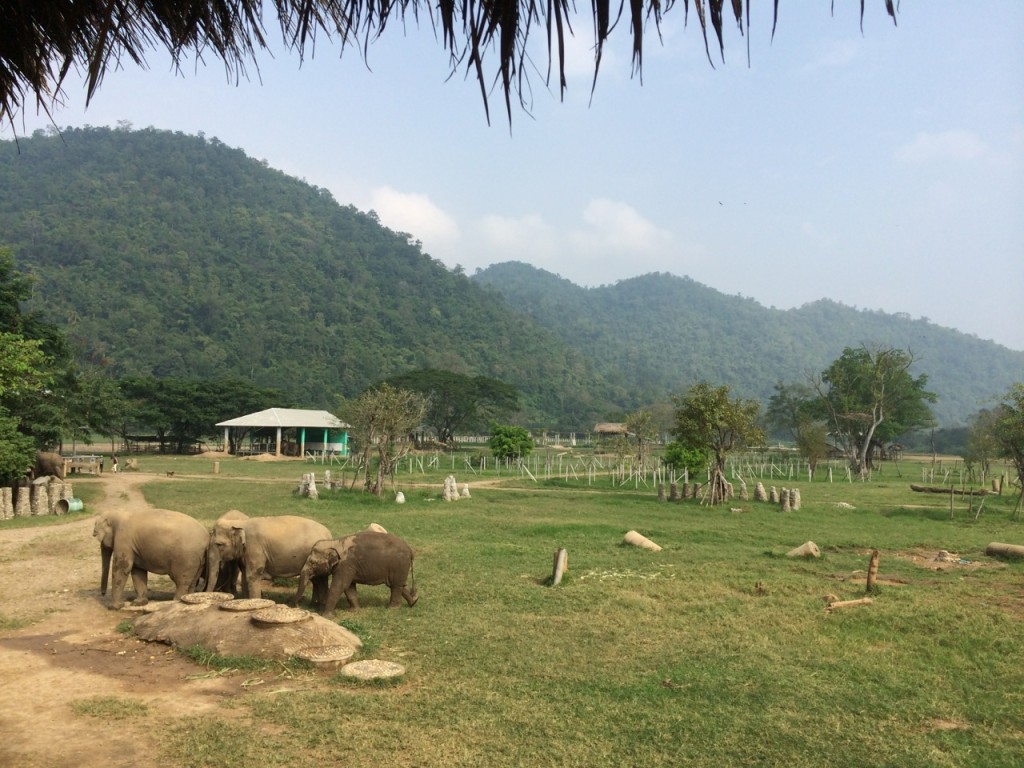 The latter is a typical and difficult situation. In 1989, Thailand outlawed logging when they noticed that they’d deforested 80% of their country. Good for trees and good for the few remaining wild elephants, but a tough situation for the over 3,000 elephants which worked in the logging industry, uprooting trees and hauling logs. Now unemployed and not easily re-trained into IT, those elephants had nowhere to go. Some were sent to Burma, where elephants are still used for logging; others ended up with beggars on the street or working in the tourism industry, giving rides and performing tricks. It’s all a very messy situation with no easy answers.

But for Elephant Nature Park, the answer is simple — take in as many elephants as they can rescue, no matter how old or injured. Some of their elephants are in robust health, but others are blind or hobbled. One has a broken hip from being hit by a car; another had a foot blown off by a land mine. The 80-year-old elephant is in fine health, but mostly hangs out near the feeding platform waiting for snacks and Matlock reruns.

After arriving at the park and stowing our backpacks we immediately launched into feeding the elephants! We were given huge baskets of bananas and large, hard gourds. The elephants would hork up the food as fast as we could hand it to them. I was amazed at how dextrous their trunks are. They can balance an entire bunch of bananas, juggle a gourd or pick a single banana off the ground with a deft touch. We all started out tentatively handing food to the eager trunks, but eventually were shoveling food to the elephants as fast as we could.

The gourds looked like the kind of hard squashes you’d put on your table for Thanksgiving, either decoratively or ironically. Each was about the size of a volleyball. The elephants would just pop them into their mouths like a grape and crunch down with their four giant teeth, flattening the gourds in an instant. An elephant can eat up to 500 kilograms (American units: 220 inches) per day, so the park goes through a LOT of bananas. 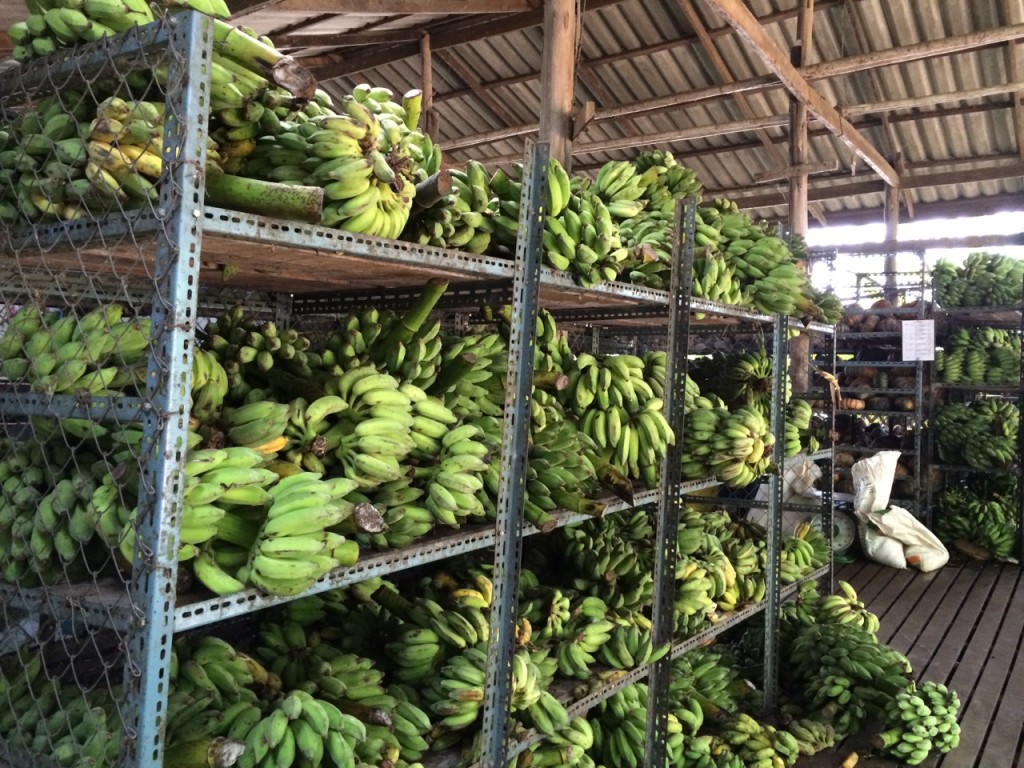 It was surreal to be standing next to four full-grown and one baby elephant, as they gently walked around us. This may be the least-surprising revelation of my entire trip, but elephants are HUGE. And yet, they seem like such quiet, gentle creatures that I never felt scared even when they were towering over me or I was shoveling food to their eager trunks. It occurred to me that if this were the USA I’d have had to sign a 16-page liability waiver and observe the elephants from a “safe distance.” Here they handed us baskets of gourds and admonished us to “try not to get stepped on.” 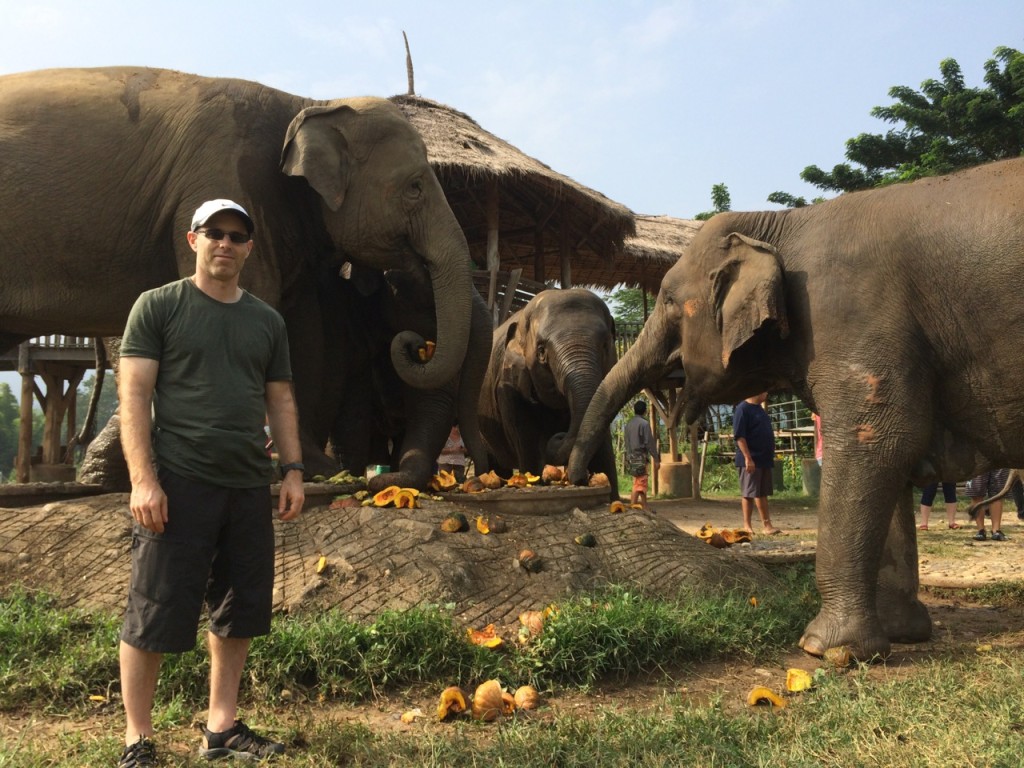 It’s hard to exactly “pet” something that’s the size of a Ford Econoline van, but I spent a fair amount of time rubbing their trunks, scratching behind the ears or stroking their hide. Elephant skin is rough and thick, with bristly hairs; their trunks are muscular and strong; their ears made of the softest, drooping skin. One of the pregnant females came over for a snack and Bee showed me where to put my hand on her enlarged belly to feel for the baby. Elephants are pregnant for two years, although they still never manage to get the baby’s room painted until the week before labor.

After feeding time, Bee took us on a walking tour to meet some of the other elephant families. We met the seven-month-old who was being cared for by three mothers; the blind elephant who spends every day with her protective best friend; and we checked out one of the males from afar, who kept trumpeting for some of the lady elephants to come over for a “back rub.” 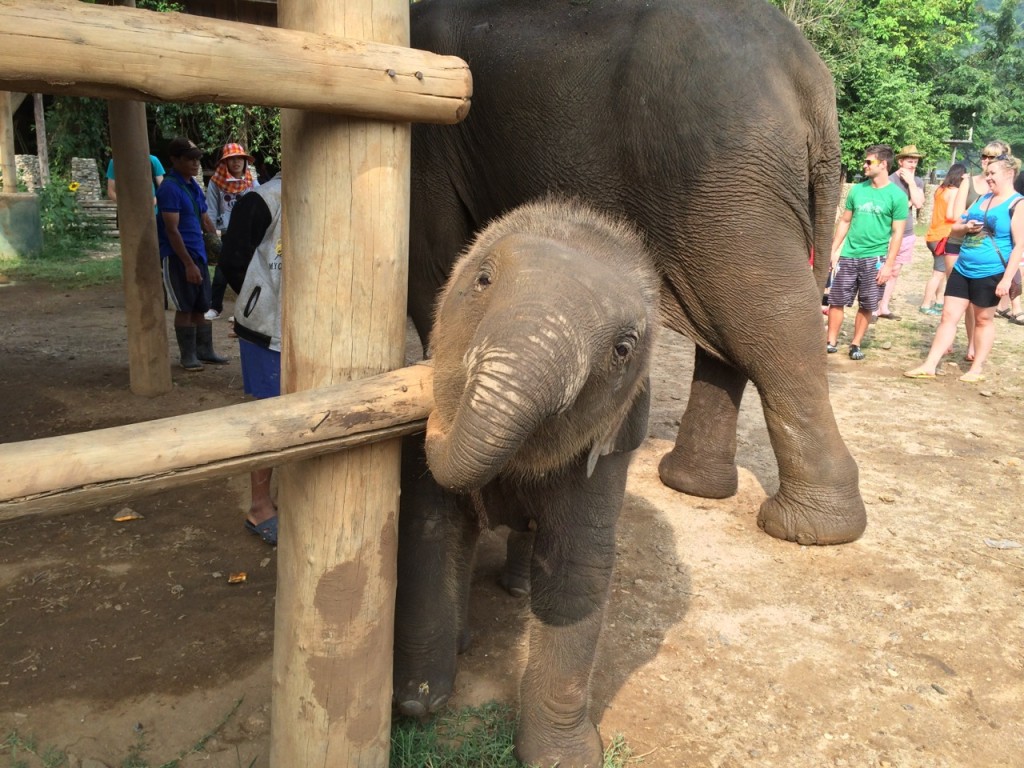 After we ate a hearty vegetarian lunch of bananas and gourds (kidding — it was Thai food and french fries) we went down to the river for bathing time. The elephants stood at the water’s edge and we fed them more food while throwing buckets of water on them. It had rained the night before so the river was especially high, and after finishing their afternoon snack the elephants walked to the middle of the river and plopped over for a swim. They trumpeted in delight. Afterward, they climbed out onto the riverbank and tossed dirt over their heads and onto their backs, providing a protective coating from the sun and insects. 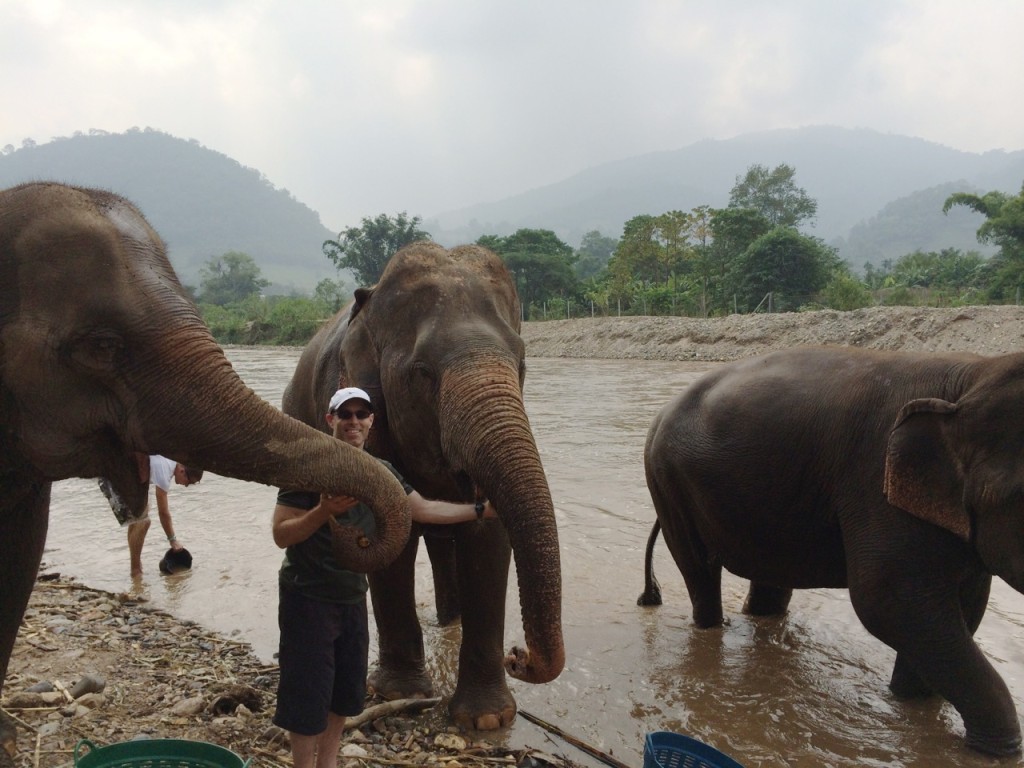 We then went for another walk around the park, where we met the four-month old elephant, who was precious and tiny (at least, tiny as elephants go — as vehicles go she’d be a Smart Car). We were warned not to get too close to the baby because she is prone to playfully jumping up on people, which is adorable when it’s a schnauzer puppy and less adorable when the baby is the size of a major appliance. The baby’s family group and another family group were hanging out together, and there was a bit of a tete-a-tete between two females who both apparently wanted to spend time with the baby. This seems to be a running theme here in Thailand. 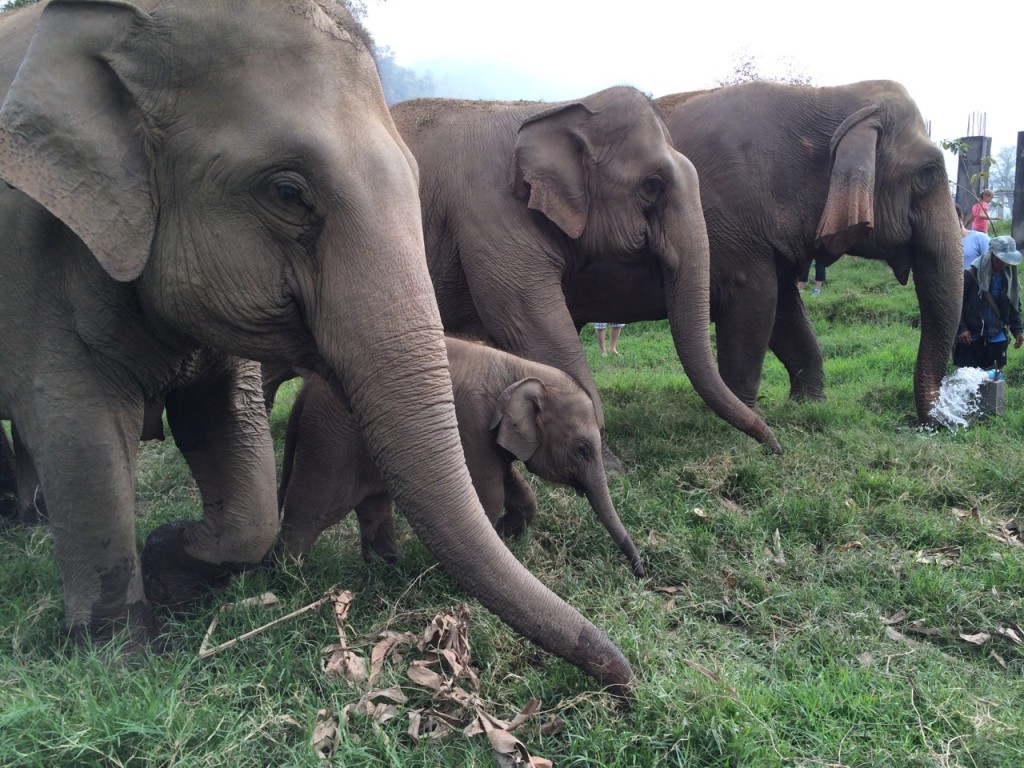 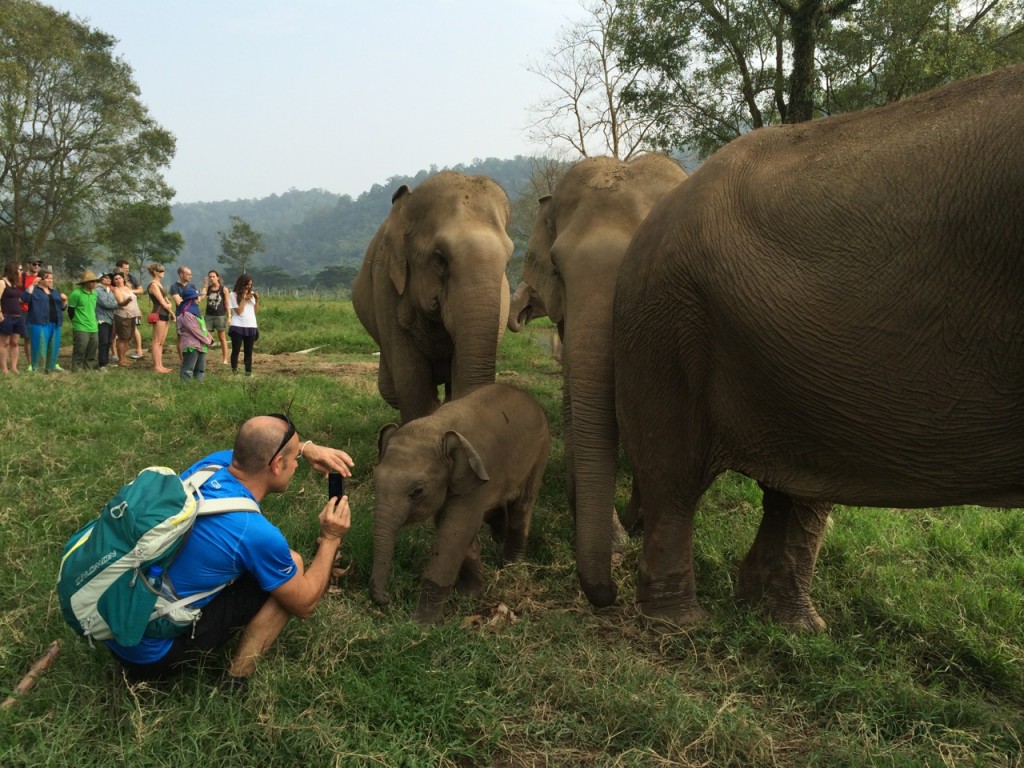 On the way back to the main building we stopped off at the elephant salon, where one of the elephants was getting a pedicure. Seriously. The elephant happily had its front foot up on a platform and seemed to be enjoying the toenail trimming and buffing. Elephants have very sensitive feet and in the wild can sense tiny vibrations from the ground. On the other hand, in the wild they can’t get their cuticles planed by a guy with a two-foot emery board.

Back at the main building we had one more elephant feeding and then it was time to leave. I gave the nearest elephant one last hug around the trunk and we piled into the van for home. On the way back we passed by several elephant camps where lines of elephants were slowly parading tourists around two-by-two on hard platforms that were strapped to their backs. It made me glad I took the tour that I did. But if Justin Bieber calls I will totally rap on his next album. 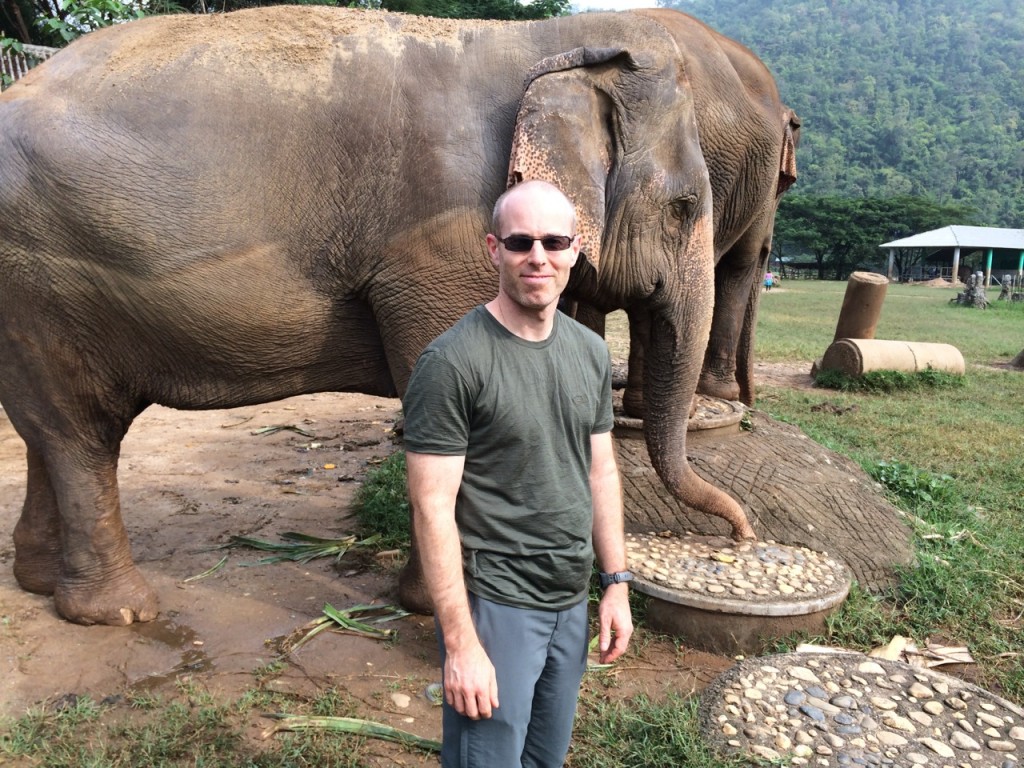 [Reminder: You can click on any photo in my blog for a much bigger version. In case you didn’t know how to operate the internet.]

4 responses to “Partying with Pachyderms”