Hamming It Up in Barrio Gotico

By totally random coincidence, my brother and sister-in-law are in Barcelona at the same time as me. Well, maybe not that random, considering that I’ve been systematically stalking them since my company moved its headquarters to their hometown (Boulder), allowing me to randomly show up on their doorstep 4-6 times per year. At this point they probably check under the bed every night just to make sure I’m not there. 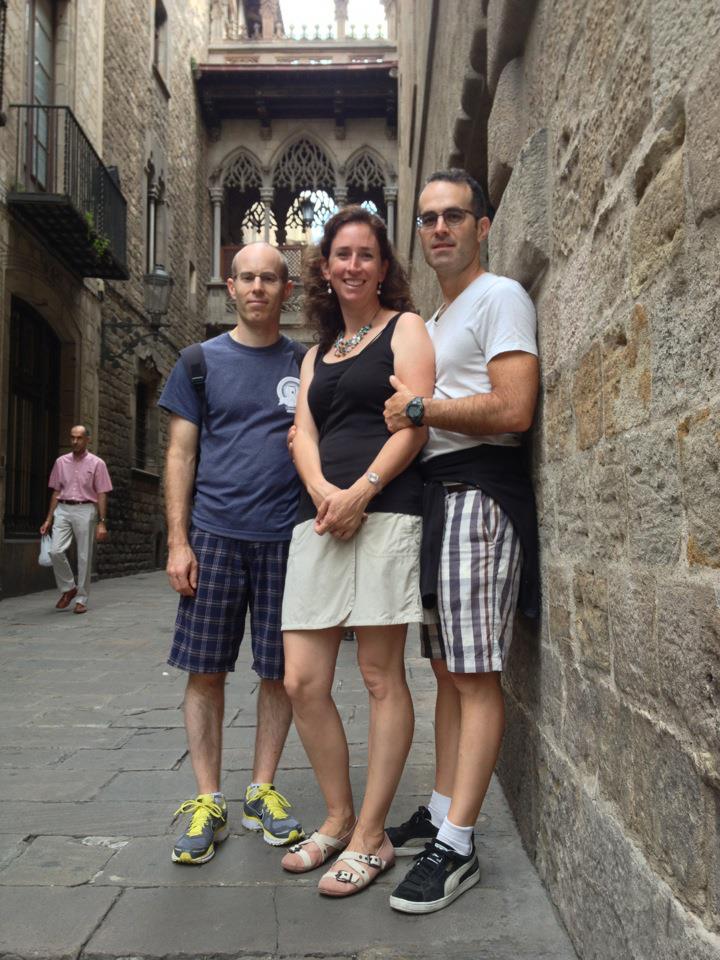 Anyway, my brother’s company paid for him to come to Barcelona to do a triathlon (yes, they’re hiring), so yesterday we met up at La Boqueria, a fancy open-air market off Las Ramblas, which is the long street through old town that leads from the heart of Barcelona down to the sea.

I took the metro (subway) to meet them. Barcelona has a very, very efficient metro system that runs all over the city, with most trains coming every four minutes. It’s easy to ride, well-marked and crowded. Unlike most subway systems in the US, each line runs on a completely different set of tracks, so when you change lines in a station it involves a long walk up several flights of stairs, down long corridors, up more stairs, down stairs, around several corners and through more passageways before you get to the next train. I am not exaggerating when I say that when riding to meet my brother I spent more time walking in the subway than actually riding the subway in the subway. It’s possible that they don’t even have any trains and this whole thing is just an elaborate ruse to get you to walk around town entirely underground. 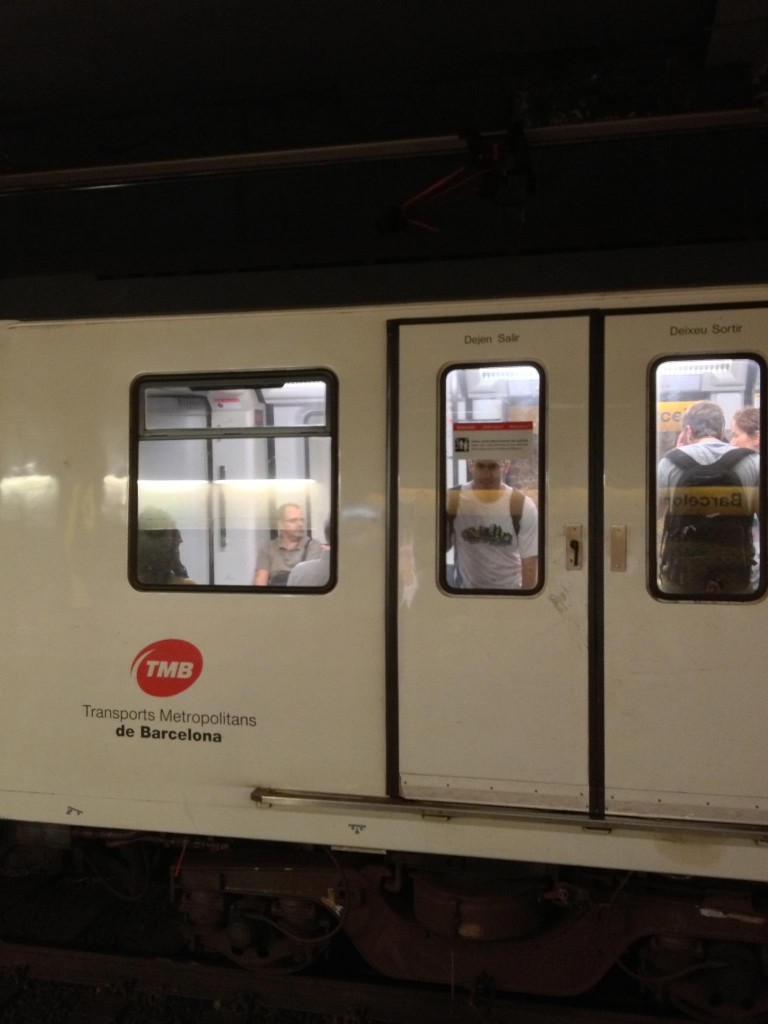 The upside to the metro system is it’s super fast to get anywhere in town. The downside is that when I come out of the metro I am completely turned around and have zero idea which direction I’m facing. When heading into Barrio Gotico, the old town of Barcelona which is known for being a maze of twisty streets, this is a recipe for getting lost. 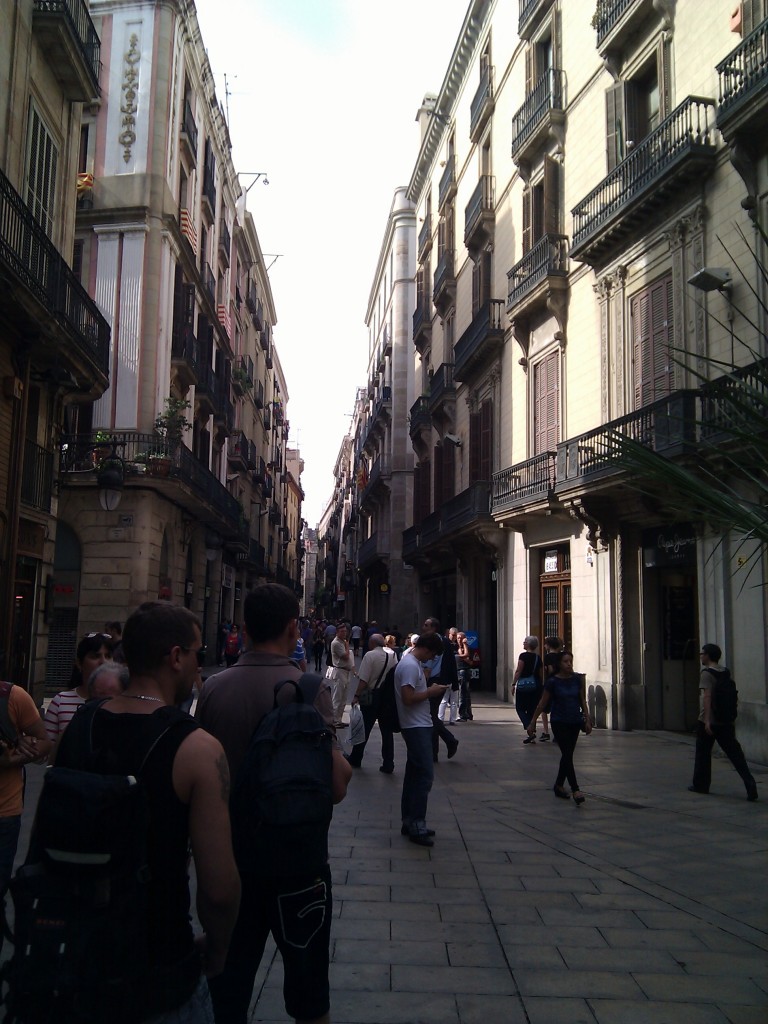 It took another two tries to finally reach Las Ramblas, and when I got there I had to walk in both directions before I finally found La Boqueria. It doesn’t help that Barcelona has enough tall buildings bracketing the streets that there aren’t any landmarks you can see to help you figure out directions. If you could see, say, a mountain, it would help immeasurably. Apparently the Spaniards are just good navigators (see: Christopher Columbus). If I’d set out with the Niña the Pinta and the Santa Maria we would have driven in circles for three hours until finally running through the plate glass window of a local Starbucks (which in Spain is pronounced “Starbucks”).

Meanwhile, the market … it was amazing. Meat markets, candy, the most spectacular fruits and vegetables, tapas, nuts, spices, seafood. And, of course, ham. 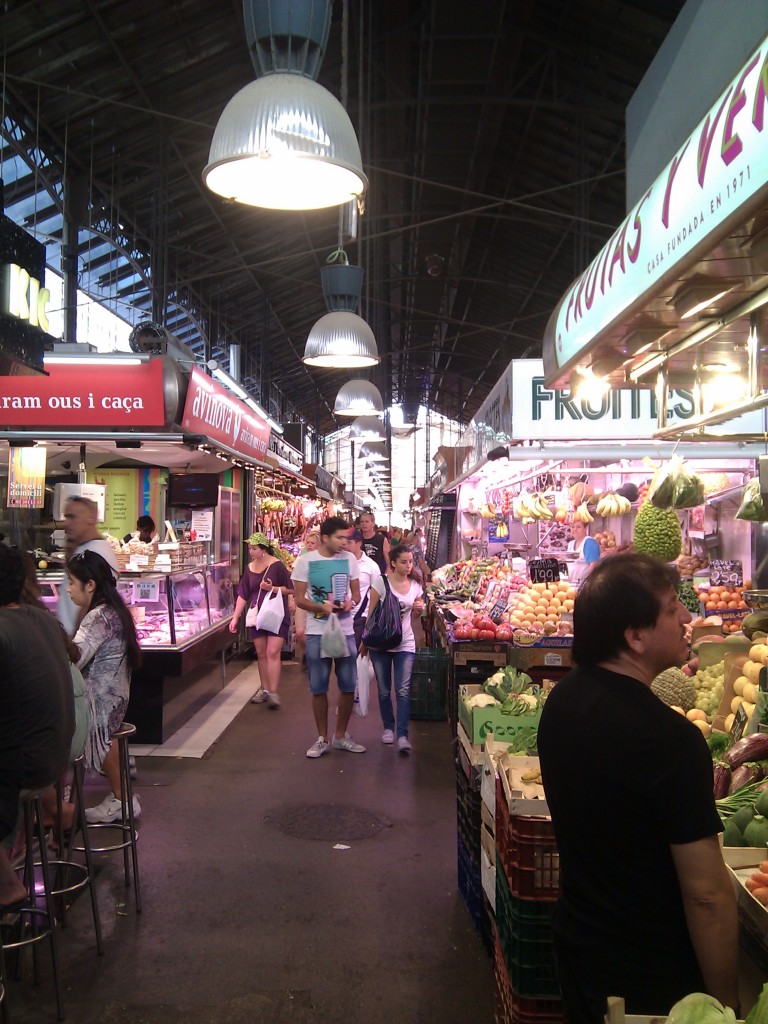 Jamon iberico is a national passion here. This is not the rubbery, pineapple-covered monstrosity served at your grandmother’s house on Thanksgiving, but dark, thinly-sliced chewy, spicy cured pieces of goodness. There is a ham store on every corner, and they proudly display their wares with entire legs of ham hanging in the window, with the hoof still proudly attached. I’m not sure how the attached hoof is a selling point; it’s not like when I buy a rump roast I want two cheeks and an anus for veracity.

They slice the ham to order, and also can serve up ham-on-a-stick, ham-in-a-carton or ham-in-a-paper-cone. The ham runs from standard quality up to “you-might-want-to-mortgage-your-house” quality. Also, it’s really delicious. I’ve had several different hams, as well as salami on a stick. If you need your 2 a.m. ham fix, Barcelona has got you covered. 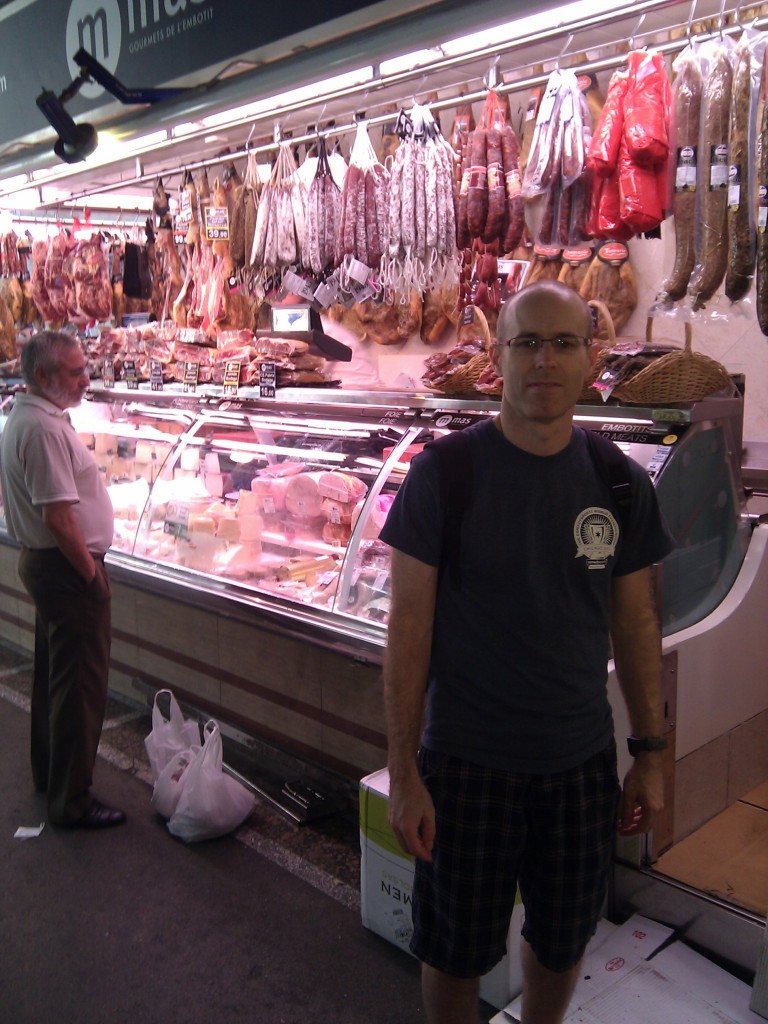 You can also get your fix of “Things that look like props from the movie Saw 2“: Skinned rabbits, skinned sheep heads (eyes intact), giant beef tongues, Miles of Tripe™ and various sea creatures that, if you encountered them while snorkeling, would cause you to scream and move to Iowa. The meat counters are not for the weak of stomach.

After exploring La Boqueria, we set out to do some window shopping in Barrio Gotico. It was hard to focus on the merchandise with all the spectacular architecture getting in the way. The area has impossibly old and beautiful buildings, crammed up right next to each other with narrow streets running every which way. Plus every once in a while you stumble out onto a plaza that has a church which is so dramatic it makes your knees weak. 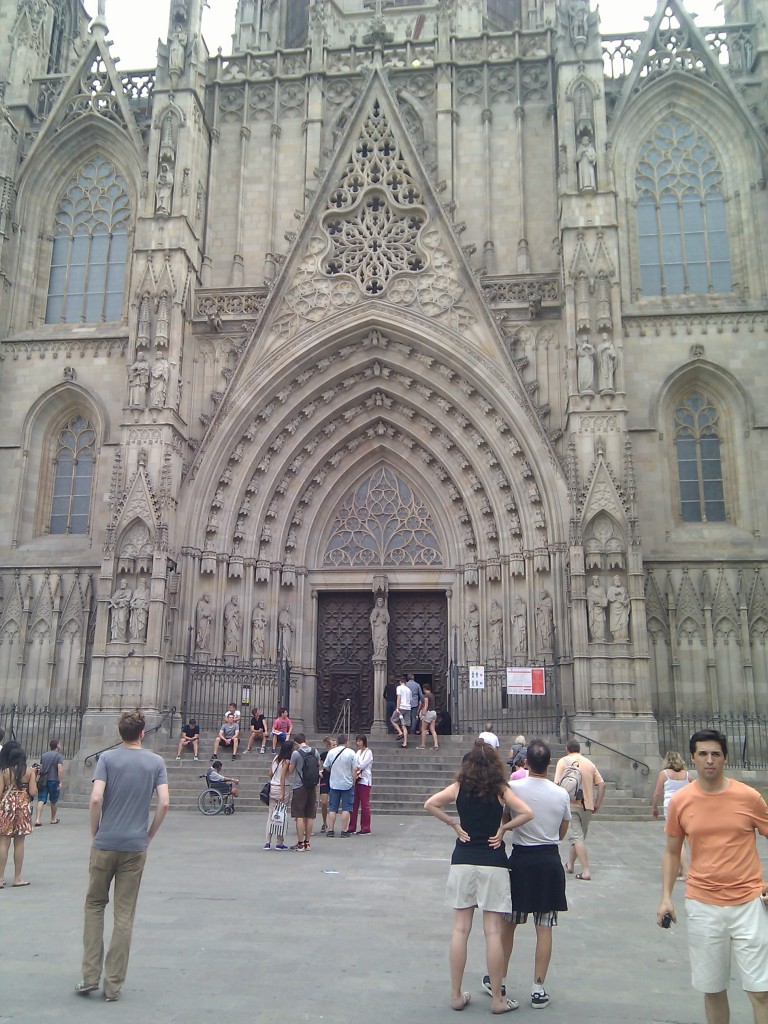 Barcelona also appears to the lead the universe in off-color t-shirts. If Mom and Dad went to Vegas and all I got was this lousy t-shirt is too tame for you, they have an increasingly offensive repertoire of t-shirts suggesting other things that Mom and Dad were doing on their vacation. Suffice it to say that there were a number of t-shirts which, while possibly reflective of the tastes or opinions of my girlfriend, are not something she would wear out in public.

We also decided that men hate shopping so much that the average guy who buys a pair of pants that are too big would find it easier just to put on 30 pounds than to go back and return it to the store.

After walking for what felt like hours (full disclosure: it was hours) we called it time for siesta when our legs were tired.

I hauled back to the apartment for grocery shopping and to get some work done in the evening. I’m still at work while I’m here, but with the nine hour time difference I’m doing most of my work in the evenings when everyone back in the USA is in the office.

I’m also still completely whacked out on my sleeping schedule. I’ve gotten one solid night of sleep, bracketed around nights of 2 and 1.5 hours, plus the occasional nap. I expect that I’ll get into a normal sleeping schedule just around when it’s time to return to the Portland time zone and start this routine all over again. I’m bringing a cone of ham for the long nights of insomnia.

One response to “Hamming It Up in Barrio Gotico”