Part of the fun of world traveling is to “Expect the unexpected,” which is one reason they never tell you beforehand that your airplane is going to crash into a mountain. Although if they did, I’d spend way more time choosing a seat near someone who looked delicious.

Anyway, after a day and a half of tepid Internet connectivity in San José we were not wholly surprised to receive a note slipped under our door on Tuesday night that said there would be no water from 7 a.m. to 4 p.m. the next day due to water shortages. Based on my previous experiences in Central America, I would not have been completely surprised if they had announced oxygen rationing. We dutifully took showers on Tuesday night to prepare for our day without water.

On Wednesday morning we awoke to discover that the water was still flowing. We were less pleased to discover that our B&B hosts had received some misinformation and it was electricity that was to be shut off all day instead of water. It wasn’t quite clear if it was rationing, a worker’s strike, or if the city electricians had been eaten in a tragic plane crash. The bottom line is that there was no power (and thus no Internet) for the rest of the day. We took this as an omen, canceled our meetings via my cell phone, and went sightseeing.

We headed out to visit nearby Volcán Poás, which, like me in the Costa Rican heat, is semi-active. “Nearby,” might be a bit of a misnomer, because “map distance” and “actual time to drive there” are vastly different values in Costa Rica. For instance, Google Maps pegged the trip at 38 minutes, which would probably be true if you were traveling by spaceship. By car it took close to two hours. This is because Google Maps does not account for the following variables:

Eventually we reached the top of the volcano, where we parked the car and hiked a quarter mile to an overlook above the crater. The previous day the volcano had experienced its strongest eruption of the year, spewing gas, smoke and ash into the sky, so there were news crews napping nearby in case Poás decided to blow again. It did not, but it did have a steady stream of steam and smoke pouring from the hot lake in the crater. Lacking any virgins to throw in, we just took pictures and elbowed French people out of the way. 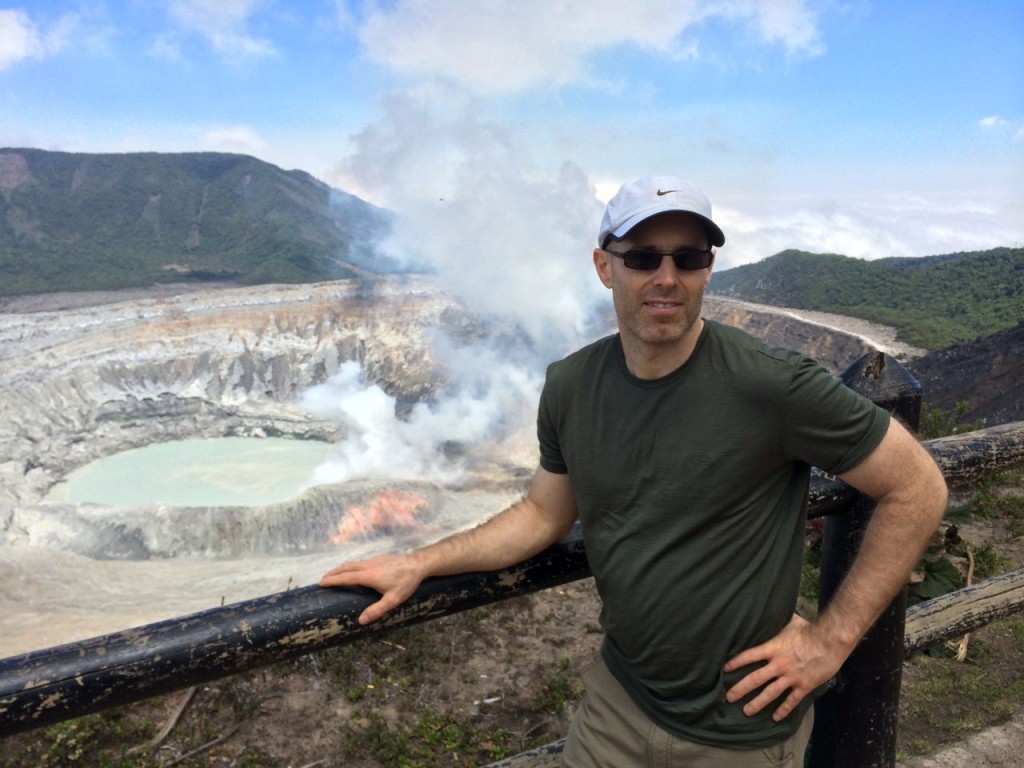 After viewing the raw destructive power of the earth, we then took a 2.5 kilometer (1.3 gallon) hike through the cloud forest and experienced the raw destructive power of 8,500-foot altitude on our lungs. We huffed and puffed and wheezed our way past a pretty lake and through beautiful trees, climbing steeply through the jungle foliage and then descending on the way back to the car. I’m sure this is exactly what it must feel like to climb Mt. Everest, and I would have given anything for a Sherpa to carry my fanny pack.

On the drive back down the mountain we were famished, so we stopped for lunch at a small Costa Rican restaurant and had the “comida tipica” dish of chicken with french fries. The restaurant had Christian quotes hung on the wall and plastered to the menu, the gist of which was “Don’t trust Google Maps on your way to Bethlehem.” By the time we got back to Casa Primo the power was back on and the Internet was screaming along at the speed of continental drift, so we worked until bedtime and then slept after Hadas engaged in a lusty heavy petting session with the resident Bichon Frise.

Thursday we checked out of the B&B while I examined Hadas’ suitcase to make sure she hadn’t smuggled the Bichon Frise in a side pocket. We headed out for the drive to the Caribbean coast and the small town of Cahuita. Being prepared, I had not only consulted Google Maps, but also many other web sites for directions and driving time estimates, which disturbingly ranged from 2.5 to 6 hours. That seemed like a rather wide range unless we were going to be detouring through Iowa.

Nor surprisingly, the first hour of our trip was spent going the 11 miles from our B&B to the highway, as we became horribly lost, disoriented and confused. After an unplanned journey through the heart of San Jose, several zigs, many zags and a couple of false starts, Hadas finally managed to navigate us onto the highway toward the coast. Keep in mind, we were attempting to navigate from the largest highway in Costa Rica to the second largest highway in Costa Rica, two roads THAT INTERSECT, and we couldn’t do it without getting lost.

The drive to Cahuita took about four hours, primarily because we spent most of it behind semi-trucks doing 30 kph through the mountains. As is traditional, I spiraled into frustration and road rage until Hadas gently suggested that she should take over driving, at which point I spiraled into screaming “Oh my God!” every time she pulled out into oncoming traffic to pass a semi. It occurred to me about three hours into the trip that I hate driving. There’s a reason I typically pick vacation destinations based on the number of subway lines they have.

Cahuita is a tiny town on the Caribbean coast, and by “town” I mean “one street.” We’re staying in the Coconut Love B&B, which sounds like something that they were trying to ban in Arizona. The B&B is currently being run by an older couple with charming accents who — thanks to my Linguistics degree — I immediately pegged as being from The Netherlands. (They’re from Hungary.) Like many Caribbean accommodations, our cottage is clean and spartan, but with all the comforts of home, if your home contains a billion tiny ants and a beetle that is currently on the blinds above my head with the words “Volkswagen” stenciled on its forehead. 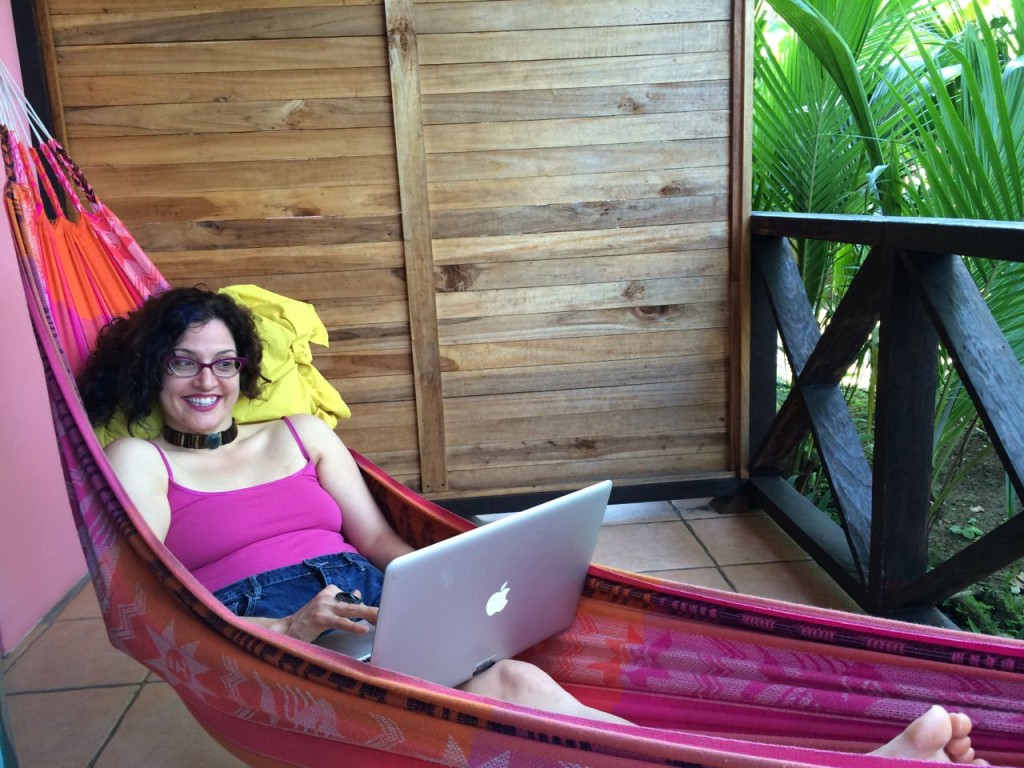 Yesterday we explored the entire town, which took about seven minutes. For dinner we had spicy meat-on-a-stick-wrapped-in-a-tortilla from a street vendor, which was delicious if not entirely the most convenient way to experience what amounted to a taco weapon. Thankfully, nobody was stabbed, although I think I ate about 50% tortilla and 50% napkin. So far everyone I’ve met in Costa Rica has complimented my Spanish, or at least that’s what I imagine they must be saying.

I’m not sure what it is, but chicks dig the sloths. Two weeks ago at a party, I watched Hadas and three female friends huddled around an iPad cooing and squealing at YouTube videos of sloths. Every time Hadas has even thought about sloths before this trip she’s let out a little squeal. I was pretty sure that she was going to explode when we actually saw sloths today.

We visited the Sloth Sanctuary, where they rescue and raise abandoned, injured and orphaned sloths. Within minutes of arrival we were face to face with a sloth in a basket and Hadas was making sounds like helium escaping from a weather balloon. I gotta admit, the sloths are pretty cute. Also, true to their name, pretty slothful. 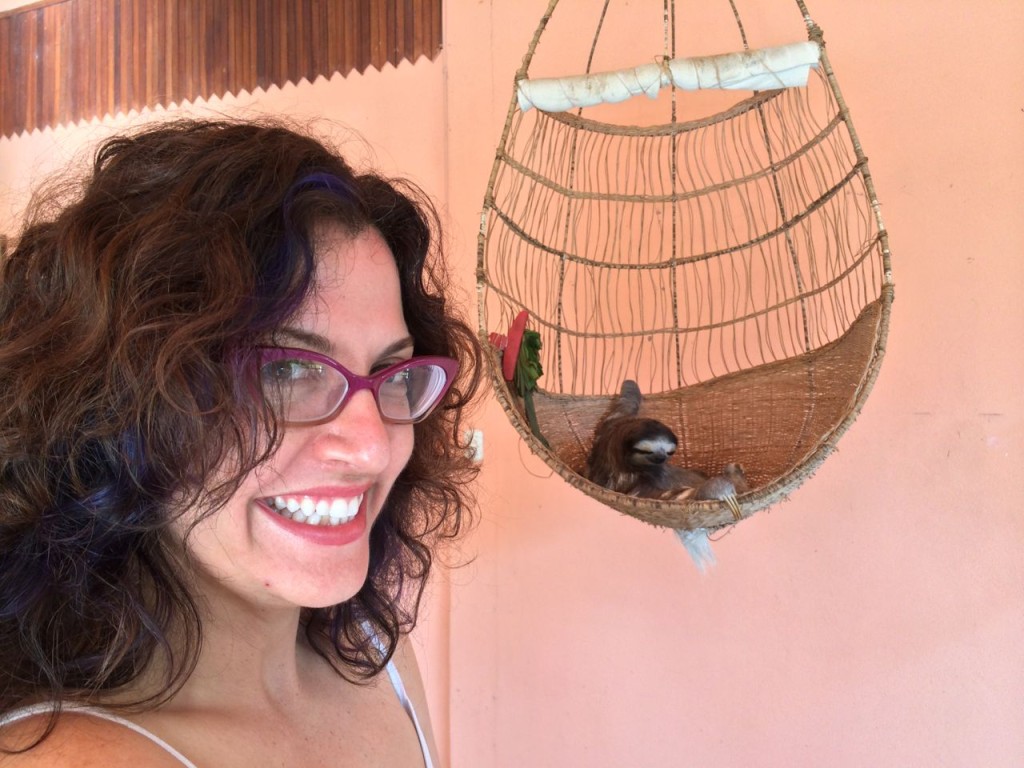 The first part of our tour was a canoe ride through the shallow river next to the Sloth Sanctuary. Our boatman was not the loquacious type, so it was a bit of a do-it-yourself tour. We had to ask him questions to get him to volunteer information. I felt like I was on an episode of Are You Smarter Than The Dude That’s Driving Your Sloth Boat? Along the way we saw bananas in their natural habitat, a pile of tiny bats sleeping under a hollow tree, huge expanses of bamboo, and … a wild sloth! It hung by its toes and scratched its face.

Squealing occurred. I finally remembered that I had binoculars (this is day five) and we used them for the first time. I attempted to take a picture of the sloth and realized that as a photographer I am more Gomez Addams than Ansel Adams. The boatman recounted a wonderful, detailed anecdote, that went something like “Sí.”

Back on shore we met baby sloths and watched them eat, which is as adorable as you are probably imagining right now. Then we met some adult sloths who were also adorable, but larger. I continued to take incompetent photos, but luckily Hadas took both competent photos and video, the latter of which contains the soundtrack of squealing. 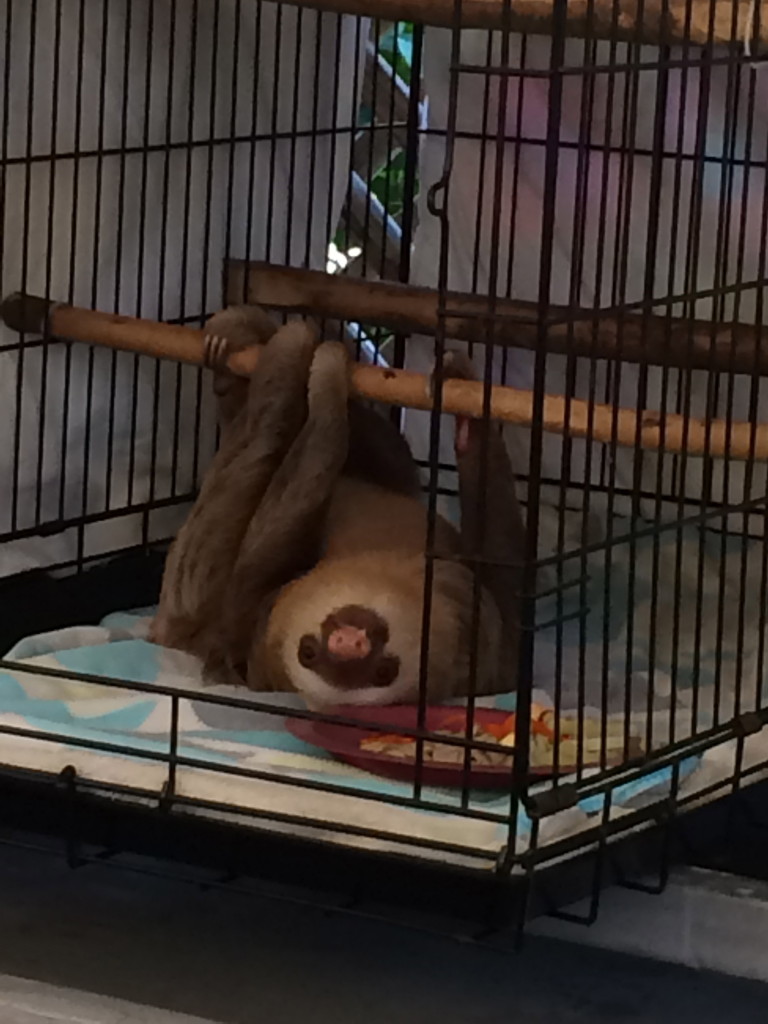 After the Sloth Sanctuary we drove five miles past Cahuita to the nearest supermercardo, which was more mercado than super. It appeared to have mostly hair care products and corn oil. Somehow, using only the scant cooking utensils in our cottage, Hadas was able to cobble together a delicious lunch (deep-fried shampoo). Actually it was Caribbean-spiced chicken and sausage on rice. Yum!

Then following a long workday, a nap (me), a run (Hadas) and a second lunch of eggs and tortillas, we headed out to the oceanside Sobre Las Olas restaurant, where we sat outside overlooking the pounding surf and enjoyed a lobster and chicken dinner by candlelight beneath the palm trees. It was one of the most lovely meals of my life.

We lingered for a few sublime hours, listening to the ocean waves, until it was time to head back to the cottage to let the Bichon Frise out of Hadas’s suitcase.

[Note: Hadas and I are writing he-said, she-said blogs about the trip. I’m the he-said. You can read her blog at klutzinmypants.wordpress.com.]