We’re 30 minutes into an 11-hour flight to Tokyo and they’ve already shut down the entertainment system for a 15-minute “hard reboot.” If they can’t get Two and a Half Men to play consistently I have some serious questions about whether this plane will make it to Japan.

Nonetheless I’m in a chipper mood because I’m ON MY WAY TO THAILAND. It’s day one of my annual winter trip away from rainy Portland (currently masquerading as snowy Portland) and I couldn’t be more excited. The entertainment system failure notwithstanding, so far Delta is killing it with a hilarious new safety video that seems to have been inspired by the movie Airplane. Sight gags galore plus a cameo by Alex Trebek. What’s not to like?

I’m also excited because I’ve upgraded my travel repertoire with the following improvements:

It reduced the loud roar of the engines to a soft purr and means I can listen to the in-flight entertainment (when operating) at a comfortable volume. There is also a commercial for the very brand of headset I purchased, playing before movies on the entertainment system (when operating), so I feel like a smug shopper.

It looks like an inflatable giraffe bladder, but during the second leg of this flight from Tokyo to Bangkok I intend to sleep like teenager.

In my never-ending quest to pack lighter, I bought a smaller version of my already-small carry-on backpack. I’m going to Southeast Asia — it’s not like I need to bring bulky sweaters. My bag is ultra-light, except for the 35 pounds of food that I’m carrying with me just in case they do not offer food in Thailand. Luckily, I probably will have eaten all of it by the time they serve dinner on the plane. Hadas says I have a luggage fetish. It is not a fetish. I merely appreciate a fine selection of quality bags and enjoy choosing the perfect one for each trip based on the destination. 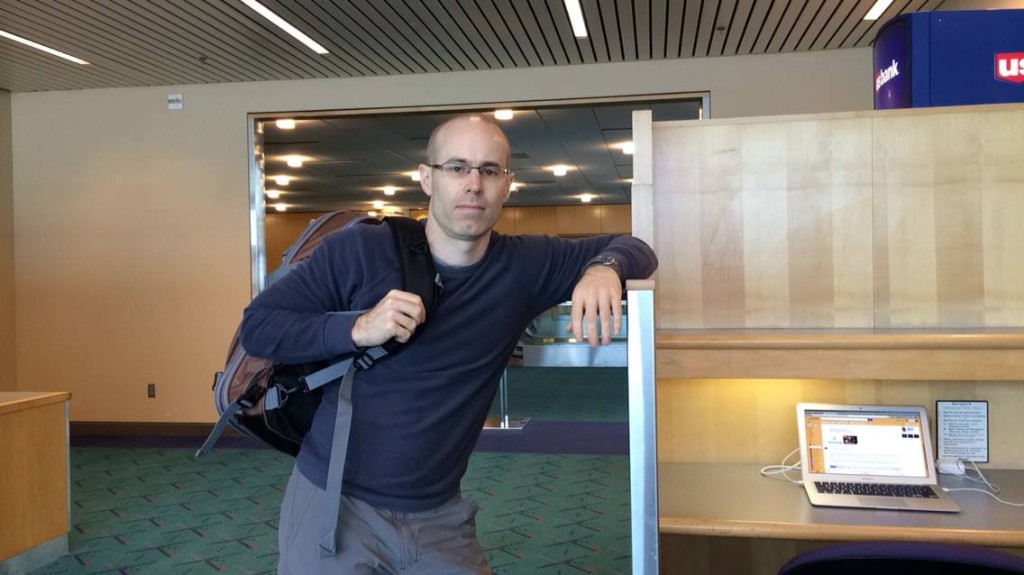 On my last trip I was sitting in my hotel room with nothing to do, and it occurred to me that I was probably a Frequent Traveler, seeing as how I was sitting in a hotel room in the midst of a frequent trip. So I went online and signed up for the US Customs and Border Control’s Global Entry program. After submitting a lengthy online application in which I listed my employment, residence and travel history, and coughed up $100, I was conditionally approved in late November. And thanks to a stroke of luck I was able to get in for my in-person interview this past Monday. The interview, with a cheerful Border Control officer at the Portland Airport, was mainly an excuse to give me a pamphlet about the program and take my fingerprints. Now a proud Global Entry member, I get two benefits: One, I am eligible for TSA PreCheck, which means at the airport this morning I got to to through the special line where you can leave your shoes on, your laptop and liquids in your bag, and just generally speed through security like it’s 1999. And two, when I return to the US I can fly (figuratively) through customs and immigration at a Global Entry kiosk instead of waiting in line with the other poor saps from the plane. So far TSA PreCheck was a big win, and I’ll report back on Global Entry when I globally re-enter in late December.

So thus properly outfitted for a trip to Thailand, I thought I should address the most frequently asked question I’ve gotten, which is:

“Thailand? By yourself? Are you crazy? Aren’t they having riots?”

It’s true that they’re having some protests, but the tear gassing is apparently localized to some very specific areas of Bangkok, and I’m only going to be there for a day and a half before heading north, so I expect it’ll be a light tear gassing at most. Besides, last I heard the protestors and the government had called a time out from hostilities to celebrate the King’s birthday.

Regardless, the chances of me actually getting to Bangkok are still dubious at best. Even ignoring the question of whether this plane is airworthy, there’s the small matter of China and Japan being locked into a tete-a-tete over some disputed islands in between the two nations, so apparently our pilot has to radio Beijing when we’re flying over the disputed islands to say “Hey y’all, we’re just a friendly Delta plane with a balky entertainment system — please let us through.”

And if that wasn’t tricky enough, it was dicey as to whether I would even make it to the flight this morning since Portland suddenly decided to turn into the second coming of Siberia and the roads threatened to make a 15-minute drive to the airport into an all-morning affair. Whoever said getting there is half the fun probably needs to evaluate their definition of fun.

Needless to say I’m expecting to experience a world of culture shock upon landing in Thailand. With a year to prepare for this trip I’ve learned a good 15 words of Thai, ten of which are the numbers one to ten (feel free to quiz me). I plan to spend a fair amount of time pointing at food and hoping it is not roast beetle knees.

All righty, the entertainment system is back up and Cougar Town is not going to watch itself. More details to follow if we make it. 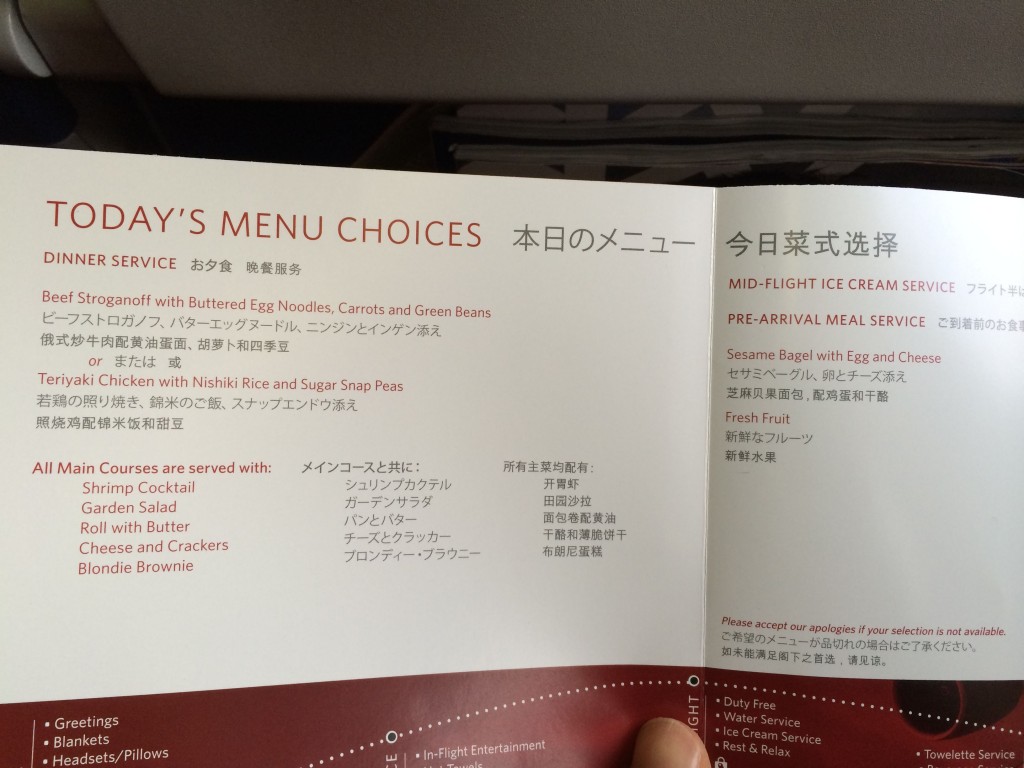 Somehow I missed out on Saturday with the time difference. Seriously, I left home Friday morning and woke up on Bangkok on Sunday. If anyone finds my Saturday, please mail it to me.

So … I made it. The entertainment system sort of worked, except that it would show you a different movie than the one you selected. This probably came as a surprise to the parents who were trying to cue up My Little Pony for their kids and got Showgirls. I watched Pain and Gain, and Now You See Me on in-flight entertainment roulette.

Nonetheless, the rest of my travel day was pretty smooth, and I do mean day. The sun stayed up for the entire flight to Tokyo since we were flying directly west. A quick two hour layover in Tokyo and then an easy seven hour flight to Bangkok during which I mostly slept and here I am!

Passing through immigration in the Bangkok airport was as easy as any country I’ve ever been to. I was through the line in less than 10 minutes with my new passport stamp. I grabbed 9900 Baht from an ATM (still figuring out the conversion rate, but I think it’s somewhere between five dollars and my life savings) and caught a taxi to the Silom City Hotel.

Extremely notable fact: THEY DRIVE ON THE WRONG SIDE OF THE ROAD HERE!!! AAAAAAAAAAAGH! That made the taxi ride a bit of an adventure, even at 1 a.m. It also means that the moving walkways in the airport and the escalators are also on the wrong side, and I can neither confirm nor deny that I spent five minutes walking around level two of the airport trying to figure out how to get down to level one. In the process, I got stopped by security and asked to show my passport, because apparently I looked suspicious trying to figure out how to ride an escalator. Quality tourism. 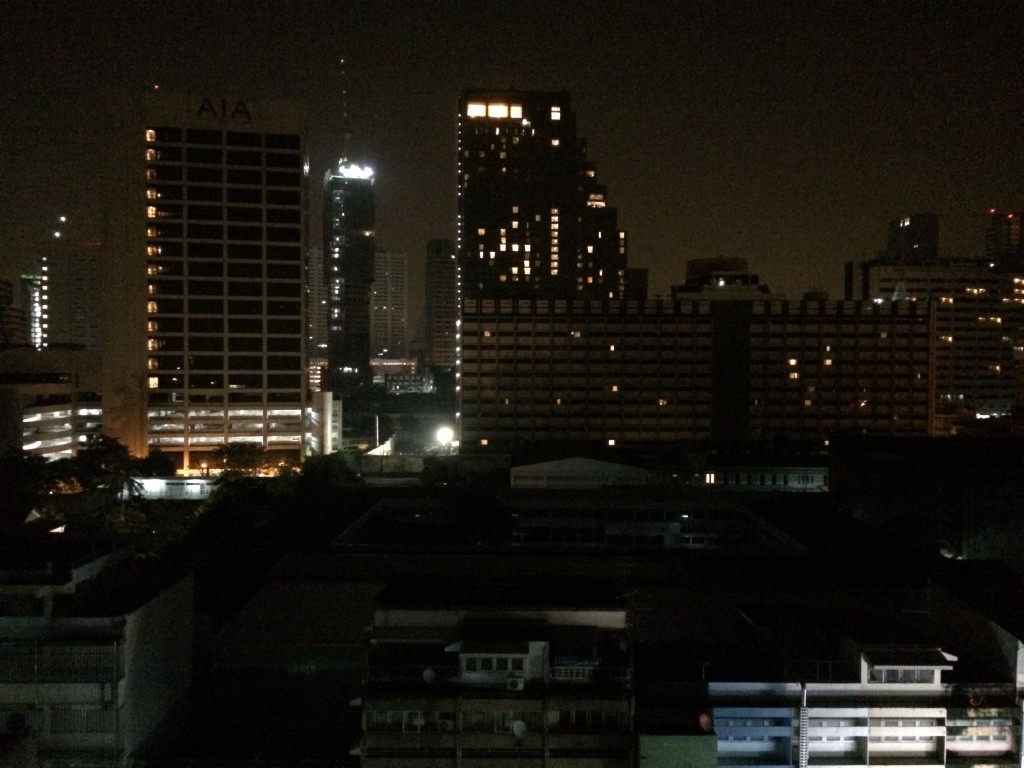