Until I borked my shoulder playing hockey a year and a half ago I was an enthusiastic Crossfitter. For those who are unfamiliar, Crossfit is a workout program that combines weightlifting and aerobic exercise in a constantly-changing regimen of short-but-very-intense workouts. It’s a program favored by firefighters, police offers, military personnel and others whose day-to-day jobs feature intense bursts of life-or-death physical activity. So it’s really a natural fit for me as a software product manager.

Crossfit is also a ton of fun (if your idea of fun is “torn blisters on your hands and gasping for air like a beached sturgeon”) and the place I work out at (Crossfit Epiphany) has a great and supportive community that helps people get into wicked amazing shape. Crossfitters become slightly obsessed and talk about Crossfit with the same kind of wide-eyed, proselytizing tone you usually hear from the folks who ring your doorbell at 3 p.m. to hand out glossy, four-color pamphlets about the rapture.

So after a long rehab, I’ve been testing out my shoulder on some home workouts and getting ready to head back to Crossfit when returning to Portland. While surfing the Internet for “Things to do in Buenos Aires that do not involve getting stabbed in a soccer riot” I stumbled across Boot Camp Buenos Aires, which looked like a fun way to continue to work my way into shape.

It may give you an idea how badass Crossfitters are that the phrase “boot camp” sounded kind of pansy. To mere mortals, the phrase “boot camp” is designed to conjure up pictures of endless marches with 60-pound packs and pushups in the mud, while a drill sergeant shouts profanity from above. I figured it would be a pretty easy workout — maybe some light toning and deep knee bends. The meeting point was about 1.3 miles from my apartment, so I decided to warm up with a run over there just to make sure that I would get enough exercise.

We met at Plaza Italia, underneath the statue of Giuseppe Garibaldi, an Italian military leader who led the Italian Legion in the Uruguayan Civil War. They don’t need much of an excuse to put up a statue here. The boot camp leader was Carolyn, from Indiana by way of Chicago. Also working out that day were a gentleman from Holland, two local women and another American gal. I did not manage to remember anybody’s names because I was too busy feeling cocky about how much I was going to crush the workout.

I got my first introduction to the Buenos Aires kiss-on-the-right-cheek greeting, which is markedly different than the Spanish kiss-on-both-cheeks greeting that I had finally gotten used to in Barcelona. I bungled the procedure with such flair that the women immediately guessed that I was new in town. (For the record it’s right cheek only, no tongue.)

I also got my Spanish corrected, since Argentina uses the unique “Voseo” form of the familiar, thus tossing two years of college Spanish out the window as “Tú eres” becomes “Vos sos.” I remember this was mentioned in passing in one or more Spanish classes many years ago, but I filed it away in the “How likely is it that I am ever going to need to know THAT?!?” section of my brain. I imagine this is the same way that first-year medical students approach lectures on obscure tropical diseases — academically interesting, but probably not worth memorizing. 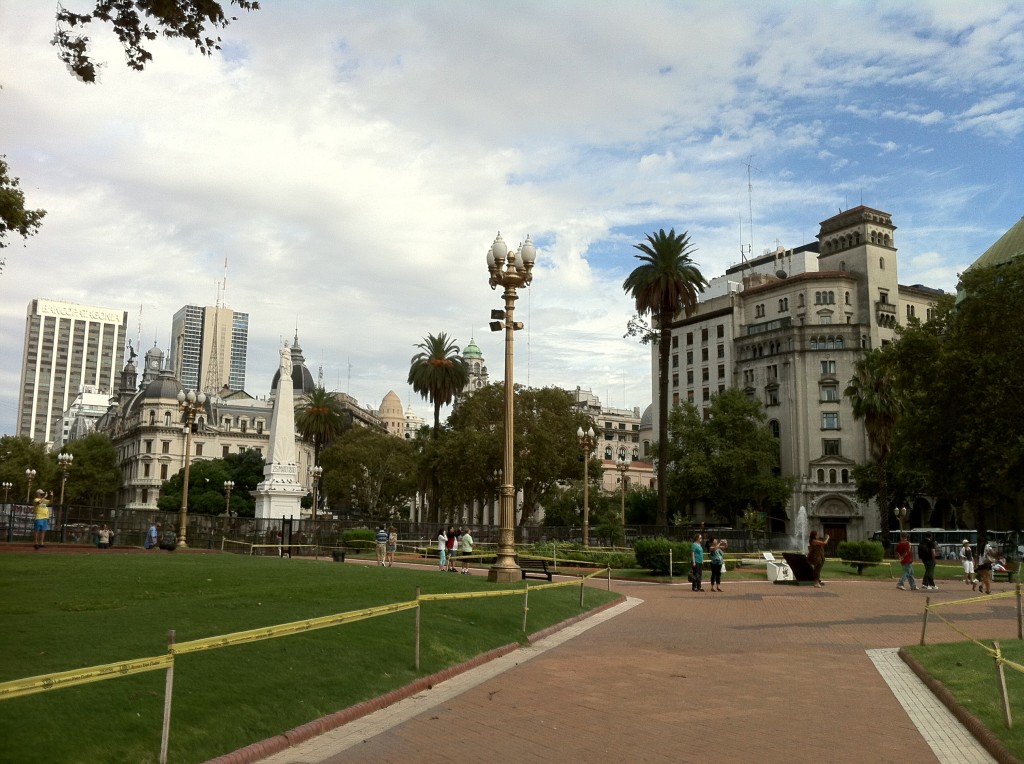 We jogged another half mile or so over to a nearby park, dropped our bags next to a statue of a deer (possibly a military hero deer, I dunno) and then Carolyn proceeded to kick our booties all over the campo for the next hour. There were burpies, squats, push-ups, runs, planks, lunges and a crazy pass-your-leg-through-a-lunge-so-you-look-like-a-breakdancer-in-a-car-accident maneuver. In between each set of exercises we jumped enough rope to rig a schooner. We topped it off with an all-out 400 meter sprint through the park, around another statue. Big thumbs up on the boot camp. I’ll be back as soon as I can walk again.

It was 8:30 p.m. when we finished, a lovely warm Buenos Aires evening. Hundreds of people were out cycling and running around the Palermo parks. I walked back to Plaza Italia (gingerly), past the unmistakably earthy smell of the BA city zoo. I caught the bus back home, as there was no way I was going to be able to jog for more than about 45 feet without collapsing.

After a shower I headed out to a Brazilian restaurant and refueled with a bowl of feijoada, a stew of beans, pork and sausage. While I was dining they kept picking up tables and moving them out onto the sidewalk, and by the time I was done eating I was sitting alone at a solitary table in the middle of the restaurant. I kept expecting Allen Funt to jump out from behind the Fanta cooler.

Half an hour later I had managed to carefully pick up the glass and sop up the balsamic vinegar, most of which had made a beeline for safety underneath the refrigerator. Remind me not to decry “Lack of blogworthy items” again.

Product I am least likely to purchase at the grocery store: 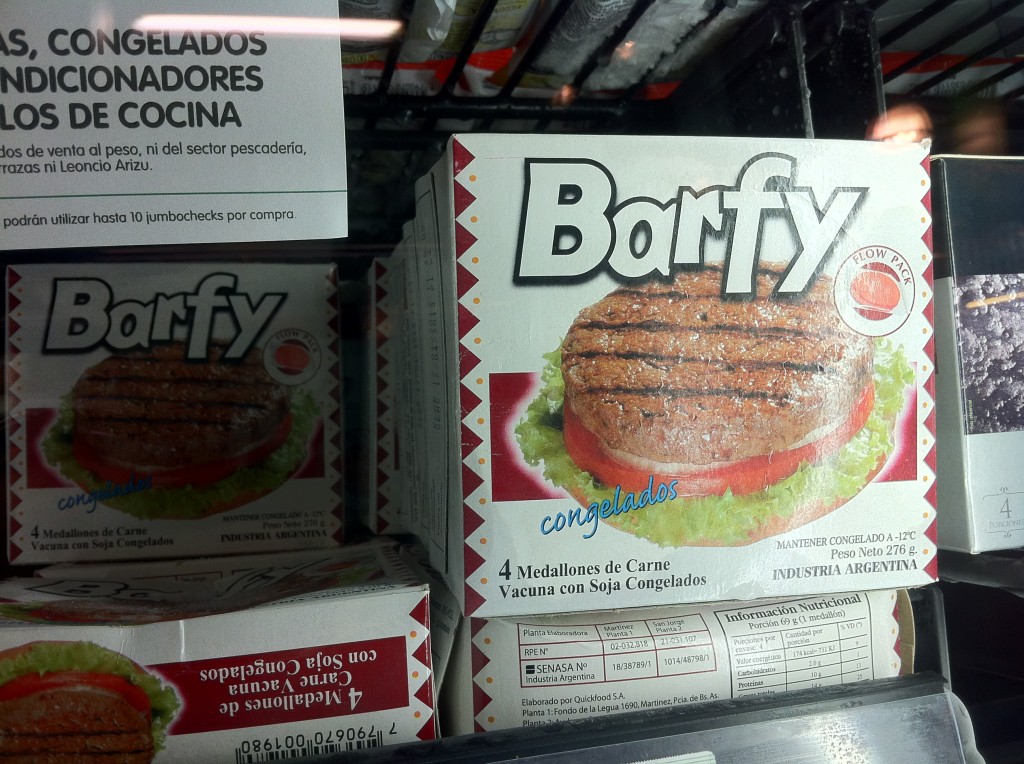 With my first full free weekend ahead of me, it was time to do some sightseeing! I mapped out the route to downtown Buenos Aires, which could either be entirely by bus or by bus + subway. Having seen the traffic here, I figured that subway would definitely be better, so I caught the bus to the subway station.

Just because you’re standing at a bus stop DOES NOT mean that the bus is going to stop for you. You have to wave the bus down to get it to stop. This is mostly practical — with over 150 different bus lines, any bus stop usually serves multiple routes, and it would be inefficient for the bus to have to stop just to see if the people standing there wanted to get on or not. So when the bus comes hurtling around a corner you have to step out into the street and wave your arm if you want it to come screeching to a halt in front of you.

In fact, the buses aren’t really big on stopping at all. Let’s just say that I’m getting pretty experienced at hopping off the bus while it’s stopped-ish.

I was pretty sure that my SUBE card (the magical electronic bus pass) would also work in the subway, so I spent 30 seconds waving it above, around and next to various parts of the entry gate before I watched someone else go through and figured out where to hold my card. This is what it must feel like to be in the first week of Charms class at Hogwarts. 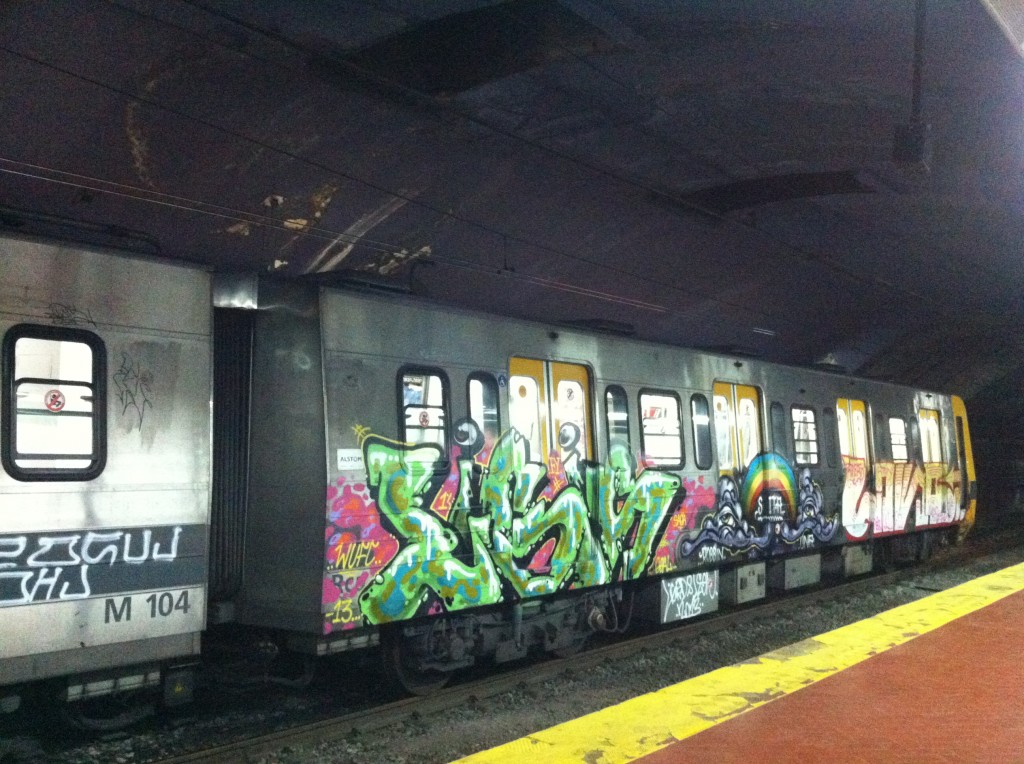 The subway took forever to arrive, and what it lacked in ambience it made up for in vendors hopping on and off the cars to sell confections, maps and other gewgaws. About 2/3 of the way to downtown we stopped at the Pueyrredón statin and there was an announcement made over the loudspeaker, which I couldn’t understand. Almost everyone got off the train. Since I didn’t know what was going on, I stayed on the train and after a few minutes the doors closed and we were on our way again.

Back in the direction we’d come from.

I’m still not exactly sure what happened, but due to construction or repairs or a drunk subway designer or the giant monster from the movie Cloverfield, I had to get out at the next station and cross over the tracks onto the other side to continue the journey to downtown. I’m still not clear how this all works.

Anyway, it took me 70 minutes to get downtown.

Once in the heart of Buenos Aires, I walked over to the Plaza del Mayo and enjoyed taking in the downtown architecture, which is a mix of Spanish, French and Latin American. It’s very striking. I saw Casa Rosada, which is the headquarters of Argentina’s executive branch. And about 100 tour buses, which were shuttling dazed Americans around the sights of the city. 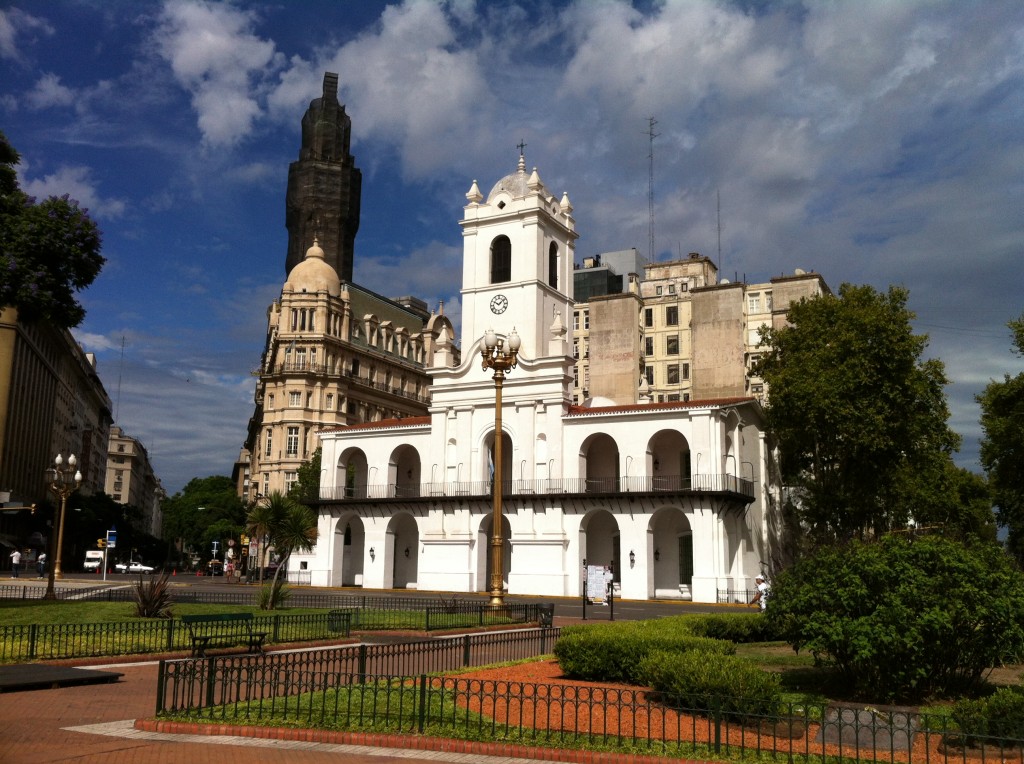 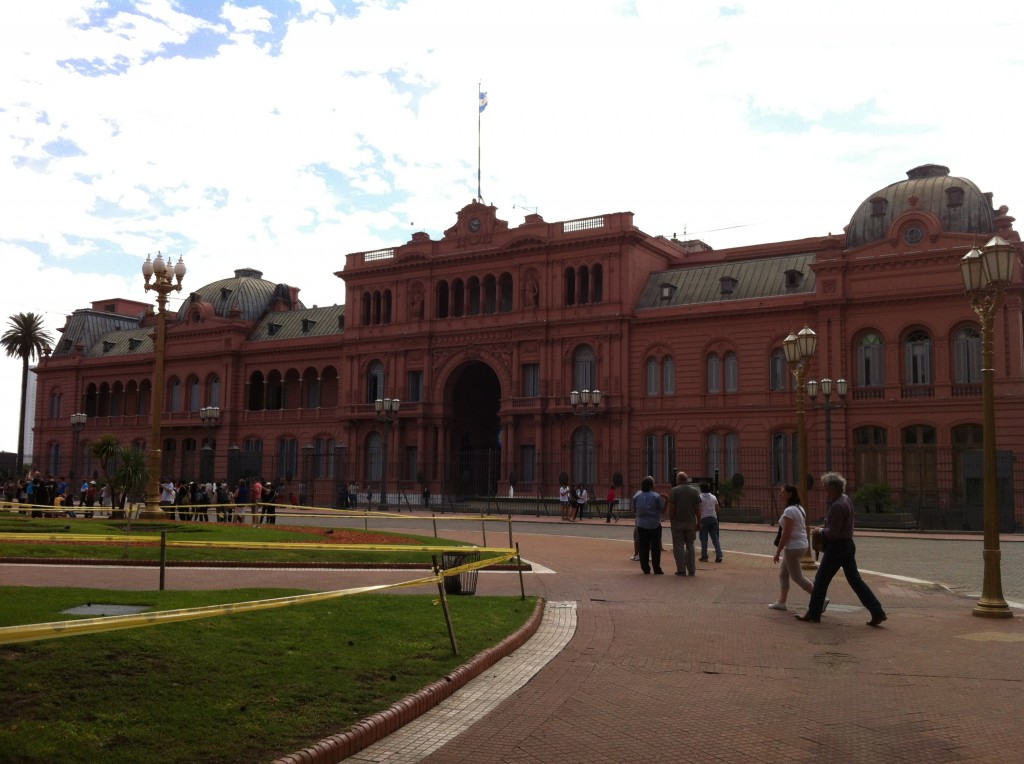 I stuck to the bus for my trip home and it only took about 35 minutes from downtown to my front door. I can report that Buenos Aires does not lack for McDonalds locations.

After a siesta I headed out on two more bus rides for a Yoga in the Park event. The same people who run Buenos Aires Boot Camp also run Buena Onda Yoga and they were having a fundraising event for Unión de los Pibes. I figured some yoga would be a good way to stretch out my bootcamped muscles and meet some people. The participants were mostly expats, including a gal who had a small dog that featured only one fewer than the standard number of eyes that are typically issued to dogs. I pet its good side.

We walked together while chatting, over a mile to the park, where we set out our blankets and mats and had a lovely yoga session in the fresh(ish) air. The only downside to outdoor yoga was the occasional ant bite on the toe, which is almost certainly going to give me some unpronounceable tropical disease that my doctor back home will not have paid attention to during her first year of medical school.

And then a gargantuan rhinoceros beetle walked between my feet while I was in a very vulnerable downward dog position.

Afterward we picnicked; I chatted with a gal who had quit her technical writing job at Red Hat to move to Buenos Aires for a year and write a novel. And also with Jess, the yoga teacher, a journalist who is stringing for the AP, among other things. Many writers here among the expat community. Food: yummy. 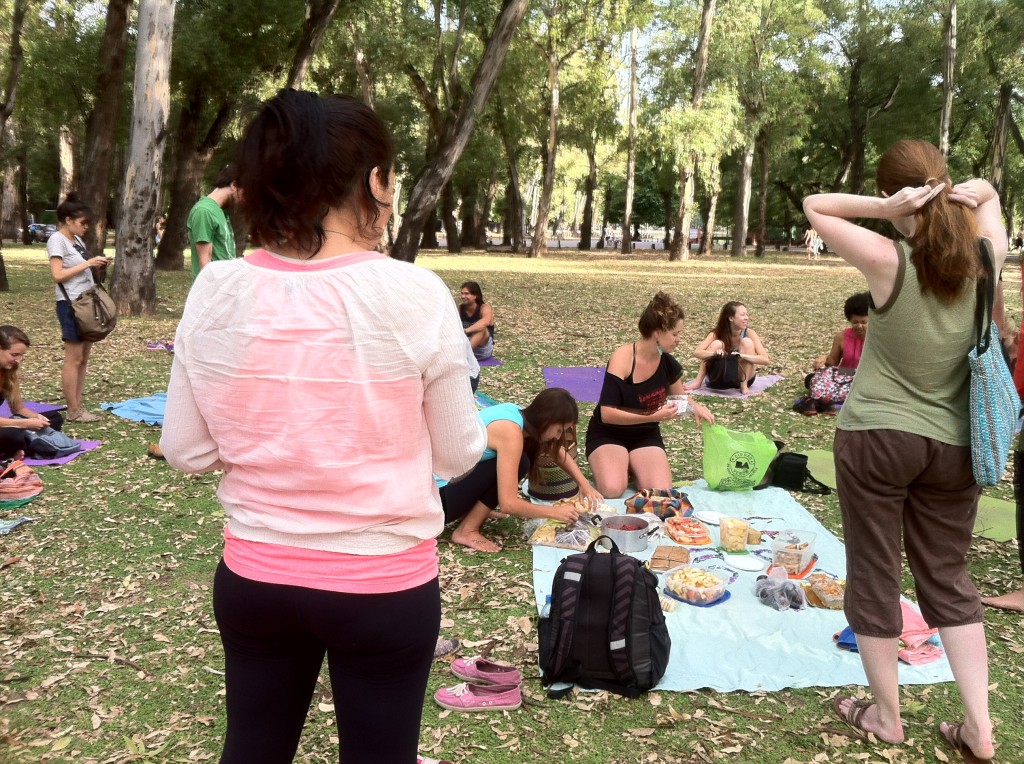 Following the picnic I walked, bused and walked some more back home, stopping along the way at the grocery store to pick up yet another bottle of balsamic vinegar. I’m expecting to get a call from the VISA fraud department any moment now to tell me that they’ve discovered a “suspicious pattern of usage” on my card, i.e. multiple purchases of balsamic vinegar in South America within a 24-hour period. I’m sure I’m going to have to provide some form of documentation. I hope I can remember my PIN.