In the lead-up to my trip, I approached the impending 10-hour Portland to Amsterdam flight with the same sense of doom that one might have when assigned to life imprisonment. It would be — by several hours — the longest flight I’d ever taken, and growing up the joke in Alaska was that Delta (Airlines) stood for Doesn’t Ever Leave The Airport.

Thus, I packed the following for the trip:

I was essentially prepared for any contingency, including flight delays, bad weather or a hijacker diverting the aircraft to Jupiter.

But from the moment I entered the Delta gate, replete with black-turtleneck-clad agents moving the passengers through check-in with typical Dutch efficiency — and looking like extras from a discarded SNL Sprockets sketch — Delta was the model of smooth, easy air travel.

The A330 Airbus was well appointed and shockingly new. They hadn’t even taken the price sticker off the cockpit window. I had chosen a window seat on the theory that I could lean my head against it (the window, not the seat) and sleep, and when I got to my row there were a pillow and blanket neatly stacked under the seat belt. WHAT?

There was an in-seat TV center with free on-demand entertainment, dozens of the very latest movies to choose from, plus audio channels and television. They announced that they would be serving three meals — lunch, an overnight snack, and breakfast, plus myriad visits from the drink cart and duty free shopping.

It was kind of like my usual flights on Southwest, in the sense that both airplanes have wings.

There’s no getting around it, a 10-hour flight is just a long time to sit in an airplane seat. Luckily, with my iPhone and a hastily-downloaded selection of new fall TV pilots offered up for free on iTunes I had literally hours (2.5) of entertainment.

FOX. Quirky doctor played by Mindy Kaling looks for love and career satisfaction while escaping the rapidly-deteriorating final season of The Office. She spends most of her time running barefoot from various hijinks directly into the hospital to deliver babies.

How long they spent coming up with a name for the show: 1.5 minutes.

Of note: No laugh track comedy. Has anyone ever thought of adding a cry track to TV dramas? I think that would be awesome. There’s my billion-dollar idea for the day. Go get rich.

CW. Quirky first-year resident played by Mamie Gummer (no, she’s white) deals with the cliquish foibles of working at a hospital. Spends most of her time giving herself voice-over pep talks and hanging out with a cast of people who all look like they should have gone into modeling instead of wasting time at medical school. If my hospital had this many good looking people I would spend most of my time trying to injure myself.

Likelihood of lasting past one season: Who knows? It’s the CW. It could run for 20 years even if nobody watches it.

CBS. Quirky Italian-American Jersey girl goes to work as an attorney in a high-powered Manhattan firm, outsmarting the other lawyers through a combination of street smarts and Joe Pesci’s accent from My Cousin Vinnie.

Of note: According to Google, this series was canceled yesterday after only two episodes. I could be the only person in America who watched it. And by “in America” I mean “Somewhere over Greenland.”

Quirky British detective, played by Jonny Lee Miller, comes to New York to solve crimes using only the power of deduction and the fact that the NYPD investigators are so profoundly inept that he looks like a genius.

Of note: The creators of the show are listed as Robert Doherty and Arthur Conan Doyle. I think they should go all Hollywood and list him as A.C. Doyle.

Meanwhile, back to the flight

Around hour four I started getting a really bad headache, and by hour seven I also was feeling completely nauseated. I don’t know if it was the airplane food, dehydration, the uncomfortable chair or Made in Jersey, but I felt awful.

By the time we (finally) made our descent into Amsterdam I felt like it was going to be a struggle to hang on without hurling.

I shuffled off of the plane, feeling sick to my stomach, with a pounding headache. The Amsterdam airport is in English with Dutch subtitles, and I found my way through customs to my next gate. I would not learn until later that you go through customs only once when traveling within the European Union — when I got to Barcelona I was just able to walk off the plane and into Spain.

I had about an hour to kill so I took a photo to prove I had been in Amsterdam and then lay down at the gate hoping to settle my stomach and my headache. No such luck. Eventually I boarded a KLM flight bound for Barcelona, replete with KLM flight attendants wearing a shade of blue polyester that can best be described as “Baby bunting.” 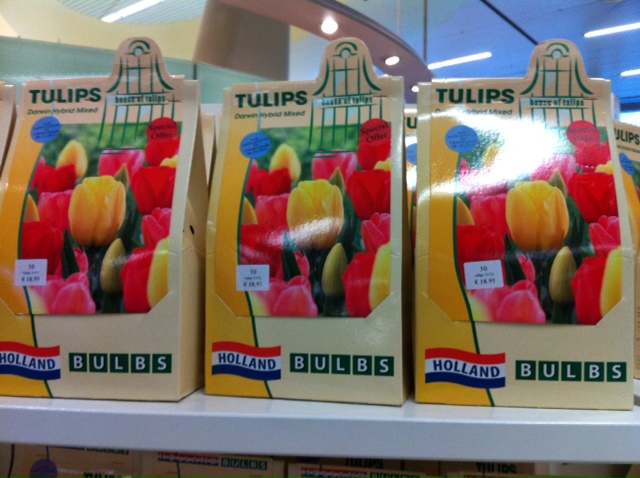 We landed in Barcelona and I reclined on the world’s most uncomfortable airport seats at the gate, for two hours, until I felt able to move again. Then I picked myself up and caught the Aerobus into downtown Barcelona.

My apartment here (thanks AirBnB) is run by a delightful Argentinean expat named Martin who has been in contact since I reseved the place last month and who has been very helpful. For those who recall my adventures to Nicaragua earlier in the year, he also carries the advantage of being “Not a crazy person.”

The apartment is small and comfortable, with a beautiful view of the castle on Montjuich, a mountain overlooking the city. On arrival I walked two blocks to the grocery store to get supplies, then had a fitful night’s sleep as I tried to adjust to a nine-hour time difference.

Yesterday I explored the city, but we’ll save that for tomorrow’s blog when I’ll have more time to write and can update on which other TV series have been canceled. ¡Hasta mañana!