I’m a pretty decent cook, but I jumped at the chance to sign up for a Thai cooking class because I was sure there was some secret to perfect pad thai like “Soak the noodles for five and a half minutes” or “Don’t use McNuggets.” There are dozens of cooking classes to choose from in Chiang Mai, but I went with Thai Farm Cooking because their office is 17 steps from the front door of my guesthouse and the first lesson of responsible travel is “Laziness rules.”

I met at their office at 8:15 a.m. and piled into the back of an open air truck along with Stephen, a chunky retired Aussie with nose hairs you could braid (if you’re into that sort of thing). We swung through town to pick up the rest of the cast of characters: three women from Liverpool on an extended holiday through Southeast Asia; a newlywed couple from London doing the same; a blonde from Long Beach; and a German-Swedish couple and their six-month-old baby. After a bit of shyness, we all introduced ourselves and discussed the weirdest things we had eaten while traveling. Miss California offered up live termites. The Aussie suggested kangaroo. The new bride announced that she was a vegetarian, so “carrot.”

After enjoyed the smoggy ride to nearby Ruamchook Market, we piled out of the truck and had a tour of the various stalls selling the ingredients we would be using that day. I was impressed by the machine that turns shredded coconut into smooth, white coconut milk. Apparently it’s all mechanized like this, so if you had visions of winsome milkmaids taking pails out to the coconut barn, guess again. 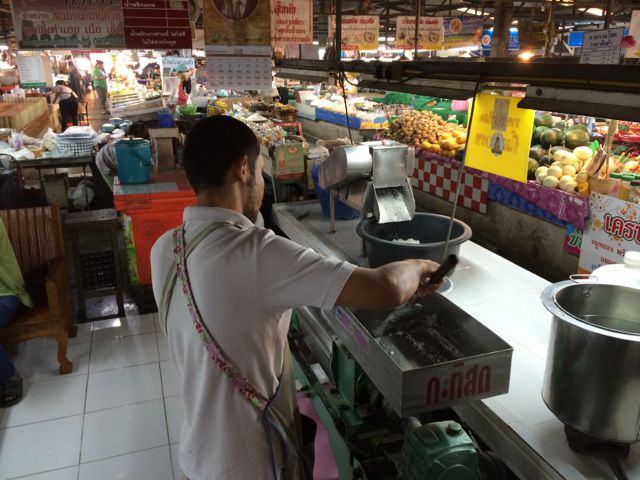 Our guide for the tour was a tiny woman named Pern, who had a great sense of humor and joked repeatedly that we would all get naked soon. I surreptitiously re-read the brochure to see if I’d missed something. But Pern kept cracking jokes and having a grand time as we toured through the market, learning about the different kinds of rices and seeing palm sugar in its natural habitat. Occasionally, triggered by something that someone said, Pern would burst into song, regaling us with stanzas from Lionel Ritchie and Beyonce. She was like a tiny Thai jukebox. 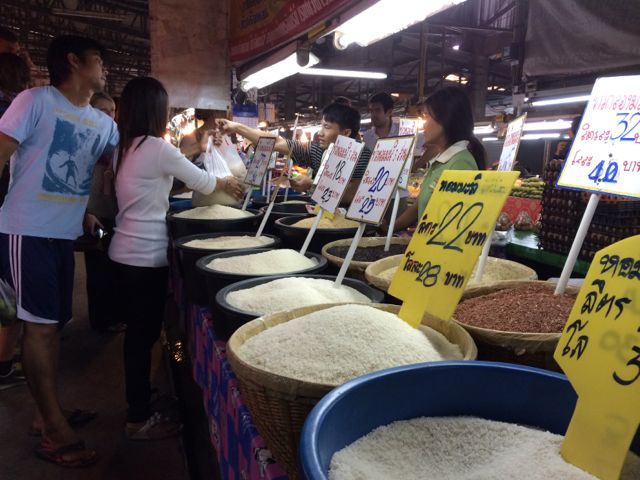 All of this singing, dancing, joking and threatening to get us all naked was frequently interrupted, however, because every time Pern turned around and laid her eyes on the six-month-old baby she COMPLETELY LOST HER SHIT. She grabbed the baby, hugged the baby, kissed the baby, threatened to run away with the baby and generally screamed “Baby! Baby! Baby!” over and over again. She’d be in the middle of explaining the difference between white rice, black rice and brown rice, when she’d pause, run over and snatch the baby out of its parents’ arms, and launch into another round of cooing, cuddling and shouting “Baby!” I’m no psychologist, but I think she’d probably like a baby.

After touring the market for another 10 minutes we piled back into the truck and drove about a half hour to the farm. They have three open-air kitchen huts standing in a beautiful garden. We put on aprons and Pern took us on a tour of the garden, showing us how galangal, lemongrass, kefir lime, spicy basil and other Thai ingredients grow. We picked and sniffed samples from each plant and said erudite things like “This turmeric smells earthy with a hint of loam.” The Aussie asked what the grass under our feet was called and Pern said “Grass.” 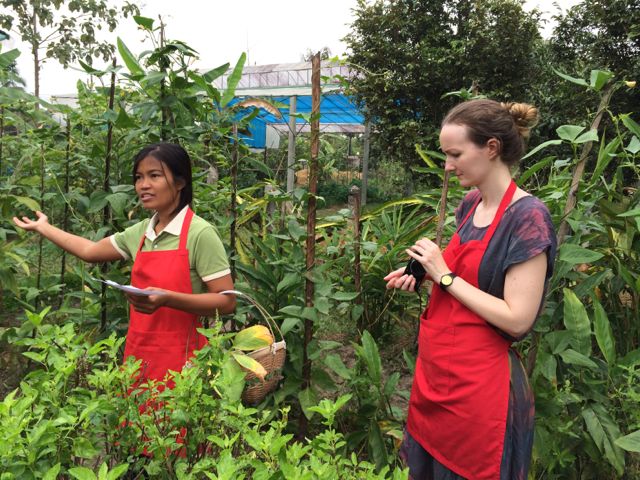 Meanwhile, the entire rest of the sizable farm staff were COMPLETELY LOSING THEIR SHIT over the baby. Every time someone would lay their eyes on the baby they would shriek, start shouting “Baby!” and rattle off a string of either gibberish or Thai while they ran over to grab, cuddle and otherwise admire the baby. I’m not an expert on Thai culture, but I’m pretty sure they have babies of their own. For whatever reason, they just really like babies.

I had read, before coming here, that Thais are a happy people — it’s known as the Land of Smiles. And they weren’t kidding; the Thai people do seem really very cheerful. Anywhere I go, Thai people are laughing, joking, smiling, and just generally enjoying life. The people at the farm — when not attempting to devour the baby — spent most of their time cracking jokes and laughing with each other. 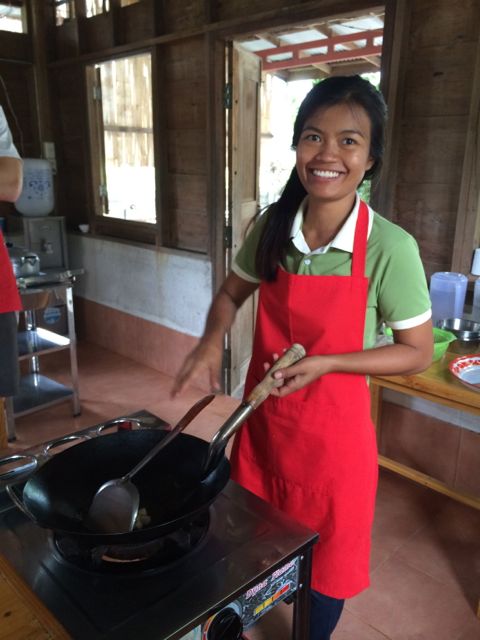 The cooking itself was not especially challenging. For each course, all the ingredients were provided on a platter — some already cut up — so all we had to do was some mild prep work and then cook. Pern walked us through all the steps, and it was pretty foolproof, except for the girl from California who seemed to mess up each dish. She later confided in me that she had been unable to find lemongrass in Long Beach, but that she had looked in the Home Depot garden section. 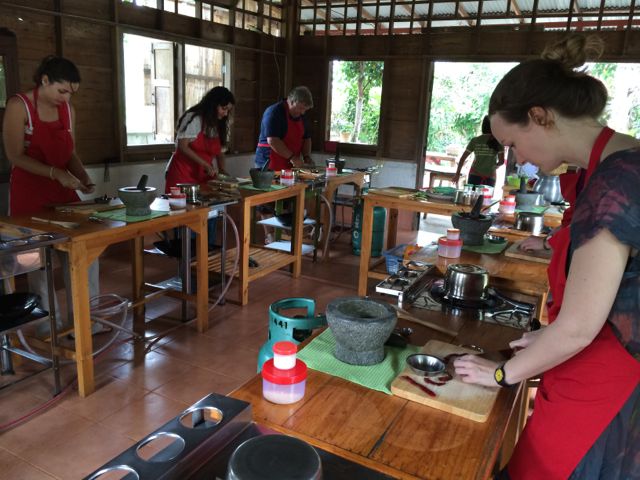 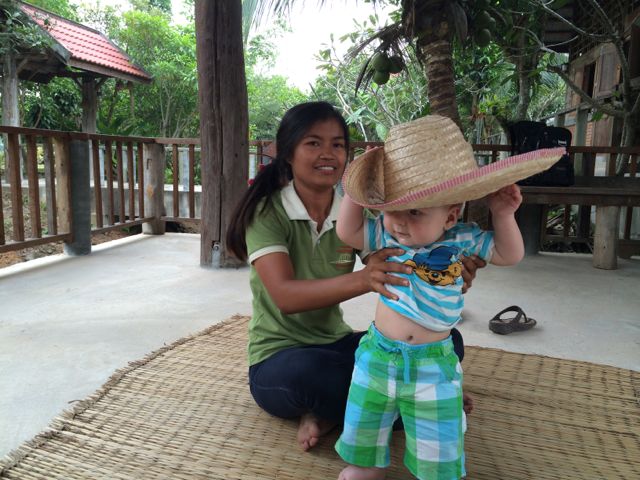 Sorry, I got distracted there. As I was saying, the secret to Thai cooking is fresh ingredients, in the right proportions, cooked simply. I did learn a few useful cooking details and I’m excited about cooking Thai when I get home and seeing if I can duplicate the magic.

Here’s a brief rundown of the dishes I cooked:

First we made our own yellow curry paste, pounding chile, ginger, turmeric, curry powder and lemongrass in a heavy mortar and pestle for about 10 minutes. I’m glad I do CrossFit. 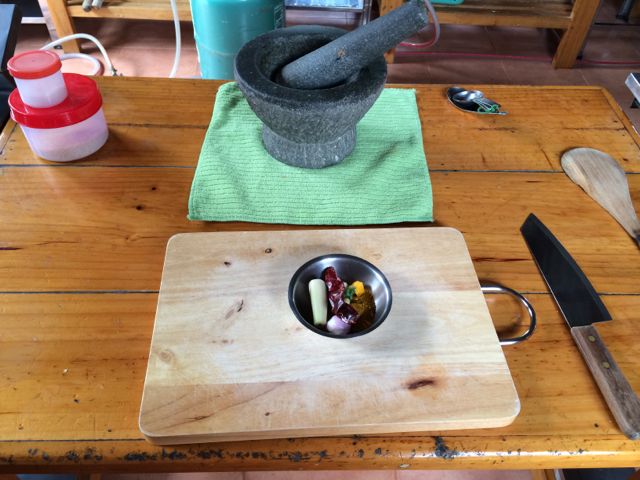 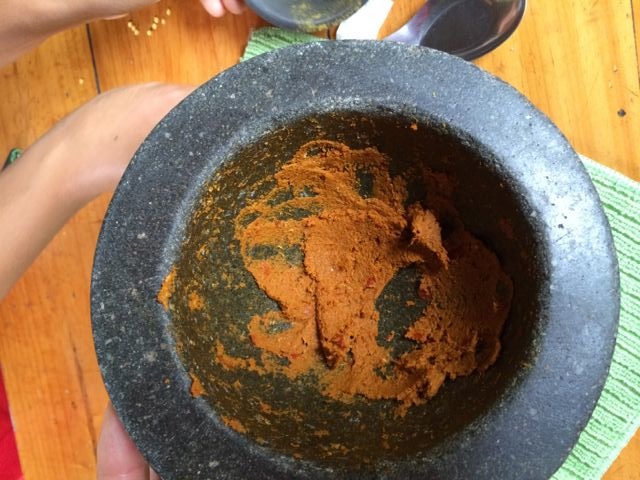 Then, with our plate of ingredients, we did some light chopping and made a tom ka gai (coconut chicken) soup. 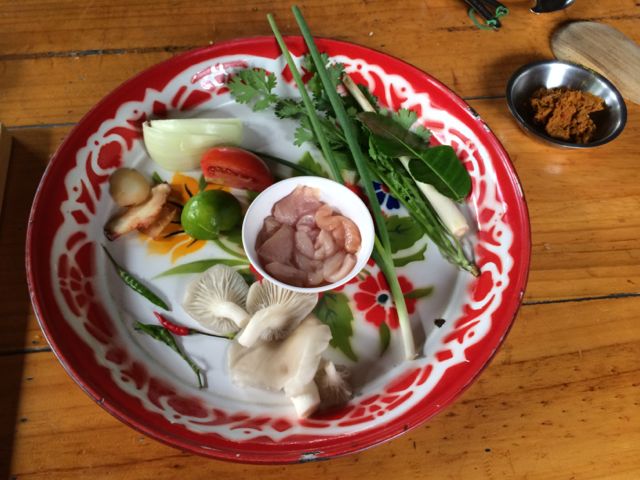 Delicious! Cate and Deeta from the UK carefully examine their own soups before digging in. 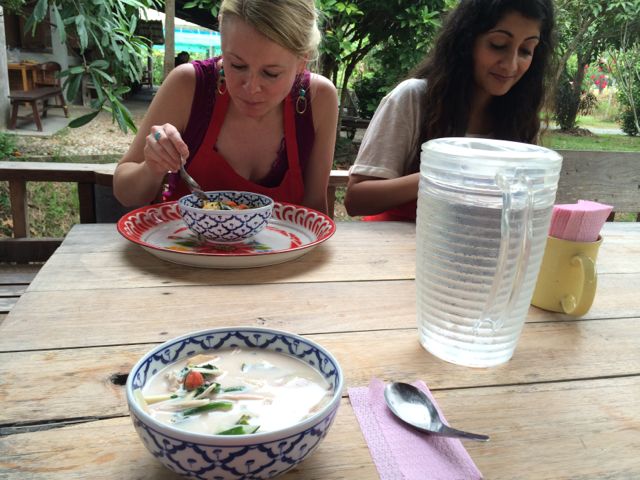 Next I assembled a cashew chicken stir fry. 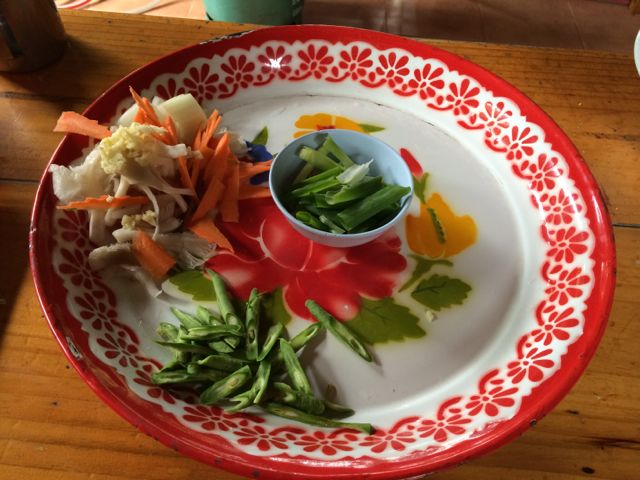 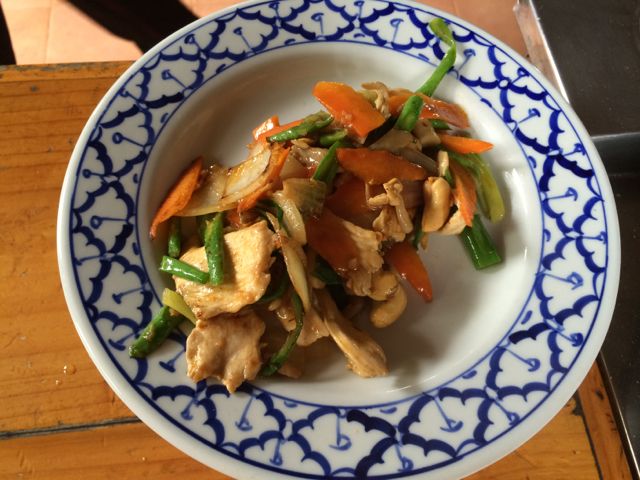 We were ALL extremely full by this point, and everyone groaned when it was time to go back into the kitchen to make noodle dishes. I learned how to make pad thai, and then I made my own dish, which was a wide noodle dish commonly called pad see ew in restaurants. I ate half of it before I remembered to take a photograph. I’d be a really bad professional food photographer. 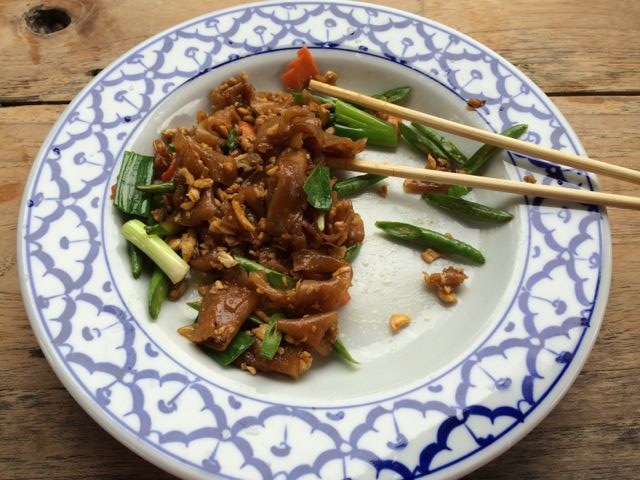 And finally, though I was sure I wasn’t going to eat another bite, we made coconut rice with mango. I ate the entire thing. So delicious! 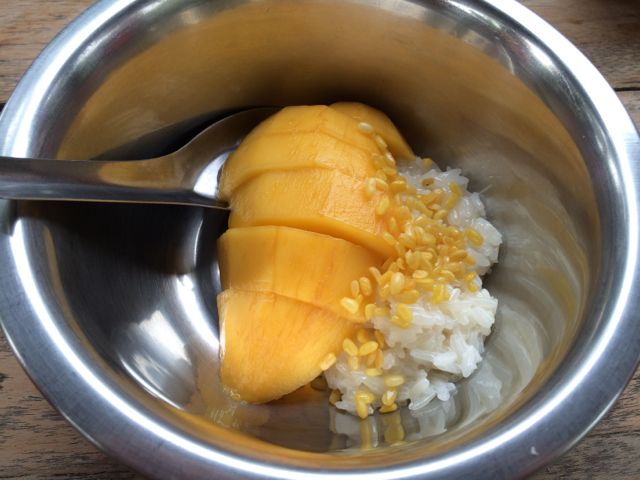 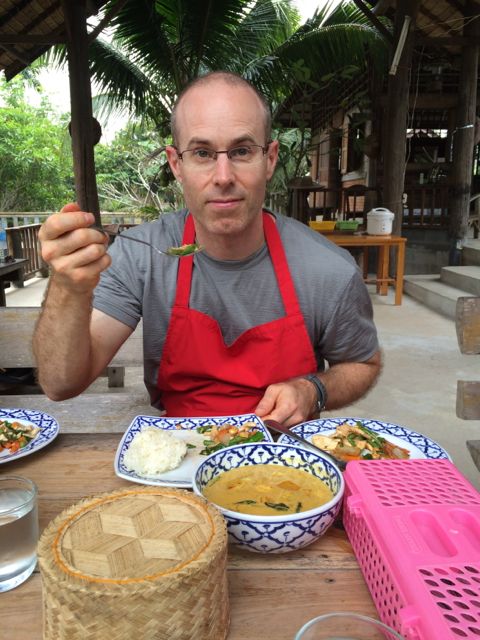