You know how you sometimes do something where you know it’s a bad idea but you do it anyway because you’re too lazy to do the right thing? No? Perhaps you don’t live in my head.

I had my latest willfully stupid moment yesterday when I did some laundry in the shower (that’s not the stupid part) and hung the laundry on the balcony railing to dry, thinking to myself “If any kind of wind comes up my clothes are going to blow off the balcony onto the adjacent roof.”

I should add that one of the hallmarks of Granada is gale force winds coming off of the nearby lake.

Sure enough, when I returned two hours later, my clothes were dry, and one of my shirts was taunting me from the adjacent rooftop. Ten minutes of shirt fishing later, I had my full wardrobe back. This casa has a suspicious number of available shirt fishing poles. In other news, Roberta the housekeeper showed up yesterday and announced that it was to be her last day on the job. She had decided to start taking business administration classes in Managua, commencing immediately. She didn’t seem too broken up about surrendering her lucrative career in cleaning houses for lunatic American landlords.

She and I sat in the living room for a few minutes while she detailed her career plans. I nodded and smiled and interjected with the occasional “Sí” or “¡Como no!” to create the impression that I could understand more than half of what she was saying. Then I gave her a tip that was somewhere between “token gesture” and “my life savings.” I still haven’t gotten a strong handle on the exchange rate.

After sending her on her way to the big city, I walked over to get a foot massage at Seeing Hands Massage. This is an organization that trains blind people in developing countries so they can earn a living giving massages. The massage was on the upper balcony of the Euro Cafe, both me and the masseur in rocking chairs. It was a very excellent massage, and all of $6 for a generous 20 minutes.

Today I took a sunset tour to Volcán Masaya, a semi-active volcano about a half hour from Granada. Despite assurances to the contrary, all the signage at the volcano led me to believe that the volcano might be more active than the tour company is letting on. Its last full-blown lava-spewing eruption was allegedly in the 1700s, but then they casually mentioned during the tour that there was some sort of “event” in 2001. I should mention that they insisted on pre-payment for the tour. From the parking lot (or “Death staging area,” as I believe it should be known), we hiked up 170 steps to a cross overlooking the crater. It was a pretty spectacular sight, definitely showing the power of the previous eruption. The volcano was still steaming and bubbling and you could hear it rumbling down below. Our tour guide suggested we should sacrifice a virgin; there didn’t seem to be any candidates. For the next hour or so we hiked around the various craters on the volcano, and like the tour participants themselves, some were more dormant than others. We watched a lovely sunset from the highest crater rim, with spectacular views as far as Managua and Lake Nicaragua.

As dusk settled in, we donned hardhats and flashlights (well, we didn’t technically “don” the flashlights) and hiked a through a copse of trees to the entrance for a lava tube. We spelunked our way a few hundred yards into the lave tube, with bats whisking over our heads as we walked. Deep inside the cave, we pointed our flashlights at the ceiling and saw bats hanging upside down by tree roots. I cannot even express how adorable this was. After we left the cave we hiked back up the trail a little ways and detoured into the entrance of a smaller cave opening, where we sat quietly with our flashlights off as hundreds of bats flapped and whisked past us just inches from our heads. Every so often we’d turn on a light just for a second to see swarms of bats flying past. It was stunning.

Moments later we all trained our flashlights on a slow-moving Mexican porcupine, which was both adorable and very much not close to Mexico. 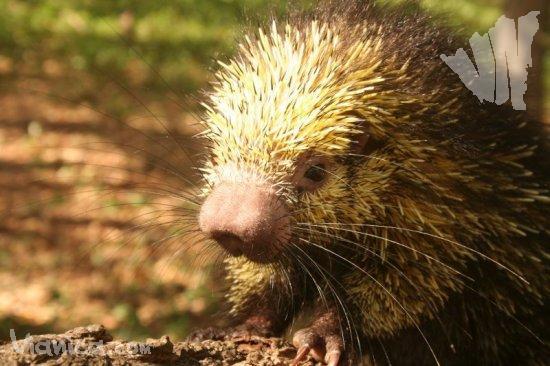 Our final stop on the tour was a chance to peer down into the main crater from the lower rim. At night, you are sometimes able to see glowing magma. Alas, we were not, but we still had to don protective gas masks just to leave the van. Even after just one minute outside the van wearing a gas mask, my lungs and eyes were burning from the sulfuric acid. This part of the tour wasn’t mentioned in the brochure. I don’t know how you say “irreversible respiratory damage” in Spanish.