I’ve been packing in the sightseeing over the last few days, since I’m leaving Nicaragua on Wednesday. Life is good. The power has stayed on. The internet has stayed up. The landlord has gone out of town. Even the mosquitos have done their part to make sure that I don’t ever get lonely.

I decided to pay a visit to all of Granada’s museums in one day. Luckily, Granada only has two museums and they’re right next door to one another. They’re also free and largely deserted. This makes it very easy to pack a day of high culture into about 45 minutes.

The most interesting thing at Mi Museo were a series of large burial urns created by the pre-Columbians. They are shaped like a pregnant belly, with decorations on the sides that look like fallopian tubes. The belief was that the people whose remains were interred in these urns would be re-born. The pre-Columbians thus demonstrated a grasp of human reproduction that was just slightly less primitive than that of Rush Limbaugh. 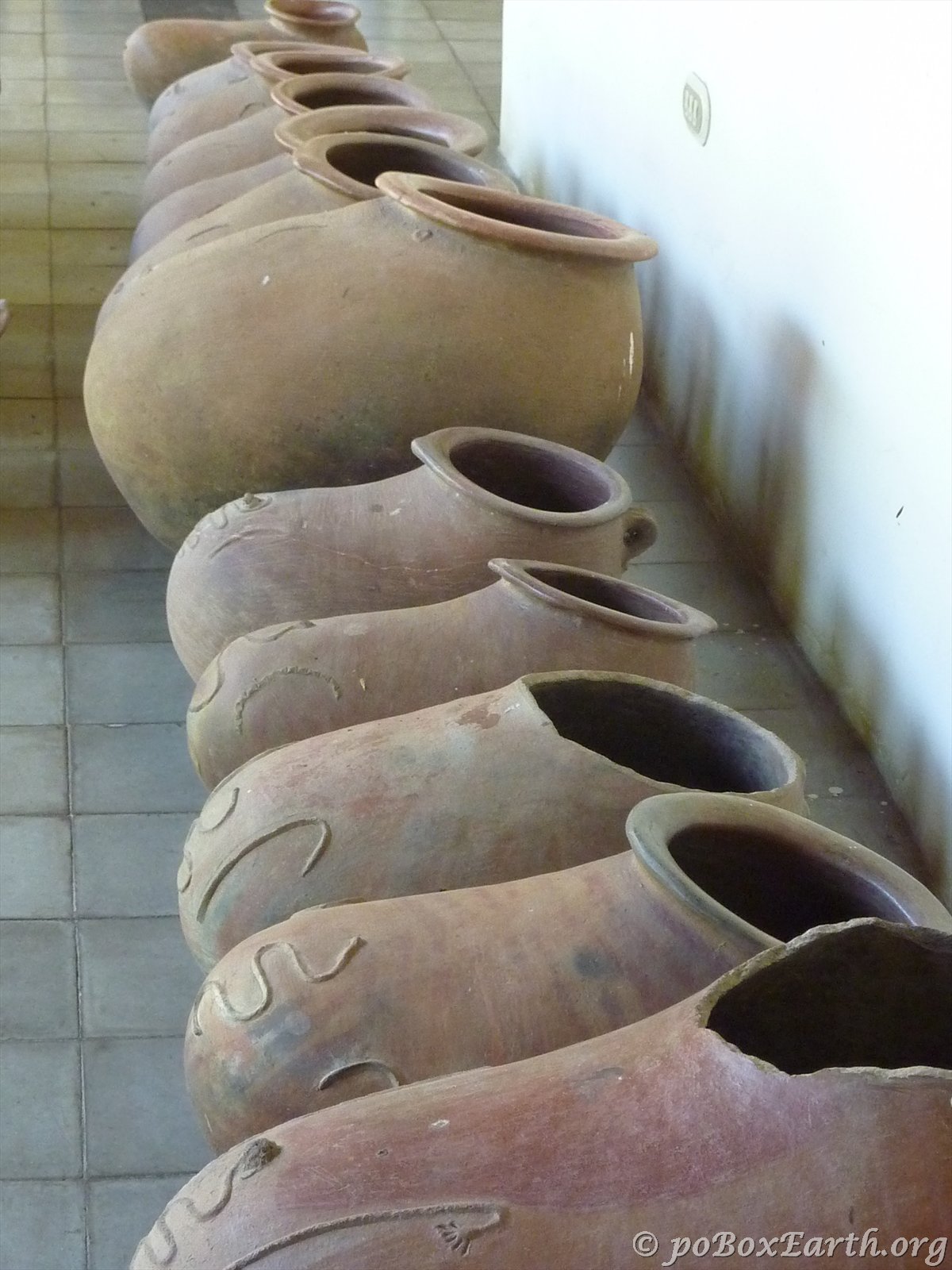 This was just the warm-up museum, because the main event was waiting for me next door — the ChocoMuseo. Yes, an entire museum devoted to chocolate.

After making the long five second trek to the adjacent building, I discovered that the ChocoMuseo had the complete history of chocolate, from its discovery by the Mayans, refinement by the Aztecs, flavoring by the Spaniards and bastardization by the Hershey company. OK, I made that last part up. But there was a lot of chocolate history. Purportedly, the Spanish were the first to figure out that chocolate would taste good with sugar in it. Apparently they had never spent time with a six-year-old and a handful of sugar packets at a diner.

There were also posters touting the health benefits of chocolate. From the museum’s perspective, chocolate is the healthiest substance known to man. And boy were they selling it without a prescription. They had chocolate bars, chocolate pieces, chocolate syrup, chocolate powder, extra-strength chocolate capsules. It was a chocopalooza.

I learned a lot about how chocolate is harvested and refined. The chocolate beans grow in giant pods, and are harvested, soaked, skinned, dried, hulled, roasted and crushed. I have no idea how the Mayans figured out that the big pod with the bitter seeds would be delicious after all this processing. They must’ve had a lot of spare time when they weren’t predicting the end of the world or building sets for Star Wars.

Naturally, the museum grows, processes and refines their own chocolate, so in order to do some quality testing I ordered a hot chocolate from the ChocoMuseo’s café. It contained one part milk and approximately 700,000 parts chocolate syrup. I considered whether it would be easier to eat with a fork and knife. It was also delicious. Sort of like Swiss Miss Instant Hot Chocolate but the exact opposite.

My sightseeing adventures continued today with a tour of Las Isletas in Lake Nicaragua. There are 365 (or so) islands near the shoreline of the lake, ranging in size from many thousand square feet to just a tiny rock jutting out of the water. They are all privately owned, and many of them have homes ranging from “quaint shack” to “Oh my God, I think that’s Johnny’s Depp’s vacation home!”

At the tour office I met a few of the other sightseers — a pair of gals from Sweden who are on a month-long trip backpacking around Central America, and a guy from London who wore an off-color t-shirt and complained about the quality of pizza toppings in Nicaragua. At the last minute, a group of three women and one man from Miami showed up, and they proceeded to spend most of the tour discussing the TV show Hoarders in loud tones. We all piled into a tour van and made the 10 minute trek to the boat launch. There were a lot of random cows by the side of the road on this day. At the dock we climbed into the boat and our tour guide, Francisco, introduced himself. He was somewhat less garrulous than the last tour guide I had, by which I mean he occasionally stopped to breathe.

The isletas reminded me a little bit of how I imagine the Florida Everglades must look, only with fewer crocodiles. We boated through marshy areas, around small and big islands. Francisco pointed out many amazing birds — herons, kingfishers, ospreys, leggy shore birds and and the montezuma oropendula, a beautiful bird that builds spectacular hanging nests. Francisco made sure to point out that, unlike most birds, the male of the species builds the nests. The gals from Miami responded by discussing dead cat skeletons on Hoarders. Francisco was a big fan of flowers. When he saw a flower he wanted to show us he would instruct the boat driver to pull over, and then he would pick the flower and bring it on board. By the third time he did this we were pleading with him to stop picking the flowers, but he wanted to show them to us up close and personal. I don’t know how many tours he gives per week, but he is personally deforesting Nicaragua.

A few minutes later we reached Monkey Island, where four spider monkeys were once deposited and now make their home. I half expected Francisco to spear a monkey and bring it aboard to show us, but instead he just tossed a half piece of fruit to one of the monkeys, who came running over excitedly when it saw the boat coming. The Hoarders gals took a break from discussing reality TV to coo over the monkeys, and the Swedish girls called out to the monkeys in Swedish. I suspect it was something along the lines of “Take a chance on me.” After the monkey encounter we docked at a small island that contained a restaurant, macaw, parrot, two dogs and a pool. The Brit and one of the Miami gals went swimming in the lake, the Swedes sat near the pool drinking beers and I took a nap. I’m not a big swimmer to begin with, and considering the near-black murkiness of the lake, you couldn’t pay me enough money to go in there. Apparently the sharks are gone, however. Francisco said that some Japanese fishermen showed up a few years ago, caught 20,000 sharks out of the lake to make soup, and they (the sharks, not the Japanese) are only just now starting to come back near the mouth of the San Juan River, which is across the lake from Granada.

(If you just came here from Google, I can’t promise that anything in that previous paragraph is true. I’m paraphrasing a Spanish conversation carried on between a cheeky tour guide and two Swedish girls. Some details may be off.)

Eventually we piled back back into the boat and sat out in the middle of the very choppy lake for 20 minutes watching the sunset and getting rapidly seasick. We then docked and drove back to the tour office, stopping on the way to hop out of the van and photograph a Catholic procession, which apparently happens each of the 40 days leading up to Easter. Again, some of these details may be fuzzy, as both my Spanish and biblical knowledge are shaky.

I have another tour coming up on Sunday, and then a couple more days in Nicaragua before heading home. A last note: I discovered The Simpsons in Spanish on TV last night, and the voices sound just like the voices in English. It is hysterical to hear Bart Simpson sound like Bart Simpson, only in Spanish.