Spain is good at basketball. Really, really good. Arguably, other than the United States, they’ve been the best national team in the world over the past few years. Of course that’s like saying “Other than Facebook, MySpace has been the most popular social network over the past few years.” Still, while in Barcelona, I thought this would be a great chance to check out some exciting Euroleague action.

The Euroleague (officially known as “Turkish Airlines Euroleague” due to an ill-considered sponsorship deal) is a conglomeration of teams from countries across Europe and Russia, divided into pools and playing each other in a schedule that I can neither make heads nor tails of. Similar to soccer, teams sometimes move in or out of the league depending on how they finish their season. In addition, the founders of the original Euroleague forgot to trademark the name “Euroleague,” so in the 2000 season someone else snapped up the name and started a competing Euroleague. For a year the Euroleague and the “FIBA Suproleague” went head to head until they merged the following season. If this comes a surprise to anyone who follows European sports, you probably need to get out more.

Fans of the NBA are well acquainted with the Euroleague, as many top players such as Dirk Nowitzki, Pau Gasol and Tony Parker came from there. Blazers fans know Spanish league players Rudy Fernandez and Sergio Rodriguez, and this season will be cheering on (maybe) Victor Claver and Joel Freeland.

Buying a ticket is really, really easy, using Spain’s equivalent of Ticketmaster. The company is also a major provider of an ATM network throughout Spain, so after you make your purchase online you can go to any of their ATMs, insert your credit card and print your tickets right at the ATM. How crazy convenient is that?

The official team name is Regal FC Barcelona — yes, the “FC” stands for “Football Club” since the massive FC Barcelona club that operates the (much more important) soccer team also operates the basketball team (as well as roller hockey, ice hockey, futsal and team handball). They play at the arena Palau Blaugrana, which sits (literally) in the shadow of the massive Camp Nou soccer stadium near Barcelona University in the northwest section of town. It’s a fast metro ride from my apartment.

Palau Blaugrana is no NBA arena. It was built in 1971, holds 7,000 people (maybe) and doesn’t have anything in the way of amenities such as food, beverages or vendors selling giant foam fingers. Its seats make the chairs at an airport gate seem like luxury leather recliners. What the stadium does have is amazing sightlines, since even my 9€ ticket put me mere feet from the court. A similar seat for an NBA game would cost hundreds of dollars. 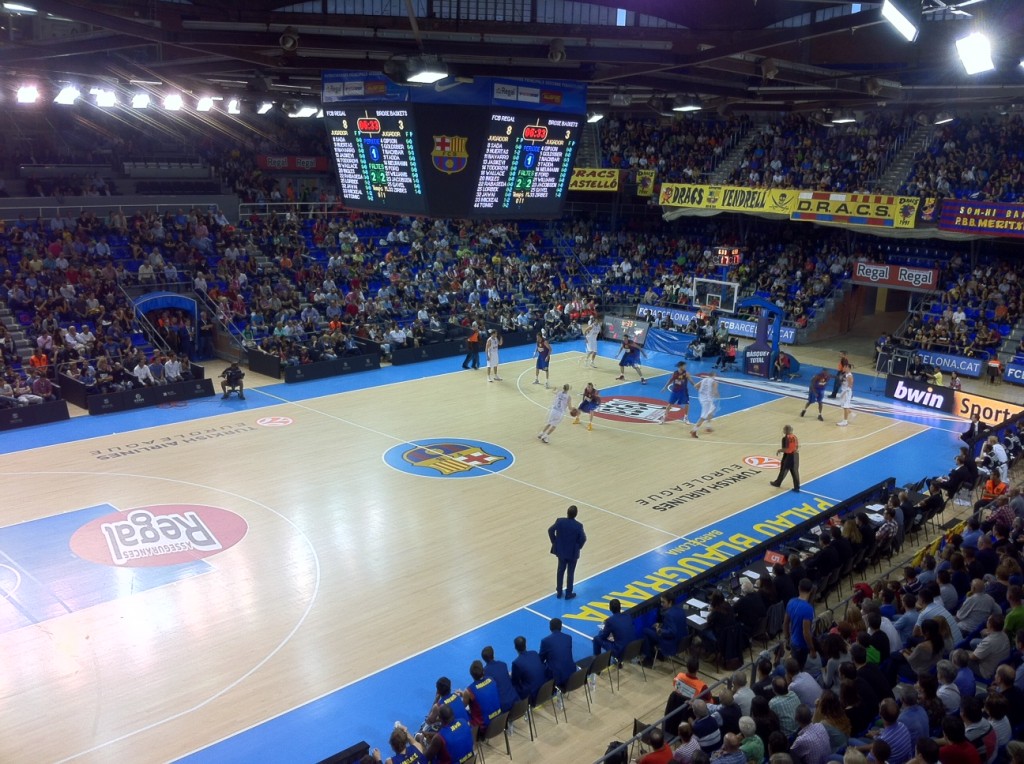 The stadium was about 3/4 full, including two separate drum sections who alternated drumming and chanting during the entire game. It had more of the atmosphere of a soccer crowd than a basketball crowd — those who have been to Portland Timbers games would recognize some of the coordinated cheers that the drummers led for the audience.

Overall, it’s definitely less of a spectacle than an NBA game. In fact, with five minutes left in warm-ups the players went to their benches and were introduced by the PA announcer (they were all introduced — not just the starters). Then they went back to running layup drills until it was time to start the game.

Barcelona does, however, have its own dance team, just like any NBA squad. They started out in high-top tennis shoes and each time they came out to do a new dance they were in progressively higher heels, until by their final routine I was expecting them to twirl around on a pole and take off their tops. They did not. 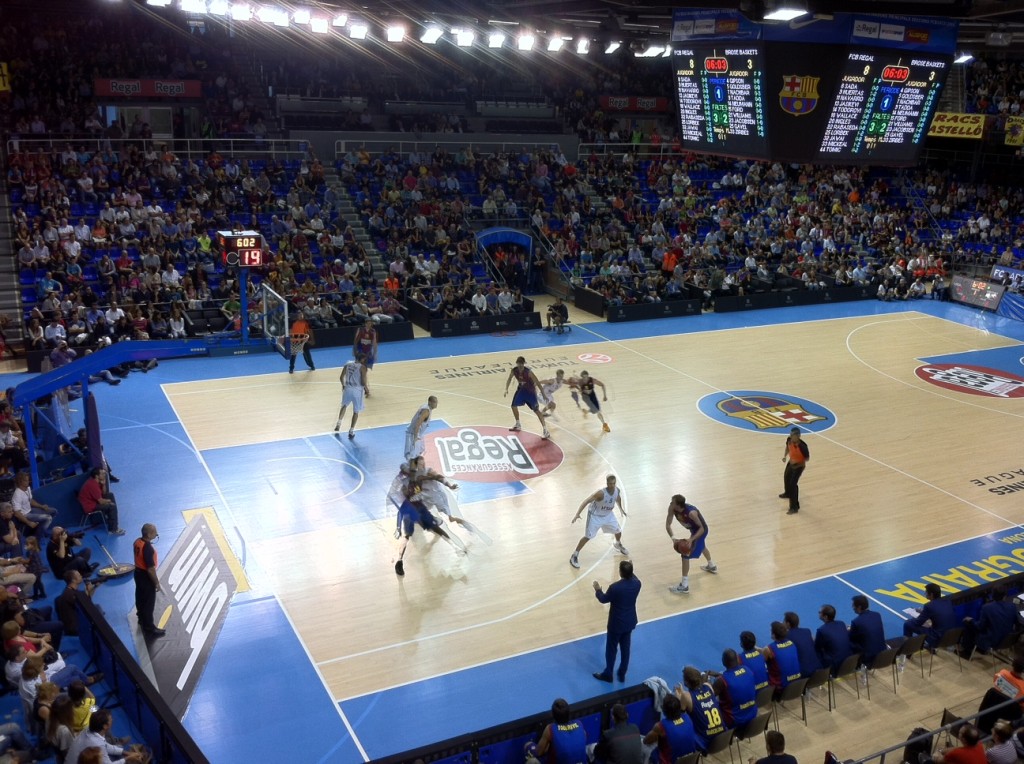 The game itself was a bit of a wash. Barcelona jumped out to a 19-3 lead on Germany’s Brose Baskets Bamburg squad and were never threatened for the rest of the match. Barcelona is led by Juan Carlos Navarro, who has captained their national team and is considered one of the country’s best players (he played a season with the Memphis Grizzlies before deciding to return to Spain). The fan favorite was Šarūnas Jasikevičius, a Lithuanian who played in college at Maryland and in the NBA with several teams. He led Barcelona to the Euroleague championship several years ago and just returned to the team this season. Trivia: I think I got carpal tunnel just typing his name.

Brose Baskets was led by Slovenian superstar Boštjan Nachbar, who some of you (Bill Evans) may remember from a decent NBA career. He scored 2o points, while nobody else on the Baskets reached double figures. Brose also featured Casey Jacobsen, who starred at Stanford (ding) and kicked around the NBA for a few teams.

Warning: If you’re not really a sports fan but you’ve read to this point because you’re kinda interested in what I have to say, this next paragraph is going to get super geeky into basketball strategy. Feel free to resume reading after this paragraph.

The European game is more about ball movement than the NBA game. Whereas in the NBA most teams tend to run isolation plays for their stars and let them go 1-on-1 trying to take their defender off the dribble, in the Euroleague there’s a lot more passing and looking for the open shot. What there wasn’t a lot of was running or dunking. I counted zero fast break points and zero dunks. Both teams seemed to retreat any time a shot went up rather than sending guards in looking for rebounds. And even when the Barcelona center got the ball down low without a defender in front of him, he simply dropped in a layup rather than throwing down a dunk. I know they must dunk sometimes in the Euroleague, because the players who come to the NBA seem to understand how to insert the ball into the basket in the manner of a dunk when given a chance. But in this game at least, nobody seemed too inclined to jam one home.

With four 10-minute quarters, no TV timeouts, a limited number of team timeouts and a general game pacing that felt like the referees were double-parked, the entire game from tipoff to final horn took 93 minutes. This is an hour shorter than the average NBA game, although in fairness with the lack of a live Jumbotron we were denied the entertainment bonanza that is the KissCam. Luckily, on the metro ride home, a frisky couple re-enacted the SitInTheLapKissCam right next to me, so I felt that I got my money’s worth.